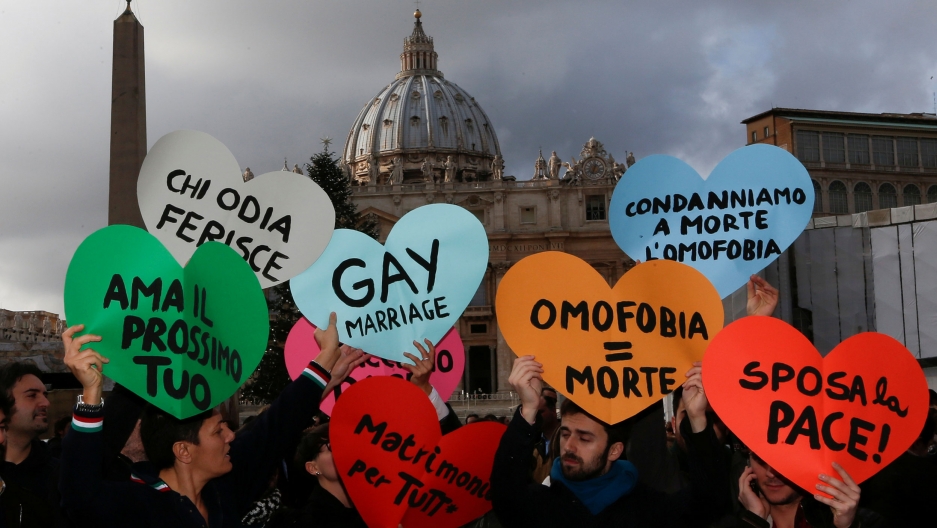 Members of a LGBTQ activist group hold signs in front of St. Peter's square in the Vatican.

The Vatican on Monday condemned gender theory saying in a new document written by the Congregation for Catholic Education that the idea of gender being determined by personal feeling rather than biology was an attempt to "annihilate nature."

LGBTQ rights advocates denounced the 30-page document, called "Male and Female He Created Them," as harmful and confusing, saying it would encourage hatred and bigotry.

The document, the Vatican's first on gender theory was written as an "instruction" to Catholic educators on how to address the topic of gender theory in line with Church teaching.

The document was released as the LGBTQ community around the world have been celebrating Pride Month amid a surge in demands for acceptance of the idea that gender is more complex and fluid than the binary categories of male and female, and depends on more than visible sex characteristics.

"The concept of gender is seen as dependent upon the subjective mindset of each person, who can choose a gender not corresponding to his or her biological sex, and therefore with the way others see that person," the Vatican booklet says.

It says gender theories are "often founded on nothing more than a confused concept of freedom in the realm of feelings and wants, or momentary desires provoked by emotional impulses and the will of the individual, as opposed to anything based on the truths of existence."

Francis DeBernardo, executive director of New Ways Ministry, which seeks to reconcile LGBT Catholics and the institutional Church, called the booklet "a gross misrepresentation" of the lives of LGBTQ people that could encourage violence against them.

"The misinformation the document contains will cause families to reject their children, and it will increase alienation of LGBT people from the Church," he said in a statement.

While the document is not signed by Pope Francis, it several times quotes from his speeches and teachings and those of previous popes. It was issued with little advance notice to reporters and without the customary news conference.

It denounced theories that attempted to "annihilate the concept of nature" and "educational programs and legislative trends that ... make a radical break with the actual biological difference between male and female."

A prominent American Jesuit writer, Father James Martin, tweeted: "The document is mainly a dialogue with philosophers and theologians, and with other church documents; but not with scientists and biologists, not with psychologists, and certainly not with LGBT people, whose experiences are given little if any weight."

DeBernardo added: People do not choose their gender, as the Vatican claims, they discover it through their lived experiences. The Church should respect and encourage this process of discovery, because it is a process by which individuals discover the wonderful way that God has created them."