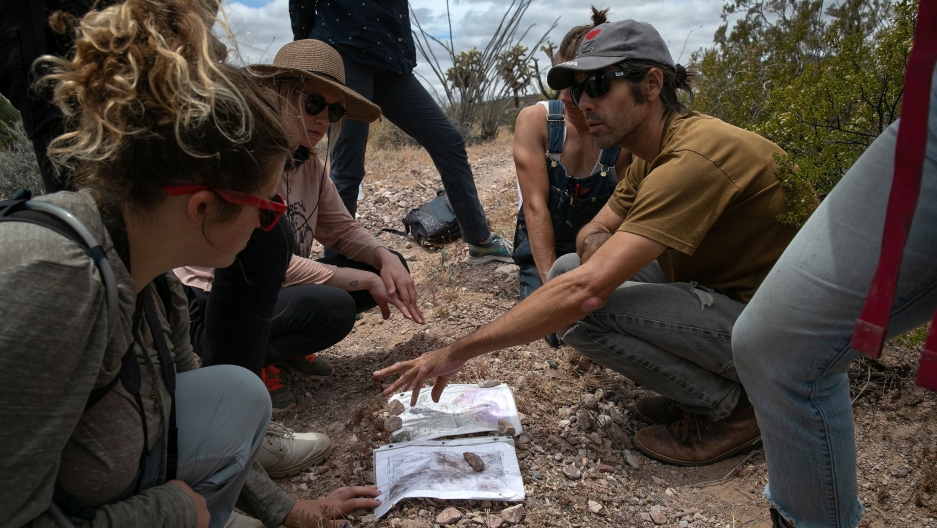 Scott Warren, (right), a volunteer for the humanitarian aid organization No More Deaths, speaks with student volunteers delivering food and water along remote desert trails used by undocumented immigrants, on May 10, 2019. He faces up to 20 years in prison for helping shelter and transport two migrants.

The first building you see driving into Ajo, Arizona, from Tucson is a squat stand-alone square with a small strip of sidewalk in front. This week, it will take on a new role as the Ajo Humanitarian Aid Office.

“It’s a space that will be shared by a number of humanitarian aid groups,” says John Orlowski, a volunteer with the Ajo Samaritans.

There is a storage closet filled with donations — jackets, pants, shoes and shirts — that will be given to migrants at shelters in Mexico and a large room for meetings. Maps cover multiple walls and a small lending library of books on border issues is tucked into a corner.

This new office will function as a place where the many humanitarian aid groups working in the desert around Ajo will be able to hold meetings, organize with one another and interact face-to-face with members of the local community. Orlowski says the plan is to make it comfortable and to offer a cup of coffee and information to “anyone passing through who wants to know more about the work we do.”

The office is opening at a crucial time for humanitarian aid groups in Ajo.

Scott Warren, an Ajo resident and volunteer with a number of these groups, is on trial this week in federal court in Tucson. He’s accused of giving two undocumented men medical attention and allowing them to stay for a few days in another shared space and clinic called “The Barn.” He’s charged with two felony counts of harboring and one of conspiracy to transport the two men. If convicted, he faces up to 20 years in prison. 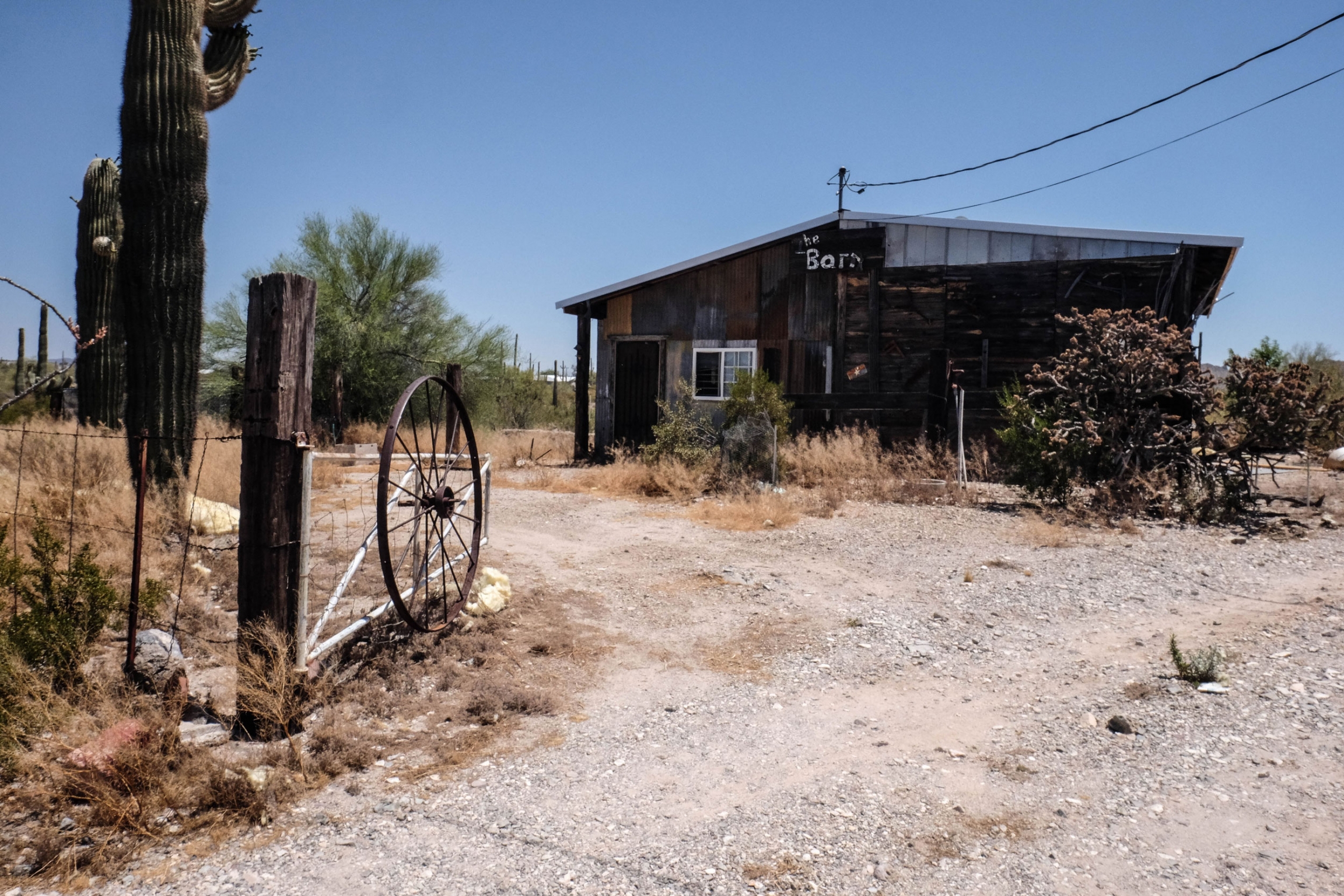 "The Barn" in Ajo, Arizona, where Scott Warren is accused of sheltering two undocumented men.

Ajo has become a center for humanitarian aid groups working on the border because of its unique location. It’s a tiny island in the middle of vast swaths of desert controlled by the Bureau of Land Management, the nearby Tohono O’odham nation and the US Air Force at the Barry Goldwater Range.

This part of the desert is one of the most fatal for crossing migrants.

Propped against a wall in the aid office is a map covered in red dots. Each one marks the location of a set of migrant remains as recorded by the Pima County Medical Examiner’s office. Since 2000, more than 3,000 migrant remains have been found along the Arizona-Mexico border. Last year, 127 migrant remains were found in southern Arizona. 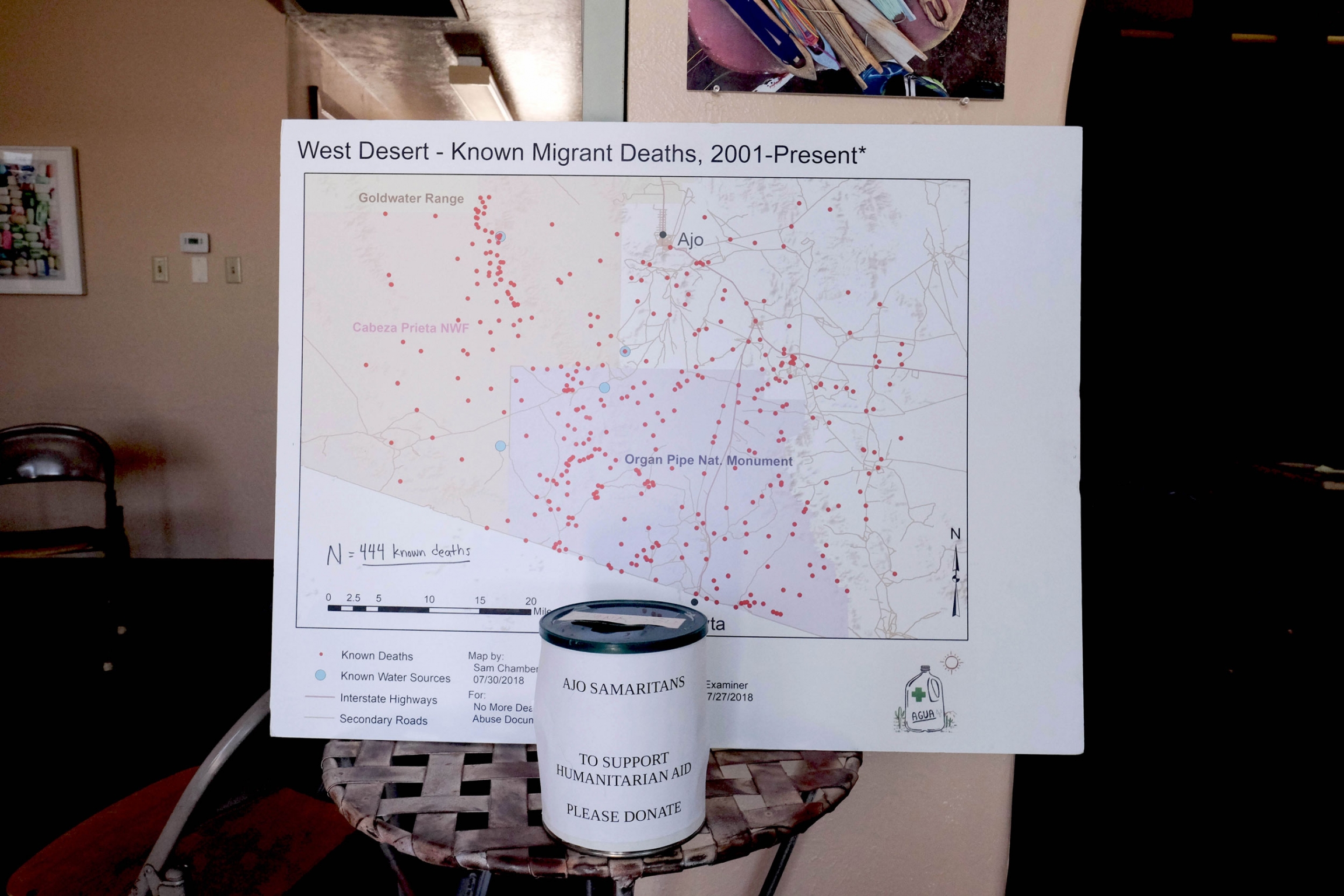 Inside the Ajo Humanitarian Aid Office is a map of the area that is covered in small red dots. Each dot marks the location where set of migrant remains were found and recorded by the Pima County Medical Examiner’s Office.

This year is on track to be just as deadly, Orlowski says.

“Since [Jan. 3] in the Ajo area, 36 human remains have been found,” Orlowski says. “Thirty-six people have died in the desert in, near and around Ajo.”

Some residents of Ajo, like Kenneth Freese, an 89-year-old veteran, think that the water that humanitarian aid groups leave in the desert encourages migrants to cross.

Freese used to serve on a local community council with Warren, the volunteer on trial. He thinks that the outcome of the trial could set an example for other aid workers in Ajo.

“If he gets convicted and he has to serve time, that should be an incentive to the people here to obey the law.” 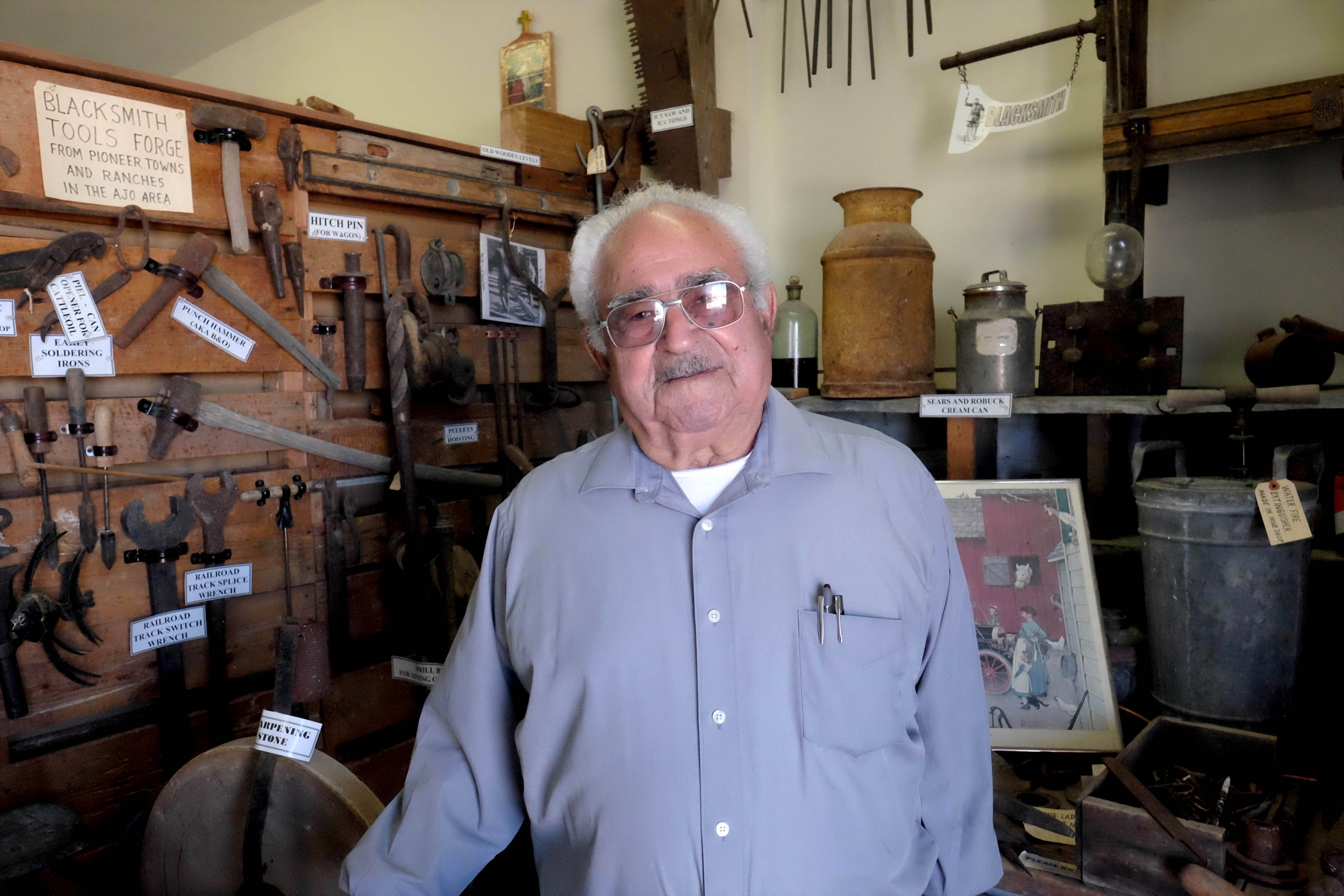 José Castillo, a longtime resident of Ajo, stands in front of a wall of photos and news clippings at the Ajo Historical Society Museum, where he is a volunteer.

José Castillo was also born in Ajo. He worked for decades in the local mine and is known around town as the go-to Ajo historian. He says that residents here have helped people for as long as he can remember.

“In the desert, you learn at an early age to help people,” Castillo says. “The desert is beautiful, but there’s no water.”

Castillo used to hike water into the desert with local aid organizations, but now, at 80, he does what he can from town. He’s afraid that if Warren is convicted, more people in Ajo may be afraid to give water to people in desperate need.

“If he loses, I’d be afraid to share a glass of water with you,” Castillo says. “That’s not humanity, I don’t think.”

“If he loses, I’d be afraid to share a glass of water with you. That’s not humanity, I don’t think.”

On a recent Saturday, Orlowski and Victor Garcia, another volunteer, pack up backpacks for a day in the desert doing water and food drops. They load up cans of beans with pop-top lids, trail snacks, granola bars, power bars and jugs of water.

They hike out in the blazing sun to a thicket. They cut through some brush along the way, to the place marked on their GPS as an established water dorp. There’s a bucket full of supplies from a previous drop filled with clean socks and snacks, and there are still a few gallons of water.

“This is likely not a common path anymore,” Orlowski explains.

Routes shift and his volunteer group is trying to keep up with new demands.

After almost three hours and two drops, Orlowski and Garcia head back to Ajo just before noon. The sun is high in the sky and the temperature is about 100 degrees.

This drop will have to be checked again within the next few weeks. 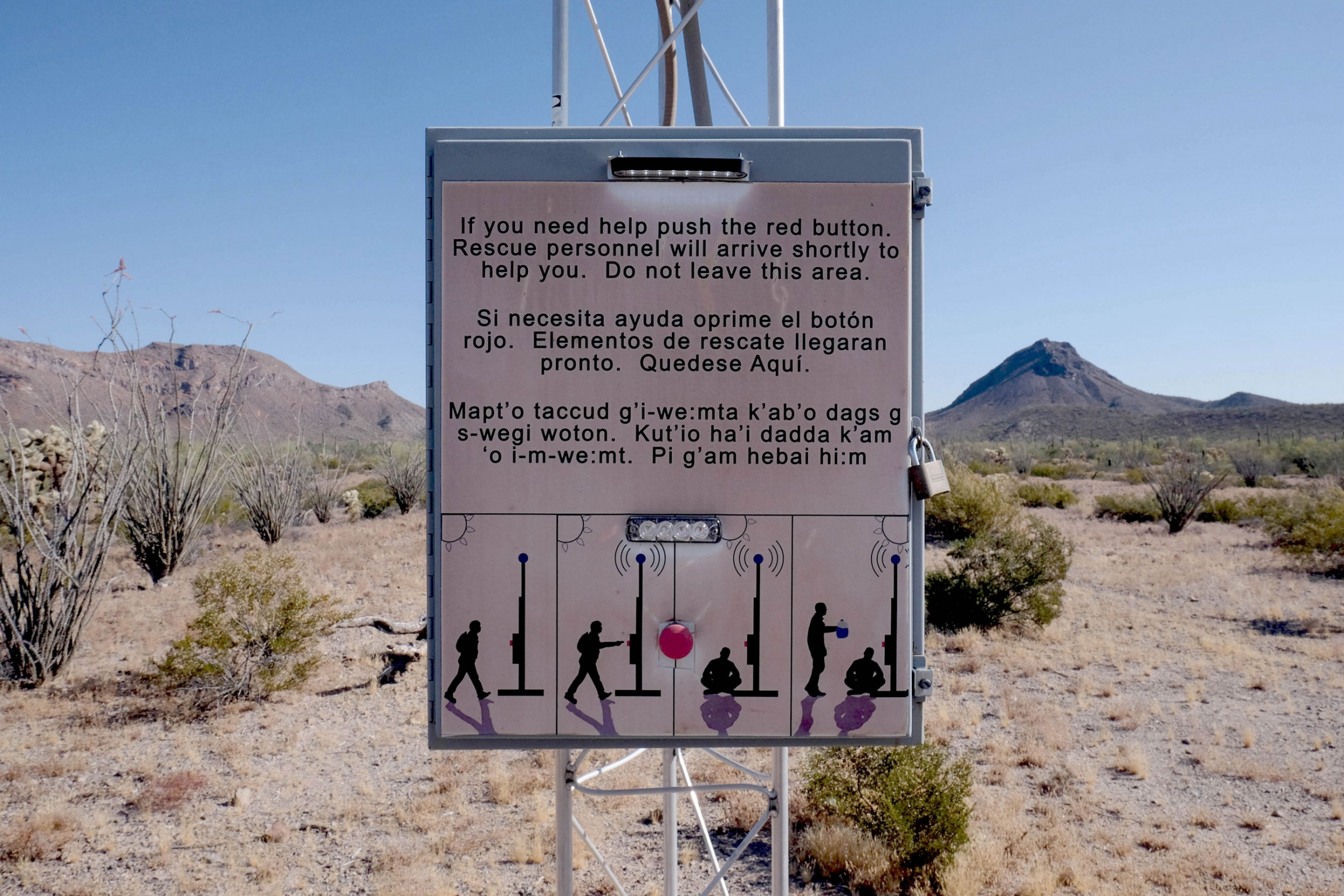 A sign in a wilderness area outside of Ajo, where volunteers often hike.

Orlowski says that humanitarian groups won’t stop leaving water in the desert, regardless of the outcome of the trial.

“Sadly, it’s because of Scott’s trial that we’re getting so many people coming out and saying we’re tired of this, we’re going to make a stand,” Orlowski says. “Now, with the aid office open, it is a place for people to gather, for people to get information and show that nobody’s hiding the work that we’re doing.”