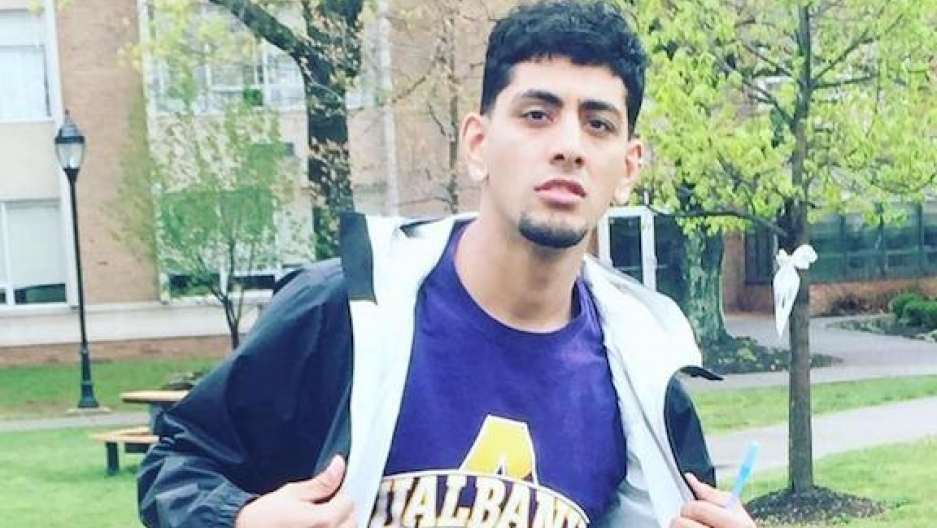 Former SUNY Albany student Omar Helalat has been held in ICE detention since March, 2018 even though the charges against him were dismissed. He also lost his DACA status.

In March of 2018, Omar Helalat was a college student at SUNY Albany preparing to earn his bachelor’s degree in business administration. He said he was bound for an internship in New York City.

"I was two months away from graduating," he recalled. "I was really excited."

But then he was arrested in his dorm after a fight with his ex-girlfriend. Helalat was accused of trying to strangle her. He denied the charges and expected his father would bail him out of the Albany County jail the next day. But Helalat was not released. As a Deferred Action for Childhood Arrival recipient, his arrest caught the attention of Immigration and Customs Enforcement, or ICE.

"They came and picked me up. They were threatening me, saying 'look, your DACA’s going to be revoked. You have no chance, you’re not staying in this country,'" Helalat said. "I was just like, 'I’ve been in this country for 16 years.'"

"They came and picked me up. They were threatening me, saying 'look, your DACA’s going to be revoked. You have no chance, you’re not staying in this country ...'"

It’s not clear why Helalat was transferred to ICE custody. Albany police did not return emails and phone calls seeking more information. Many municipalities, including New York City, have "sanctuary" policies that prohibit law enforcement from transferring immigrants to ICE without a warrant signed by a judge.

Fourteen months later, Helalat remains in custody at the ICE detention center in Batavia, outside Buffalo. The government is seeking to deport him — even though the charges against him were dismissed. The former girlfriend also wrote a note to an immigration judge on Helalat’s behalf saying she filed false charges because the relationship was "mutually toxic."

Helalat is in mandatory detention without the same rights afforded to other long-term immigrants because of quirks in immigration law related to DACA recipients.

DACA is the Obama-era program for young immigrants who were brought to the US illegally or who overstayed their visas. It allows them to work and go to school without being deported. President Donald Trump tried to end the program, but it’s still in effect for hundreds of thousands of people following numerous lawsuits.

More: Nearly 40 percent of DACA recipients are high school or college students. Now their future is in limbo.

Normally, a DACA recipient in trouble with the law might be held in detention until an immigration judge grants bond, based on whether they’re a risk of flight or a danger to the community. Last year, an immigration judge found Helalat should be eligible for bond. But he said he didn’t have jurisdiction because Helalat was in mandatory detention and could only be released by a federal judge.

Victoria Roeck, a legal fellow with the New York Civil Liberties Union, called this "an unusual application of the mandatory detention statute." Normally, she said people sent to mandatory detention are immigrants who arrive at the border without permission to enter.

"They have to be detained for the entire duration of their immigration removal proceedings and they cannot appear before an immigration judge to seek their release from detention on bond."

The New York Civil Liberties Union won a legal victory in 2017 for these "arriving aliens" at Batavia, the same detention center where Helalat is in custody. A federal judge ruled that they must be granted bond hearings. They were often held indefinitely during the Obama administration, but parole became much less common after Trump took office.

The 2017 ruling doesn’t help Helalat, however. He came to the US from Jordan with his parents and overstayed a visa. He eventually qualified for DACA.

But his status became more complicated a few years ago after he was allowed to visit an ailing relative in Jordan. Under immigration law, he was classified upon his return as an "arriving alien," just like those immigrants at the border. So when he got arrested last year, he was automatically subject to mandatory detention instead of being treated like other long-term residents who can see an immigration judge.

Helalat’s attorney, Matthew Borowski, calls it a "legal fiction" for the government to say Helalat doesn’t have the same rights under law as those other immigrants. This month, Borowski filed an emergency motion arguing Helalat's prolonged detention is unconstitutional. He said what happened to Helalat could happen to other DACA recipients who leave the country with government permission and then get arrested.

"It’s basically telling DACA recipients that you’re not on a level playing field when it comes to your rights in detention," he explained. "That the government can arbitrarily detain you and even if you are absolutely not a danger to the community and absolutely not a flight risk and you have never been convicted of any crimes… you don’t get a bond hearing. You just get to languish in detention until your case is concluded."

"It’s basically telling DACA recipients that you’re not on a level playing field when it comes to your rights in detention."

Another immigrant was held in ICE custody in New Jersey for more than a year, as reported by WNYC, partly because he also left the country while he had DACA.

Helalat lost his DACA status over the criminal charges. Borowski tried to challenge that on the grounds that the charges were dismissed. But the government wrote back saying ICE considers Helalat a public safety risk and that it’s still seeking to deport him.

Publicly, ICE maintains Helalat was taken into custody on domestic violence and assault charges and "will remain in ICE custody pending removal proceedings."

At about $200 dollars a night, the government has spent close to $85,000 keeping Helalat at the Batavia detention center for immigrants. He said he’s treated well because it’s minimum security with dormitory sleeping arrangements instead of cells. But visits with his family are conducted through a glass window.

Helalat said he’s been gathering with other Muslims in the detention center to break their daily fasts during Ramadan this month.

With the government seeking to deport him, Helalat’s only avenue to remain in the country is to seek asylum. He lost his case last year before the immigration court system, but his lawyer is now appealing to a federal circuit court. Helalat worries he couldn’t function in Jordan’s more restrictive society. He barely speaks Arabic and can’t read the language, either.

"I’ve spoken in English my whole life," he explained. "I write in English, I read English. It’s my language."

He was also planning to get a green card before his arrest. His father is a US citizen and sponsored him, but the waiting list could be several years.

In Albany, SUNY students have rallied to Helalat’s defense. He’s now hoping a federal judge will release him on bond so he can continue fighting for asylum while free, and not behind bars. He urges other DACA recipients to continue advocating for their rights, but said they should also be careful and avoid any legal problems.

"Me growing up, I didn’t understand," he said. "I didn’t ever think that I would be in the situation that I’m in because I’m a DACA recipient."

A version of this story originally aired on WNYC.