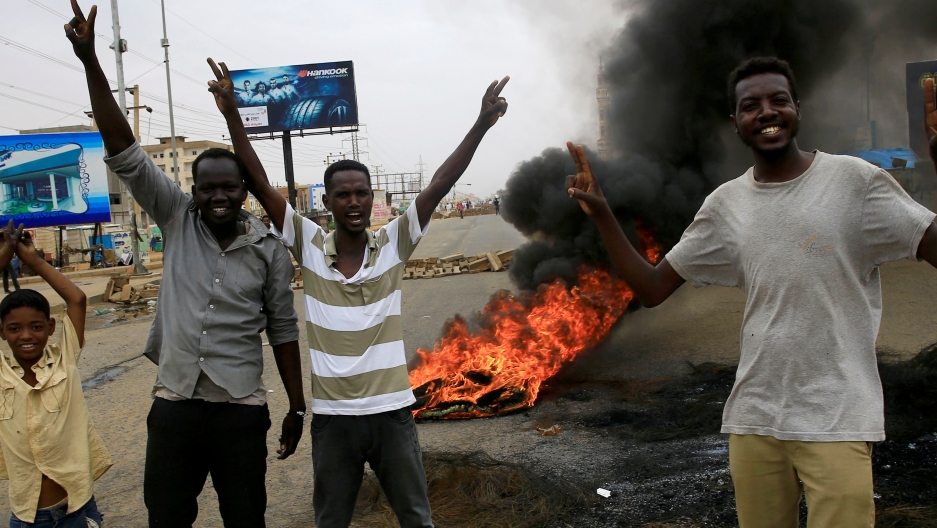 Sudanese protesters gesture near burning tires used to erect a barricade on a street, demanding that the country's Transitional Military Council handover power to civilians, in Khartoum, Sudan, June 4, 2019.

Sudan's military rulers offered to resume talks with opposition groups on Wednesday, two days after security forces mounted a deadly raid on a protest camp, but the opposition rejected the invitation.

Medics linked to the opposition said the death toll from Monday's operation and subsequent unrest had risen to 101 and that it was expected to increase further. No official casualty figures have been released.

The raid, which followed weeks of wrangling between the ruling military council and opposition groups over who should lead Sudan's transition to democracy, marked the worst outbreak of violence since the army ousted President Omar al-Bashir in April after months of protests against his rule.

Mobile internet and cellular access have been difficult, if not impossible, to come by. Reporter Jason Patinkin, who lives in Khartoum, says that Wi-Fi is also rare, and that “effectively, the shutdown of the internet, for most Sudanese, has been pretty complete." Patinkin spoke with The World's Marco Werman about the recent violence.

Marco Werman: What's the scene on the streets of the Sudanese capital? What have you seen?

Jason Patinkin: We went out for a drive [Tuesday] to do some reporting. [Monday], which is when all the violence happened, no foreign journalists were allowed out of their hotels, so we were cooped up inside, unable to report on anything firsthand. This morning we ventured out and basically, the streets were mostly deserted. We drove and there is a large presence of the Rapid Support Forces, which is a Darfuri militia accused of many atrocities, including the violence of [Monday] to break up the Senate.

In particular though, of note, we drove through one neighborhood called Burri. Burri has been sort of the epicenter of the revolution, especially before the sit-in [protest]. So from December until April, when there were all sorts of street protests — most of that was in Burri. They were very much hardcore revolutionaries there. Every street in Burri is blocked. There are roadblocks everywhere and these are civilian roadblocks. These are just the regular people that had set up piles of rocks, trees, logs, burning tires — just everywhere. To go from A to B is a very difficult maze because it's just roadblocks all over the place. They are showing their displeasure by basically shutting down their neighborhood.

The military government has tried to shut down the internet in the past. Has there been any attempt to constrict information or shut down the net right now?

Yeah, I'm on Wi-Fi now, but there is no mobile internet. Unless you're connected to a Wi-Fi network, you cannot get it through the cell networks which has made communication very, very difficult, particularly for most Sudanese who don't have access to Wi-Fi and rely on cell networks for their internet access. That has limited the spread of videos and photos on WhatsApp and on Twitter, Facebook, etc.

"If I could sum up the message that they had about the future, it was that the revolution has just begun."

We had a difficult time trying to reach protesters precisely because the internet's been shut down. I'm just curious, how has that affected the momentum of the protesters?

Well, that's something that we'll have to see in the coming days. I talked to plenty of protesters [Tuesday], many of whom were shot or beaten during the attacks [Monday]. If I could sum up the message that they had about the future, it was that the revolution has just begun.

Jason, you talked about the people who are protesting. Is there one person who stood out for you, who has spoken to you about what they see the stakes are?

I actually talked with one person who was going to go overseas. He was actually going to Qatar, not to Europe, but he said he put those plans on hold when the revolution started because he thought, "Well, maybe this is an opportunity for me to grow in my own country." So that's just the youth, but both men and women who are young are looking for better opportunities. But I think everyone has been stifled for 30 years and really struggled under the previous regime. So the stakes are quite high, because now people are seeing the current military regime doing similar things [as] the previous military regime, and the whole point of their revolution is to get rid of the military regime.

You mentioned the attack by the security forces undertaken by this group known as the Rapid Support Forces. They've been loyal to the now-deposed President Omar al-Bashir. Who are these forces exactly and are they simply an extension of the ex-president? How directly do they take orders from the current military regime?

They have their roots in the Janjaweed, which many listeners have probably heard of. They're the notorious militia that allegedly committed genocide in Darfur in around 2003, 2004. Basically, the Janjaweed were reorganized into various militias and the most prominent of those is now called the Rapid Support Forces. They're led by a commander named Mohamed Hamdan Dagalo, but his nickname is Hemeti. Hemeti was basically Omar al-Bashir's pick to receive all sorts of money, all sorts of equipment, weapons, etc., to do the regime's dirty work. And Hemeti was very glad to do this. He became extremely powerful. He has troops in Yemen fighting for the Saudis and he's paid a lot of money for that. And he has troops all over the country. He has gold mining operations. And the Rapid Support Forces take the orders from him. He was beholden to Bashir in the sense that he was receiving all sorts of money from Bashir, but Bashir essentially went broke.

What seems to be clear is that [General Abdel Fattah al-Burhan] and Hemeti are working together and that the RSF is the most powerful armed group in Khartoum.

"So it literally is, either the military has its way or the civilians have their way, and in the current situation, the military is getting its way because it has all the guns."

It sounds like a real dilemma for the demonstrators. You said the demonstrators are determined not to take up arms, but a spokesman for the Sudanese Professionals Association, which has been the driving force behind the street protests, said the military council has chosen escalation and confrontation. Jason, what did he mean?

The way they've said they can escalate things is through civil disobedience, which basically means not going to work, barricading roads, maybe going to work, but not working and just sitting there instead. For example, the airport was closed [Monday]. No flights came in because a number of pilots and airport workers refused to work in protest of what happened [on Monday]. [Last week] there was a strike which was quite successful where nobody worked for two days. So if the protest was going to escalate, I think it will take the form of barricades, roadblocks.

Related: How Sudan's uprising is inspiring a generation of Sudanese American teens

The Sudanese Professionals Association is an interesting organization. I would not characterize them as the driving force behind this movement. They had assumed a leadership role and they have legitimacy because of the popular support they have from the protesters. But that is changing. And I think that has changed especially over the last month. The negotiations clearly have not been in the favor of the pro-democracy movement, with violence continuing and protesters dying at the barricades. There is one person who told me something along the lines of — one guy who is wounded, he was really beaten — and he said something to the effect of, "We're out there on the barricades, in the streets. Our friends are dying, getting shot at. And they're sitting in the negotiation room wasting time." I think the leaders, the people who have assumed leadership of this revolution, are losing their popularity on the street. [But] not entirely. They still helped get the revolution this far, which is something that no one in the last 30 years has ever done.

You mentioned the power and hope of young protesters a number of times. Have you heard anything about how they're moving forward, what they're planning next?

That's something we asked a lot of people and the general answer is civil disobedience, which is quite vague. But again it means barricading roads, work stoppages, that sort of thing. Basically trying to bring the country to a halt and trying to show the military that they are not accepted as legitimate by the people. But nobody who I've talked to has said they're giving up. But I should say that most of the people I talked to were people who were wounded or who are in Burri. So these are really the hardcore of the revolution. I think a question will be whether the people who have supported the revolution, but haven't necessarily been on the barricades and haven't necessarily slept at the sit-in for one or two months straight — the question is whether those people who have been very supportive of the revolution will continue to support it despite the events of the last couple days.

Editor's note: An earlier version of this story misspelled the area of Burri. This interview has been condensed and edited for clarity. Reuters contributed to this report.