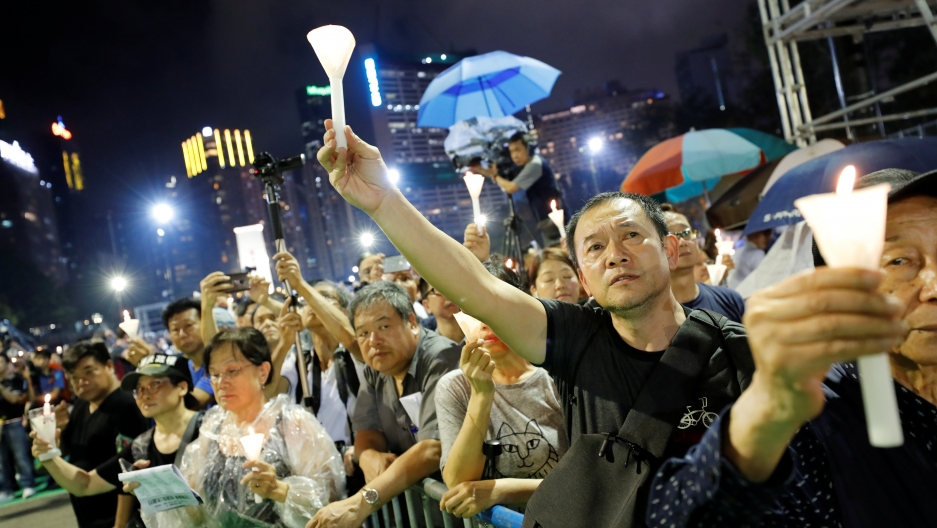 Thousands of people take part in a candlelight vigil to mark the 30th anniversary of the crackdown of pro-democracy movement at Beijing's Tiananmen Square in 1989, at Victoria Park in Hong Kong.

“We will fight together, advance and retreat together,” concluded Qiu Zhanxuan in a video his comrades released on May 4, 2019. Qiu was the former leader of a Marxist student association at the prestigious Peking University. He had prepared the digital testament to be released in case he disappeared.

Qiu did disappear in late April after he’d dared to call for a united front between students and workers, 30 years after the infamous Tiananmen Square crackdown. He had previously been arrested and then released in December 2018 on his way to a memorial marking Mao Zedong’s 125th birthday.

This came after students from Peking united with striking workers at the company Jasic Technology, whose attempts to form a union were blocked in July 2018. Students from Peking University, but also Renmin and Tsinghua universities, traveled to the south of China the following month to support the aggrieved workers. They were arrested, some released, and others, such as Qiu, have since disappeared.

#China: More than 40 activists including #students have been detained since July 2018 for mobilising against the arrests of workers at #Jasic Technology in Shenzhen who were trying to form a union. See this @CIVICUSalliance interview with SACOM on the case https://t.co/b9mHJNlUjz pic.twitter.com/5JpZ4755Mw

It was students based in Peking who began protesting in April 1989 after the sudden death of Hu Yaobang, the reform-minded former Communist Party of China secretary-general. They called for political reform and democracy, but also for more social freedom and equality. Progressively, workers joined the movement all across China. Initially, they weren’t welcomed by the students, who feared their movement would be diluted, but they soon realized that all Chinese citizens were fighting for the same cause: the realization of the socialist ideal in the form of a more democratic and equal society.

The students’ peaceful hunger strike in Tiananmen Square ended on June 3 and 4 when more than 200,000 troops were sent in to suppress what the communist regime saw as a counter-revolutionary riot. It’s estimated anywhere between hundreds and thousands of protesters were killed.

Today again, the same issues are at stake, that of equality and justice in a society which hasn’t achieved the socialist dream, but instead becomes a fierce capitalist market. With economic growth in China stagnating and as President Xi Jinping’s promise of a “China Dream” becomes more distant for many of the 300m Chinese workers, student agitation could jeopardize the regime’s stability.

Long gone are the days of the “iron rice bowl” — the guarantee of a stable job for life with the assorted social benefits. The Chinese proletariat is no more the elite of communism but the prime victim of Chinese-style capitalism and fierce globalization. Chinese workers are in a worse situation than they were in 1989. They have fewer state protections, and the fate of many depends on their ability to accept and survive the often unregulated working conditions of the private sector.

As Han Dongfang, executive director of the Hong Kong-based China Labour Bulletin (CLB) observed, the situation is much more complex now than it was 30 years ago. The charismatic railway worker was only 26 when, on April 17, 1989, he gave a speech at Tiananmen Square to advocate the right of Chinese workers to freely organize. He helped create the Beijing Worker’s Autonomous Federation, the People’s Republic of China’s first independent trade union. It was dismantled soon after the June 4 crackdown in 1989. 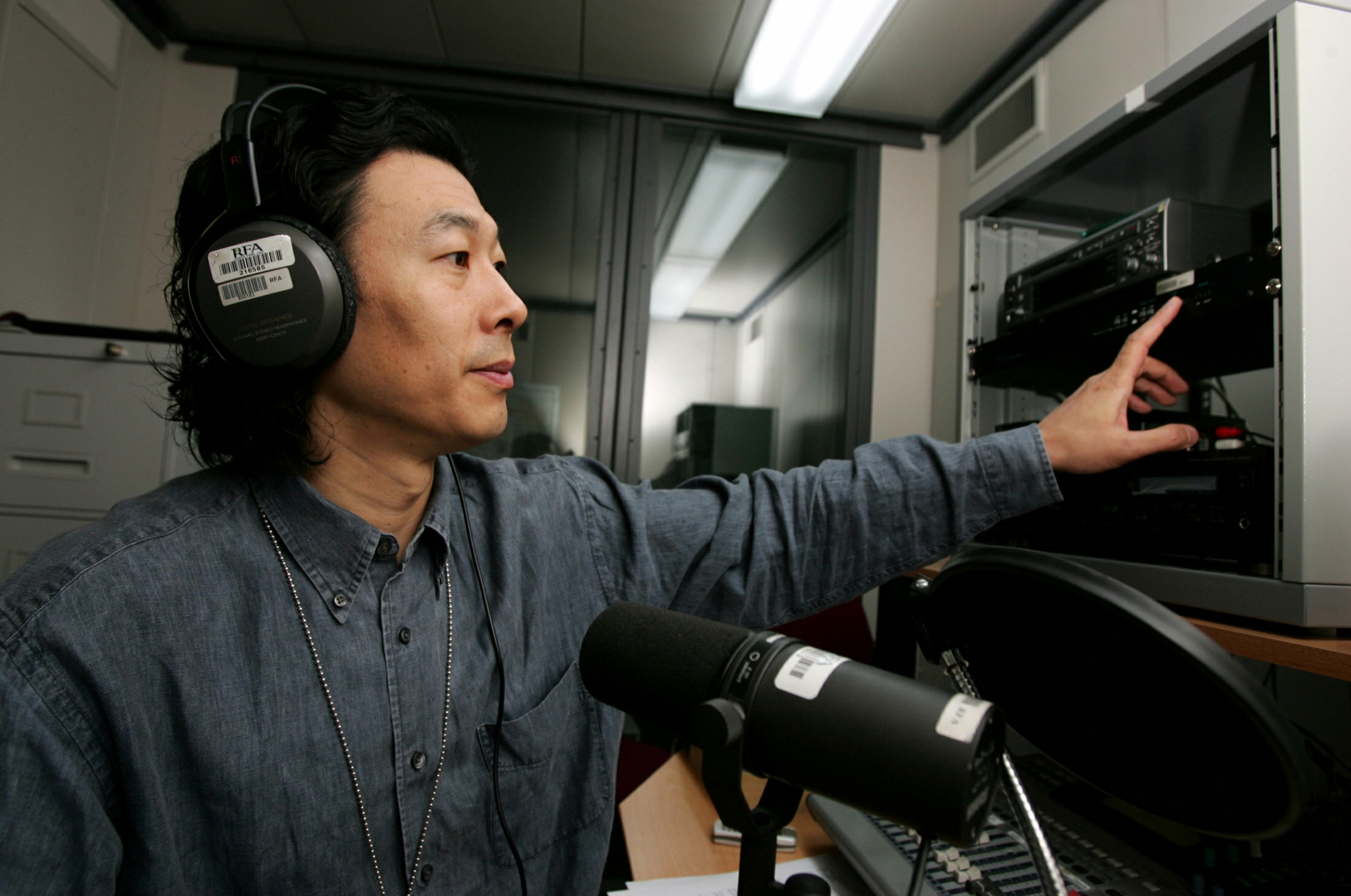 Chinese labour activist Han Dongfang speaks on a radio show at his studio in Hong Kong.

One of the most wanted Tiananmen protesters, Han turned himself into the police and spent two years in prison. Banned from China, he continues his fight from Hong Kong where he set up CLB in 1994.

There is still a lot to struggle for. There is no right to go on strike and no right to unionize in China today — yet some workers still protest over issues such as unpaid wages, restructuring plans, health and safety or even gender equality. The CLB recorded 1,701 strikes in 2018. Chinese workers are very active despite the risks strikes entail — from being fired, to be being arrested, imprisoned or even disappeared.

Chinese labor law is actually well-designed to protect workers, as my research has documented. Chinese-style public-interest litigation as well as forms of collective negotiation — if not yet collective bargaining — have become widespread in China since legal reforms in the 1990s and early 2000s. But these laws only work if they are implemented and adjudicated independently, and the system remains unpredictable.

The past ten years have also brought massive disenchantment about a Chinese legal system that circumvents the rule of law. Too many murky practices remain commonplace, such as forced labor known as “reform through work” (laogai or laodong gaizao) or “re-education through work” (laojiao or laodong jiaoyang). Such practices are still used by the state and some private companies alike, both on Chinese territory but on flagship foreign investment projects abroad. Reports have detailed Chinese workers dispatched overseas forced to live in inhumane conditions deprived of their passports, going unpaid for months.

In the past, discontent was centered among construction workers. Many migrated from the countryside to the cities without a clear residence permit, or what’s known as hukou status, making them vulnerable to possible abuses. Now, discontent is spreading.

One recent movement, called “996,” made headlines as Chinese tech employees name and shame their employees about a culture of working from 9 a.m. to 9 p.m., six days a week. This has included denunciations by workers of the powerful Alibaba founder Jack Ma who advocates such a punishing working culture. Tech workers have also protested online about long hours via GitHub or in using memes, stickers and T-shirts.

While a lot has changed in China since 1989, much has remained the same. The state is present at every level of society, which has become extremely unequal. The leadership of the Communist Party of China remains unchallenged politically, and yet a form of civil society coexists with an authoritarian regime that represses individual democratic aspirations. In this context, some students and workers are trying to unite around the same hopes and aspirations as their predecessors in 1989 — for equality and justice.

Leïla Choukroune is a professor of international law and director of the university research and innovation theme in democratic citizenship at the University of Portsmouth.