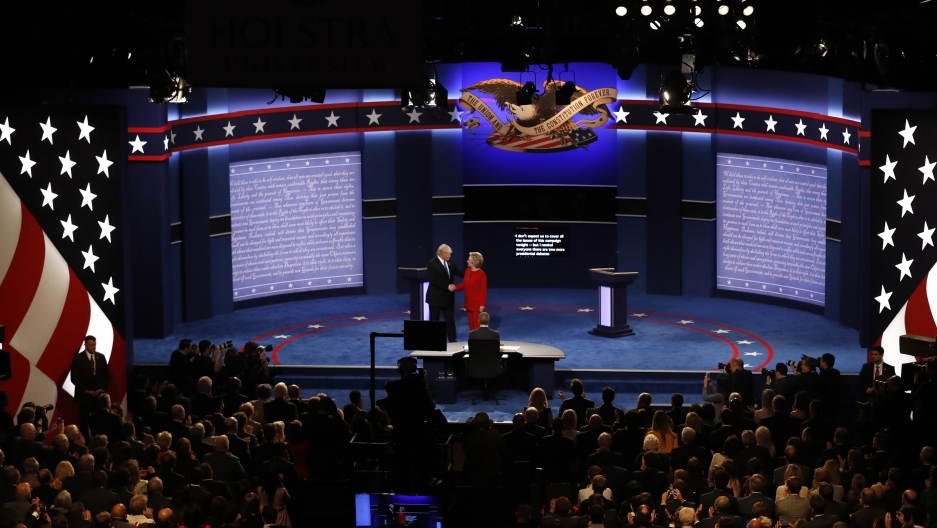 Then-candidates Hilary Clinton and Donald Trump shake hands before the start of the first presidential debate.

In the mid-twentieth century, Americans tended to be divided over important but mundane political issues, such as how big government should be or what kinds of social services it should provide. But there has been a significant shift and growing animosity in recent decades as voters have become less concerned with what government does and much more interested in politicians they believe represent who they are, according to Marc Hetherington, professor of political science at the University of North Carolina.

“The thing that’s interesting about this new divide — and it starts with race, and we end up with gender and sexual orientation and our stance that we take towards our adversaries — it’s not just about politics,” he said. The battle lines are drawn over the “things that are really, really important to people — the things that they feel in their guts as opposed to think about in their head,” he added.

The current partisan divide between Democrats and Republicans has its roots in the cultural upheaval of the 1960s, Hetherington said. Nowadays, political preferences are a reflection of voters’ values, their morals and whether they consider the world to be a safe or a dangerous place, as Hetherington lays out in his book “Prius or Pickup?: How the Answers to Four Simple Questions Explain America's Great Divide,” which he co-authored with Jonathan Weiler.

As our politics have become more personal, and the two sides have become increasingly estranged from each other, the consequences have not been pretty.

It seems unlikely that this deeply troubled relationship will improve in the run-up to the 2020 presidential election when you look at data from the Pew Research Center. It shows that polarization “reached record levels during Barack Obama’s presidency” and that voters became even more divided along partisan lines during President Donald Trump’s first year in office.

Lilliana Mason, the author of “Uncivil Agreement: How Politics Became Our Identity,” argues that Trump’s first presidential campaign was “rooted in identity and intergroup competition” and that his victory was the “culmination of a process by which the American electorate has become deeply socially divided along partisan lines.”

Furthermore, Mason, assistant professor of government and politics at the University of Maryland, believes Trump has used identity “to anger and divide the electorate.”

Related: Furious political rhetoric is as American as Thomas Jefferson

Ultimately, where political candidates of all stripes stand on policy issues in 2020, may not win them votes. “Americans are relatively moderate on a lot of issue positions. There’s not a whole lot of actual policy-based disagreement,” said Mason.

Neither she or Hetherington think that our political parties are likely to make peace anytime soon, and both are concerned about the health of American democracy.

“If history’s any guide, we’ll somehow emerge from this. Something will happen, but usually what happens is something catastrophic, some sort of cataclysm like a Great Depression or a Civil War,” Hetherington warned.

Or it could just come down to one side getting out way ahead of the other, he said. That possibility seems remote when you look at a recent analysis by the data journalism website FiveThirtyEight, which concludes that “we are living in the longest era of highly competitive elections since the Civil War.”

Political teamsmanship is here to stay it seems, at least for now.