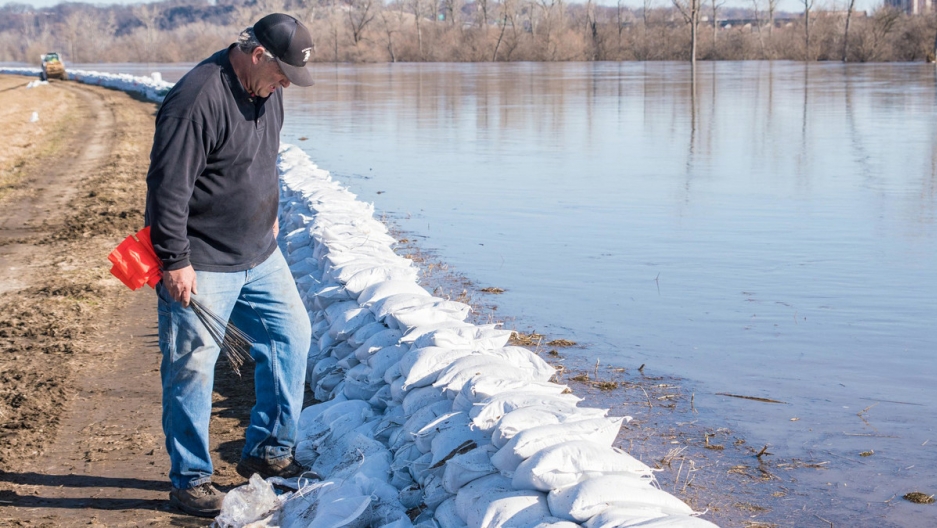 The rain and floods that have plagued the Midwest since March have wreaked havoc on agriculture. In Nebraska alone, farmers lost an estimated $440 million of cattle. They’re still recovering from the blizzard–flood combination, as well as the sand left behind once the waters subsided — up to 10 feet deep in some areas. The effects weren’t limited to the region: Washed-out infrastructure meant that feed wasn’t making it to California farmers, causing an increase in local feed prices. The rain has also put many farmers far behind their planting schedules, which could further affect the ag market and rural economies.

On the other side of the globe, northern Queensland’s seven-year drought was broken by welcome rain — which quickly turned into epic flooding. Rainfall in the region measured 50 inches in 10 days, and with high winds and low temperatures. Across the area, loss estimates have totaled nearly 700,000 cattle, 48,000 sheep, 10,000 kilometers of fence and 15,500 kilometers of private roads. The financial total is eventually expected to reach AUS$2 billion (about US$1.4 billion).

Patrick Hick, manager of Argyle Pastoral Company, a family-owned cattle station with 16,000 Brahman cattle on 600,000 acres in Julia Creek, Queensland, estimates the farm lost 6,000 head of cattle. “I’ve seen big floods before and big stock losses, but not to the extent of this,” he says.

These are both recent examples of “food shocks” — abrupt disruptions to food production. Food shocks can occur because of political unrest, policy change and mismanagement, but the biggest factor is extreme weather. As the effects of climate change intensify, extreme weather events like these will likely become more common and more intense, threatening food production around the world. If food shocks continue to increase in occurrence and severity, as a recent study predicts, then we should expect extended disruption along the entire food supply chain, which will affect everyone from big agricultural interests to subsistence farmers — as well as everyone who eats.

Food shocks are often seen in isolation, but they can have far-reaching results, says Richard Cottrell, a doctoral candidate at the Centre for Marine Socioecology at the University of Tasmania. Cottrell is the lead author of the new study, which examined the connections between terrestrial and aquatic food shocks. Using 53 years of data, Cottrell and his fellow researchers found that food shocks are occurring more often around the world. Drought is the principal trigger, but flooding is also a concern. 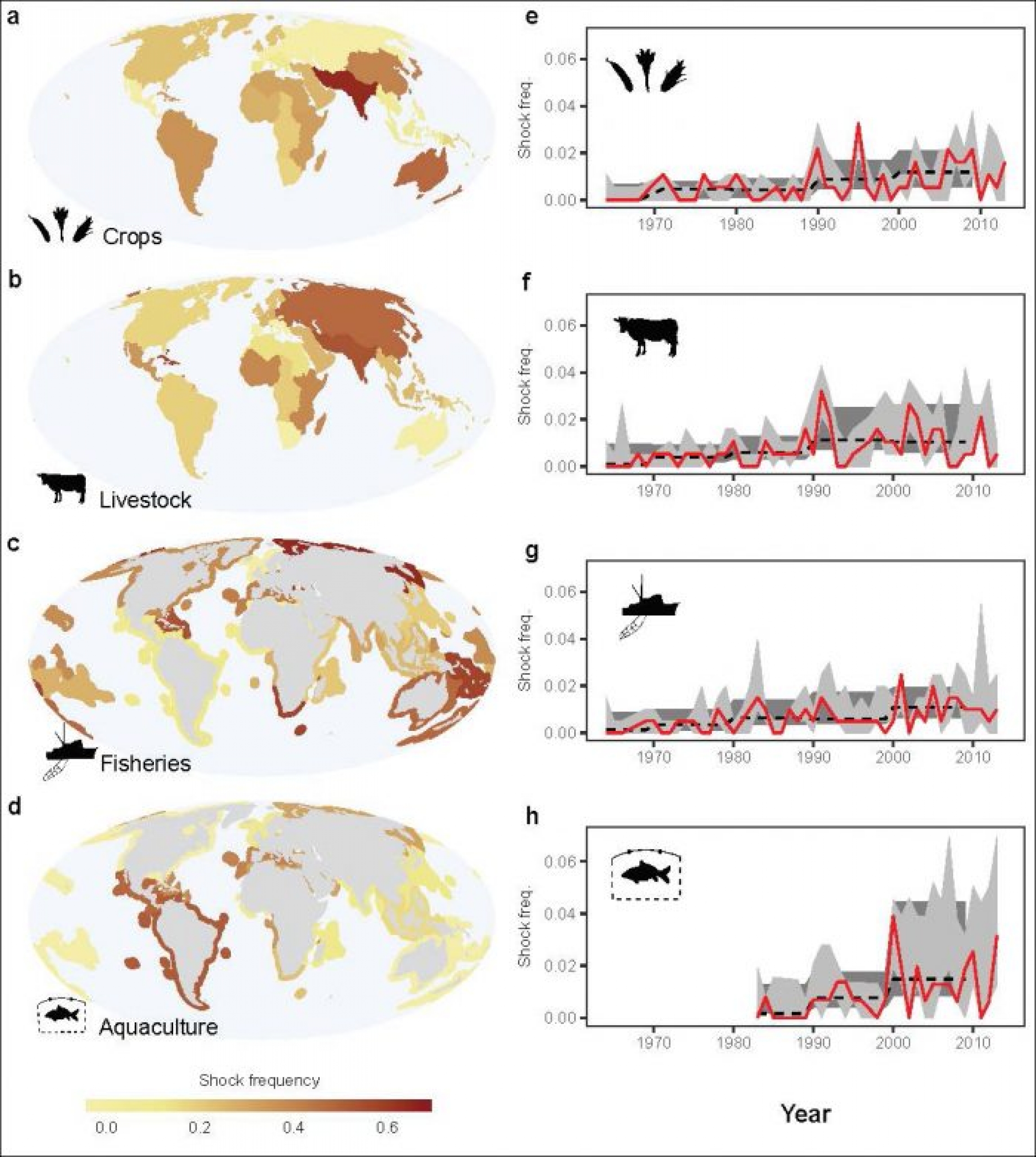 Trends in food production shocks across land and sea.

In the 1970s, increased tropical storms in the Caribbean seriously damaged farmland, which pushed local inhabitants to fishing. In Dominica, for example, Hurricane David wiped out the island’s bananas, its major crop, in 1979. The following year, there was a significant increase in the amount of fish caught, and three years later there was a local fish stock collapse. In Ecuador, floods in 1998 damaged farmland; by 2000, disease was affecting the country’s aquaculture shrimp farms. Although there is no solid connection between the two, the warming ocean has been linked to the virus that hit the shrimp farms. In West Africa, the local fishery collapse led to an increase in bushmeat hunting. Shocks to fish production are also increasing, particularly to aquaculture, according to a different study.

Queensland’s drought–flood combination is a clear example of a food shock, says Cottrell. And while we’ve always had these cycles, he is concerned about their frequency and cumulative impacts, which make recovery very difficult. “You get hit hard once and you get hit hard again, and areas that are suffering often get hit more frequently,” says Cottrell.

Climate change creating multiple and varied shocks at once

The American Meteorological Society recently released a study linking climate change and extreme weather events. Its findings are borne out by the increasing, and increasingly costly, weather and climate disasters in the U.S., according to the National Oceanic and Atmospheric Administration (NOAA). An average of 6.3 $1 billion-plus events occurred each year from 1980 to 2018. Between 2014 and 2018, that average rose to 12.6. In 2018 alone, extreme weather led to $91 billion in losses.

As our food supply has become more vulnerable, there is also the increased likelihood that multiple food shocks will happen at the same time, a scenario that has the potential to severely disrupt global trade systems, particularly if major food growing regions are hit. 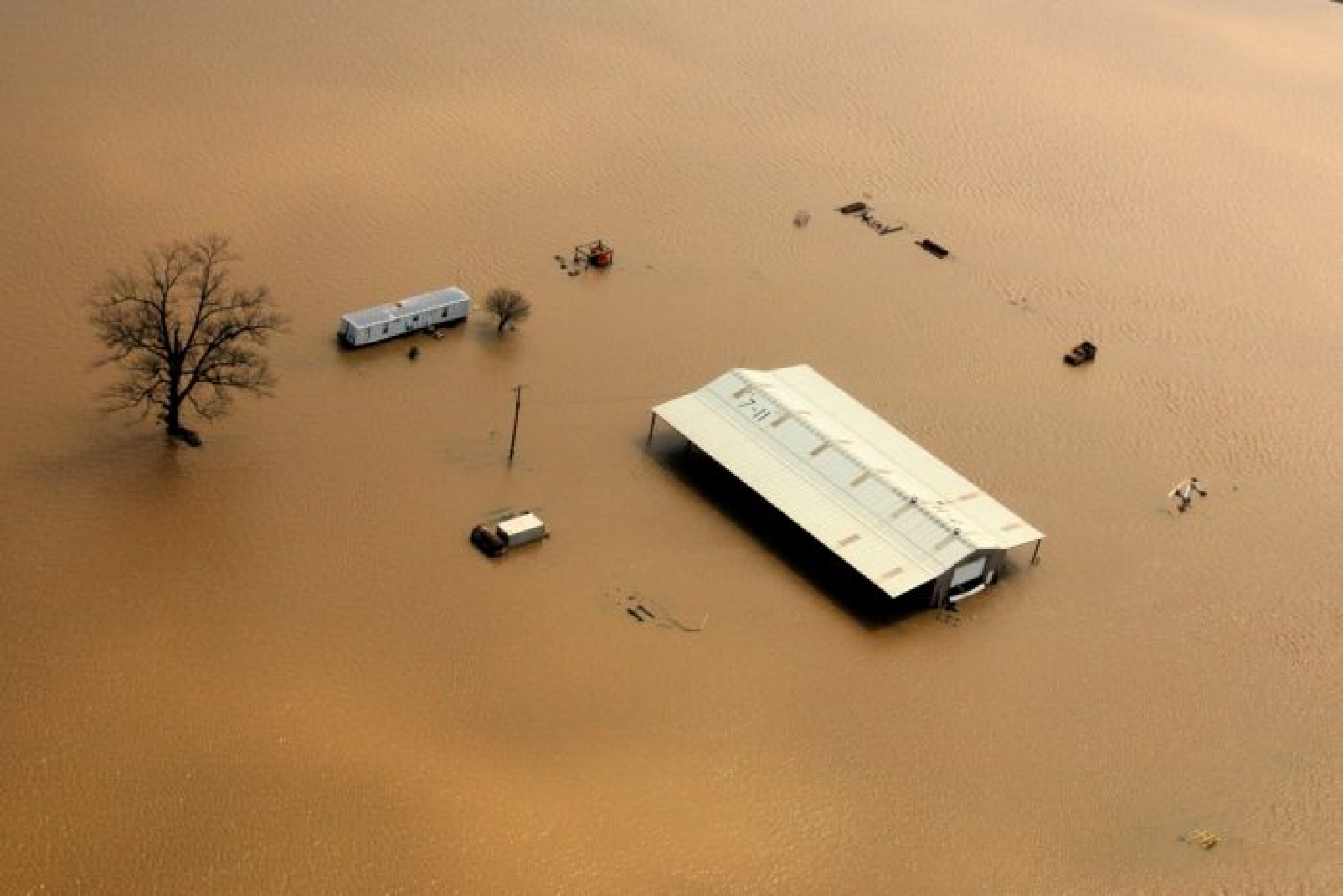 Conventional farming wisdom isn’t particularly helpful, says Renata Brillinger, executive director of the California Climate & Agriculture Network (CalCAN). “No amount of experience, even among the most veteran farmers, is providing much of a guidepost for some of these impacts,” she says.

Another problem is that different areas are experiencing different effects—one area might flood while, close by, another is in drought—making statewide responses difficult. California recently experienced a seven-year-long drought, devastating fires, and extreme heat. “Resources for farmers will have to be tailored to specific regions,” says Brillinger.

Bobcat Ranch, a 6,800-acre property in Winters, California, owned by the National Audubon Society, has been burned by wildfire every year for the past five years, says ranch manager Dash Weidhofer, who says 2018’s fire season was “unprecedented.” Fires have reached 70 percent of the ranch, which is just outside of Sacramento in the northern part of the state’s Central Valley. Last year’s County Fire burned almost 3,500 acres of the ranch.

Weidhofer is seeing a range of negative effects on the landscape. There are more grasses and less brush; there has been erosion into several streams that lead to a creek where salmon spawn; and the burnt sections have created a “blank slate” where the airborne seeds of less desirable plants have a chance to take over.

Like many ranchers, Weidhofer is inheriting a relatively modern situation. Most of California’s grasslands are now filled with non-native annual plants that grow quickly, die early in the season, and provide thick fuel for fires. He’s been working on preparing for coming fires by removing vegetation, creating paths that act as firebreaks and doing prescribed burns.

“A lot of the species here adapt to fire, but in the landscape’s history, it’s unlikely there was a significant wildfire every year,” he says.

The data on global food shocks are enormously underestimated, says Cottrell, for two reasons: A shock in one area might be mitigated by another region that is fairing better, especially in a wealthy economy that is more able to make up for the loss. In the US, for example, government assistance helps farmers regroup, and there are many food-producing regions and import agreements that can alleviate food production pressure.

The second reason getting an accurate count is a challenge is a lack of good data from illegal, unreported and unregulated fishing and overfishing and especially from developing and underdeveloped economies with many small-scale and backyard farmers, where production information is not captured in bigger food systems. Cottrell notes that that data need to be collected household by household, which is a resource-intensive undertaking.

“That might allow us to understand interactions between conventional, commercial food system, the small-scale food system, and also biodiversity,” he says, as wildlife is an important food source for some.

One recent study using household data showed the link between climate shocks and food shocks, and their likely effects on smallholder farmers in developing countries. The study included 5,300 household surveys from 15 countries. Seventy-one percent of households said they’ve had a climate shock, and 54 percent have faced food insecurity for a month or more every year — with some Ethiopian households facing six or more months of food insecurity. Those living in poverty, or on its edge, are the most likely to feel the brunt of shocks.

“If these huge events start happening every few years and you haven’t been able to accumulate the sorts of assets you need to get through those hard times, then your resiliency and your adaptive capacity is low,” says Cottrell.

Regenerative farming, rotational and mob grazing, reducing tillage, agroforestry, and soil improvements are all means to help mitigate the effects of extreme weather and the resulting food shocks. These techniques all help create resilience against climate change. Healthier soil, for example, recovers quicker from droughts and floods. Rotational grazing gives pasture areas the opportunity to recuperate while animals are feeding elsewhere, and agroforestry blends the benefits of carbon sequestration with shade cover for crops and animals and nitrogen enrichment.

Charles Alder, CEO of Rural Aid in Sunnybank Hills, Queensland, a nonprofit that supports farmers, has seen firsthand the devastation caused by flooding. In other areas of southern Queensland and in New South Wales that have experienced long-term drought, farmers are selling off their cattle, says Alder. Some of that stock is going to northwest Queensland to replenish stocks killed by the floods.

Related: Why food insecurity is a global farmworker issue

Australia needs to get better at capturing and storing water, and managing pasture and vegetation, says Alder, to make the landscape more resilient to drought and better provide farmers with water when they need it. “We’re not actually progressing the state of our agricultural land very well, and that’s a challenge for us,” he says.

It’s not that farmers don’t want to make changes to adapt, but they lack the resources, particularly human labor. Attracting and paying workers is tough for farmers, particularly in times of drought. They end up doing most of the work themselves. “They’re just exhausted,” Alder says.

A similar scenario is playing out in California. Ranchers are barely making ends meet as it is, says Bobcat Ranch’s Weidhofer. Creating a shock-resilient farm or ranch takes money. For example, the sturdy, cattle-proof fencing needed to build smaller pastures for rotational grazing is expensive and labor-intensive.

Farmers and ranchers may get more support through policy such as California’s AB 409, which aims to provide $2 million in grants to the state’s agriculture industry to fund climate change tools and training. The bill has solid support from government and industry, says CalCAN’s Brillinger.

While California heads into summer and prepares for another fire season, almost 60 percent of Queensland is back in drought. Argyle’s Hick says if the drought-flood cycle speeds up, that could mean a quicker sales cycle, and they’ll have to completely change how they run their operation. And they’re crossing their fingers they get a break from extreme weather events in the immediate future.

“If it happened again in the next two or three years, it would send us broke,” says Hick.