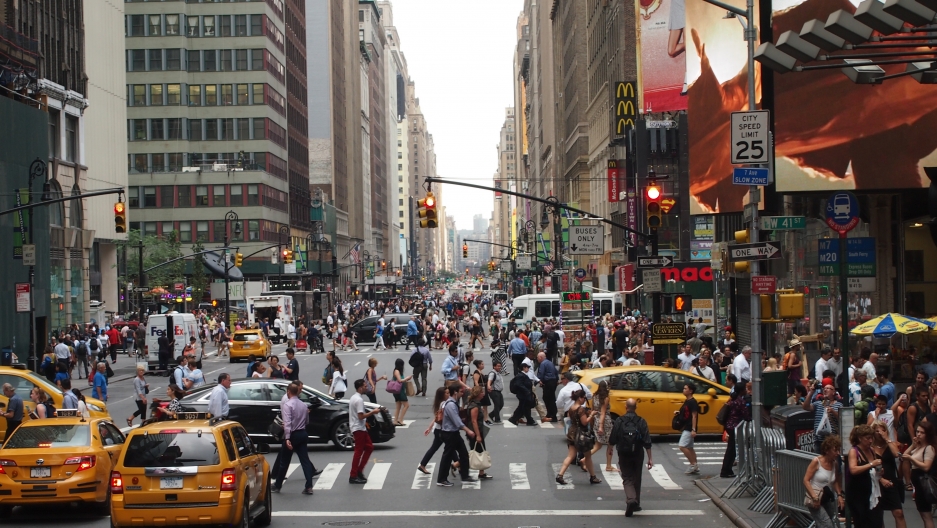 New York City's famously congested streets may get a welcome break from vehicle traffic starting in 2021.

Beginning in 2021, getting around Manhattan should become a little easier: New York City has passed a new congestion pricing scheme that will charge fees to people who bring vehicles to Midtown and Lower Manhattan during peak business hours and then use that money to fund public transit.

New York will be the first city in the US to implement such a plan. London, Stockholm and Singapore have already done so.

Related: Sweden has an ambitious effort to cut out its carbon use

“[T]he automobile has been permitted to dominate not just travel and transportation, but streets and public space and the very life of great cities."

“[T]he automobile has been permitted to dominate not just travel and transportation, but streets and public space and the very life of great cities,” Komanoff says. “The advent of congestion pricing for New York City is going to represent the first time anywhere in America that is going to tax or charge or put a considerable price on an 'environmental harm.' Here, the environmental harm … is not tailpipe emissions. It’s not carbon emissions. It is the physical presence of the car itself that contributes to traffic congestion, that slows down other drivers as well as buses, pedestrians and bicyclists, etc..”

Related: Why Luxembourg's free transit may not fix its traffic problem

Taxing or charging an environmental harm has been a tough sell in the United States, especially with carbon emissions, Komanoff notes. He hopes New York City’s congestion pricing will “blaze a path … that will spill over sometime down the road for carbon pricing.”

About $1 billion in revenue will come from cars and trucks that will be charged when they cross into Manhattan's central business district, which begins around 60th Street. The other half a billion or so will come from charging yellow taxis, Ubers and Lyfts for trips within the same district — although their payment range extends a bit further north to 96th Street.

The revenue will be enough to bond $20 to $25 billion in mass transit investment, most of which Komanoff hopes will be allocated to modernizing the signal system in the subways so more trains per hour can run on existing subway lines and make subway travel more reliable.

Drivers who cross into Manhattan via the Lincoln and Holland tunnels, which run from New Jersey under the Hudson River into the southern and central parts of Manhattan, will likely not be charged an additional fee under the new congestion pricing plan because they already pay a hefty toll, Komanoff says. But drivers who enter northern Manhattan from the George Washington Bridge, continue south, and cross 60th Street will be charged the same as any other driver who crosses 60th Street. Drivers who cross into Manhattan from Long Island, Queens and Brooklyn on any of the four East River bridges that are currently free will also pay a fee.

The fee will likely be between $11 and $14, according to the New York Times. And while Komanoff acknowledges that is a hefty fee, he believes most people will benefit from it. The idea, he says, is to set the congestion charge at a level that will reduce the number of vehicle trips into the city by about 15%. If it works, this will shorten drivers’ commuting times and improve transit alternatives, which will become more frequent, more comfortable and faster.

“I'm not going to say that everybody is going to come out ahead of the game, but some drivers will,” Komanoff says. “And the vast majority of trips into the central business district that are done by train and bus are going to be more humane, more efficient, more reliable, and more people are going to want to do them."

Komanoff also predicts more people will bike and walk within Manhattan, “which means they'll be healthier, the air will be cleaner, people will live longer, fewer visits to the ER for asthma and heart attacks, fewer people being killed and injured by cars, less carbon being spewed into the air. … The net benefits, even after you deduct the new tolls that people are going to be paying, come out to about $3.5 to $4 billion a year.”

Komanoff believes that people with disabilities should get some sort of exemption from the congestion charge. The legislation requires that a six-person panel figure out a way to discount their tolls. He disagrees, however, with the idea of giving drivers of electric vehicles the same break.

“We need to hold the line and have EVs pay the same congestion charge,” he insists. “Because the main harm, or 'social externality cost,' of driving in the crowded, teeming heart of New York City isn't what comes out or doesn't come out of the tailpipe. It's the physical presence of that vehicle that slows everybody else down.”

After nearly a century during which cities, most of which were never designed with automobiles in mind, were “taken over” by cars, congestion pricing “really does begin to level the playing field,” Komanoff says.

It signals a new era where cars don't come first.

“It not only charges drivers for the congestion that they impose on everybody else and on each other, but it signals, I think, a new era where cars don't come first,” he maintains. “They are part of a transportation ecosystem. They are not the only part of it. They have to be consigned to [a role] that doesn't dominate. That's going to open the door to different ways of living in New York and other great cities that we can only dream about now.”