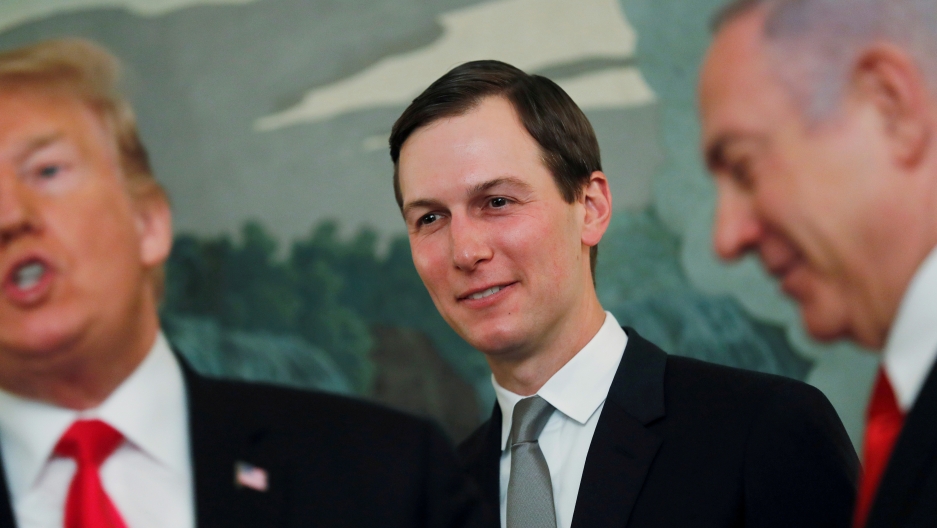 Three important players in US President Donald Trump's long-delayed Middle East peace plan met in Jerusalem on Thursday, but gave no hint about whether its political component would be further postponed by tumultuous events in Israel.

Trump's adviser Jared Kushner and US Middle East envoy Jason Greenblatt met with Israeli Prime Minister Benjamin Netanyahu during a visit to the region to drum up support for an economic conference in Bahrain next month.

The Trump administration has said it expects to use that meeting to unveil the economic stage of his proposal, which he has dubbed the "deal of the century."

Related: What Israel's new election reveals about the struggle over Jewishness

"[It] remains scheduled for ‪June 25-26," an administration official said in Washington on Thursday, adding that the political plan would be released "when the timing is right."

Kushner and Greenblatt arrived just as Israel found itself heading for a snap national election on Sept. 17, after Netanyahu failed to put together a governing coalition and lawmakers voted to dissolve Parliament on Thursday.

Netanyahu sought to play down the setback, referring only to "a little event last night" during brief joint remarks with Kushner. "That's not going to stop us — we're going to keep working together," he said.

"I'm tremendously encouraged by how the United States, under President Trump, is working to bring allies together in this region against common challenges, but also to seize common opportunities."

Kushner also made no direct mention of the plan, saying Israel's security was critical to Washington and they were "very excited about the potential that lies ahead for Israel, for the relationship."

The plan's rollout was first expected in late 2018 or early 2019, but was postponed to give Netanyahu time to hold the election that took place in April and led to Thursday's inconclusive outcome. It is unclear if it will be postponed again until after the September ballot.

The Bahrain conference aims to encourage investment in the Palestinian territories by Arab countries, before grappling with the difficult political issues at the heart of the conflict.

Israelis and Palestinians were quick to point out the potential disruption of a new election.

In Israel's liberal daily Haaretz, under the headline "Kushner's Awful Timing," analyst Amir Tibon wrote that with another election campaign pending, "the Gulf workshop is no longer on top of anyone's agenda."

The Palestinians' chief negotiator Saeb Erekat joked that the Trump plan, which they believe will be heavily weighted in Israel's favor, was now "the deal of the next century."

The Palestinian leadership has refused to deal with the Trump administration since the president recognized Jerusalem as Israel's capital.

"The American timetable is usually constructed on the basis of the Israeli schedule or the Israeli agenda," said Hanan Ashrawi, of the Palestine Liberation Organisation.

"They are buying time for Israel, [while] on the other hand they are actually preventing any serious political initiative to deal with the issues."