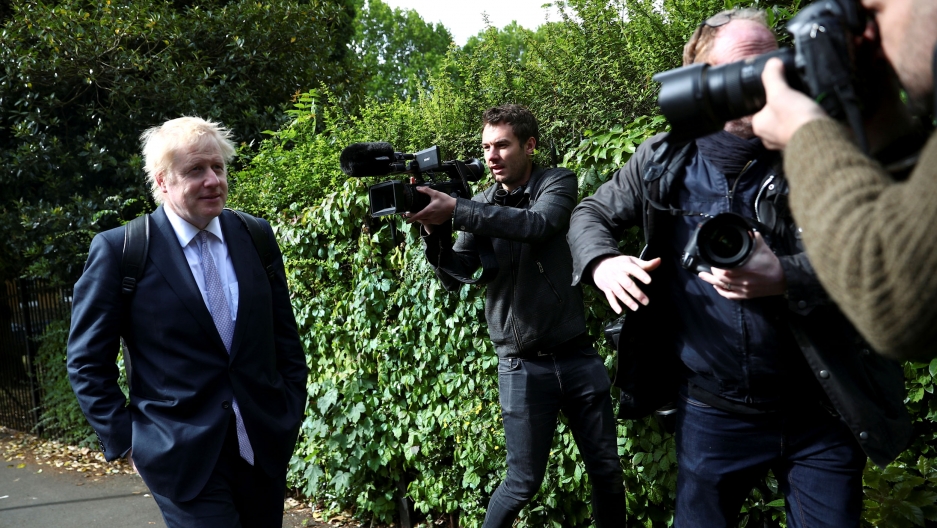 Former British Foreign Secretary Boris Johnson, who is running to succeed Theresa May as Prime Minister, leaves his home in London, Britain, May 28, 2019.

Former British Foreign Secretary Boris Johnson, who is the favorite to succeed Theresa May as Prime Minister, must appear in court over allegations he lied about Brexit by stating Britain would be 350 million pounds ($442 million) a week better off outside the EU, a judge ruled on Wednesday.

The figure, famously emblazoned on a campaign bus, was a central and controversial part of the Leave campaign's "take back control" message ahead of the 2016 Brexit referendum.

Opponents argued that it was deliberately misleading and it became symbolic of the divisions caused by the referendum, which saw Britons vote by 52%-48% to leave the European Union.

District Judge Margot Coleman ruled that Johnson, a former British foreign secretary and ex-mayor of London, must answer a private summons alleging he had committed three offenses of misconduct in a public office.

In her written ruling at London's Westminster Magistrates' Court, Coleman said the allegations were not proven and she had made no finding of fact.

"Having considered all the relevant factors I am satisfied that this is a proper case to issue the summons as requested for the three offences as drafted," Coleman said.

"This means the proposed defendant will be required to attend this court for a preliminary hearing, and the case will then be sent to the Crown Court for trial."

Johnson's spokesman was not immediately available for comment, but his lawyers had argued the case was no more than a political stunt by those opposed to Brexit.

Polls suggest that the flamboyant politician, known for his tousled blond hair, is well ahead of the other 10 declared candidates in the contest to replace May as leader of Conservative Party and prime minister.

He was one of the leading supporters of Brexit during the 2016 vote and quit the government over May's EU divorce deal which parliament rejected three times, leading her to announce she would step down as party leader on June 7.

According to the summons, a crowdfunded private prosecution brought by a group called "Brexit Justice," Johnson deliberately made false comments about the cost of Britain's EU membership before the referendum and the 2017 national election.

In submissions to the court, Johnson's lawyers said the case was brought for purely political purposes.

"Brexit Justice Limited is the product of a campaign to undermine the result of the Brexit referendum, and/or to prevent its consequences," his lawyer argued.

In September 2017, government statisticians criticized Johnson for repeating the 350 million pound figure which he argued could be spent on public services in Britain, saying it ignored the rebate that Britain received from the EU.

"It is a clear misuse of official statistics," David Norgrove, chairman of the UK Statistics Authority, then wrote in a letter to Johnson.

Figures published by the Office for National Statistics in April 2016 showed Britain's weekly net contribution to the EU to be about 190 million pounds (about $240 million) a week.