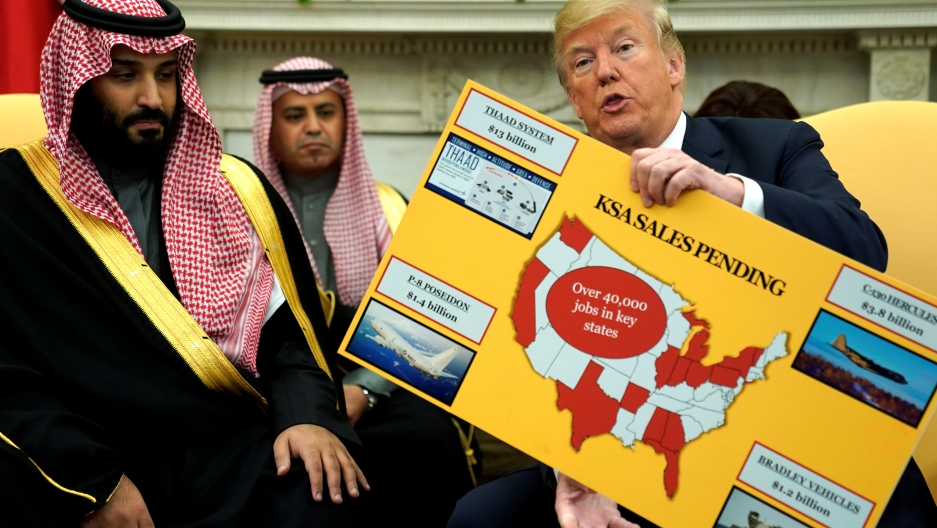 Saudi Arabia, the United Arab Emirates and Jordan will pay $8 billion for American-made bombs, rockets, missiles and electronic warfare equipment — and the American personnel who can operate it.

US Congress had blocked the sale of these weapons systems and services ostensibly because they have killed civilians in Yemen. By invoking a national emergency over tensions with Iran, President Donald Trump has used a legal loophole in the Arms Export Control Act, which regulates transfers of deadly weapons to foreign countries.

“The override allows the president to push through arms sales that have either been on hold in Congress — or have not even been given to Congress yet for their approval — and allow those to go forward without any congressional oversight,” says Rachel Stohl of The Stimson Center, a Washington, DC, think tank. “And it's particularly troubling because we're talking about weapons to countries that have been involved in a serious humanitarian catastrophe in Yemen.”

Related: With veto, did Trump 'greenlight a failed strategy' in Yemen?

Secretary of State Mike Pompeo cited "Iranian aggression" as the reason for the sale, but the battleground where these weapons are currently being used is Yemen. Jordan, one of the countries named as a customer, has not played a significant role in the war in Yemen.

“Place has been turned into a lake of blood'' due 2 Saudi coalition fighter jets #Airstrikes_Bomb_Yemen_Funeral pic.twitter.com/9AaVbxoppT

The air campaign to defeat Yemen’s rebels, led by Saudi Arabia and the UAE, is responsible for most of the documented civilian casualties in the Yemen war, according to the United Nations. Despite efforts by the US to improve their aim, Saudi and Emirati pilots — flying US-made planes and dropping US-made munitions — have killed thousands of Yemeni civilians at hospitals, schools, weddings and funerals. Last year, an airstrike hit school bus full of students.

“Those are the weapons that have been at the heart of the most significant congressional opposition because the Saudis have proven that they use so-called 'offensive' weapons in ways counter to US-stated guidance and rules, and for apparent intentional harm of civilians,” says Jeff Abramson, senior fellow at the Arms Control Association, also based in Washington, DC. “Any weapons transfers at this point continue to show that the United States supports the military approach taken by the Saudis and Emiratis, rather than a political solution, even though the US claims that only a political solution is possible.”

While not all of the 22 announced weapons deals have been detailed in public, State Department announcements and public statements by members of Congress reveal a wide range of American military hardware and expertise now headed for the Gulf States and, presumably, the war in Yemen.

At the top of the list is the sale of “tens of thousands” of precision-guided munitions. Senator Bob Menendez, the ranking Democrat on the Senate Foreign Relations Committee, blocked their sale to the Saudis and the UAE with a procedural move last year. These so-called "smart bombs" are intended to improve targeting and reduce civilian casualties.

On May 24, the State Department released seven announcements that listed weapons systems that may now be delivered to Saudi Arabia and the UAE. As part of the deals, more than a hundred Americans will be going along.

The UAE will be spending $900 million for 20,000 Advanced Precision Kill Weapon Systems that can be fired from Emirati helicopters and fighter jets. The deal requires "up to 20 US Government and up to 30 contractor representatives to travel to UAE." The Emiratis will also pay $80 million for 40 surveillance drones. Some US personnel will stay in the UAE for two years to implement the program. The UAE will pay $102 million for 321 Javelin Guided Missiles, which are anti-tank weapons. Additionally, the UAE will pay $100 million for the US military to train the Emirati Presidential Guard. Thirty-four US Marines are being sent in for that project.

The largest of the publicly announced deals is with Saudi Arabia. The Saudis will spend $1.8 billion for the servicing of their US-made fighter jets, spy, cargo and refueling planes. The deal will station American military and civilian personnel on Saudi military bases. The Saudis will also spend $136 million to keep their spy planes in the air, with 25 US technicians sent to support the fleet.

Rachel Stohl says this is not the first time a US president has invoked an emergency provision in the Arms Export Control Act to send US weapons and personnel overseas in defiance of a congressional ban. “In 1979, the Carter administration used the provision to transfer aircraft and tanks and armored personnel carriers to Yemen,” she says. “And in 1984 the Reagan administration sold Stinger missiles and other missiles to Saudi Arabia. So it's not unprecedented, but it's obviously not very common if we're talking about examples from the '70s and '80s.”

The timing of the State Department announcements — as the Trump administration increases pressure on Iran — could bring relief to the Saudis and Emiratis, who may have depleted their weapons stores after more than four years of fighting in Yemen. But the weapons deals may not intimidate Iran. “Iran's probably laughing about the issues that it has caused,” says Stohl, “because this gives Iran every excuse to continue to arm themselves. So, this is exactly what Iran would want.”

The political response on Capitol Hill included criticism not only from Democrats such as Bob Menendez, but also from Republican Senator Lindsey Graham. “The real problem [is] we’re going back to doing business as usual with Saudi Arabia,” Graham said on Fox News Sunday.

“Congress still has many paths it can take to both register concern about the president misusing emergency powers in this instance and ultimately act to stop the sales and shipments,” Abramson points out. “This starts with speaking out, as many have already, making their displeasure clear. At any point up until delivery, Congress could pass a joint resolution blocking a sale and should immediately consider doing so.”

But it may be too late.

“There is very little [Congress] can do with regards to these particular sales,” says Stohl. ”Those are already in the pipeline and the president has invoked this provision of the Arms Export Control Act which allows him to do this. What they may do is introduce legislation that would prevent such an end [run] around Congress in the future.”

There is a longstanding process by which the executive branch and Congress work together to make arms transfer decisions. Stohl says the Trump administration seems to be trying to undo that. “We need to get back to the basics here and figure out how the executive branch and Congress can work together to make sure that arms sales are in the interest of the United States and that we're not rewriting US law and policy to go around sort of politically sensitive issues.”