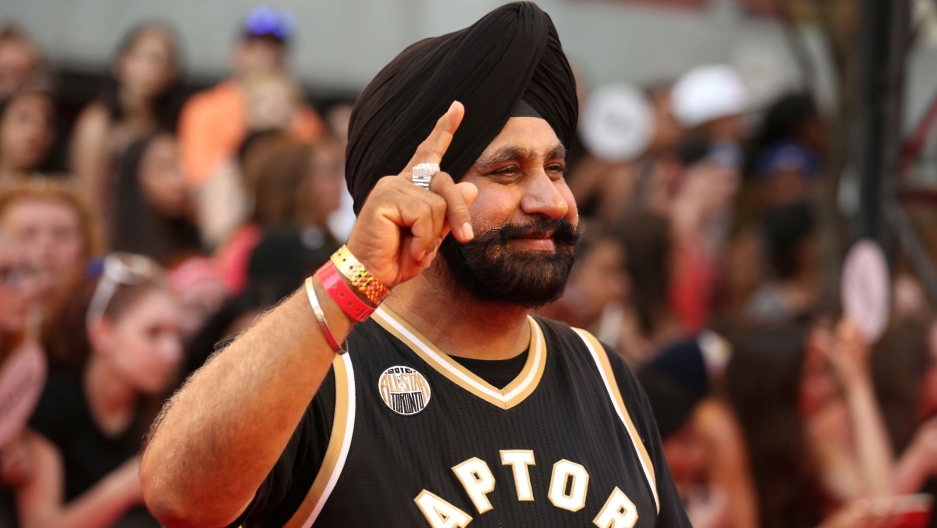 Toronto fans are going nuts. Their basketball team, the Toronto Raptors, is going to the NBA finals for the first time in the franchise's history.

Superfan Nav Bhatia is even more excited than most. If you've ever watched a Raptors game on TV, you've seen Bhatia courtside, in his characteristic Sikh turban and jersey.

Twitter found out about Bhatia over the past weekend in a viral thread:

With the #Raptors about to hit the global stage, I’m going to share a story about what makes Toronto, and Canada, so special. It’s about a guy you’re going to be seeing a whole lot of.

[Hint: It's about racism, sports, and why you'll end up cheering for 🍁]

Bhatia was also targeted by a racist tweet and ended up offering to buy the man dinner.

Bhatia tells The World's host Marco Werman how he got hooked on basketball in the 1990s as a relatively recent immigrant to Canada.

Boy, you know, Boston was supposed to be playing the Golden State this year. That's what the pundits said.

Tell me about yourself. You moved to Canada from India in the 80s. How did you get into basketball?

Well, I was working. I came in '84, and by '95, I was pretty comfortable, and I decided to buy two tickets to experiment and enjoy basketball. Lo and behold, from that day, from the first day, I've never missed a game, I've never been late for the game, and I've never left the game early.

You've been officially dubbed a Raptors superfan. I don't even know what that means — like if a big fan has season tickets? What's a superfan?

In season 98-99, Isaiah Thomas, Hall of Famer, was the general manager. So one day, he called me and told me to come to the midcourt and I did. And he presented me with my own jersey which said superfan No. 1.

Why did Isaiah Thomas pick you?

That's a good question. I think you should call Isaiah Thomas and find out also.

Drake is also a superfan. You ever have to prove to him who's the biggest superfan?

I don't. Drake is a good friend of mine. I knew Drake when he was not Drake.

"He looked at me and said, 'Oh, my cab is here.' On that day, I decided that whatever it takes, how much money how much time it takes, I'm going to change the perception of the mainstream about the Sikhs and the South Asians."

I'm curious, what is the makeup of the crowd of Raptors fans? Has that changed over the past 25 years?

Well, I'm going to tell you, when I first started as a Raptors season ticket holder in '95, there were only 40 to 50 brown people like me, and only one who was wearing turban at the time. What happened is, in '99 after I was given the title of a superfan, one day there was this white guy talking to somebody on the phone and said, "Honey, I got to go my cab is here." He looked at me and said, "Oh, my cab is here." On that day, I decided that whatever it takes, how much money how much time it takes, I'm going to change the perception of the mainstream about the Sikhs and the South Asians.

So what I did — I went to the Raptors and I bought 3,000 tickets to celebrate my New Year's in the arena. And they were surprised — that I'm being crazy, I'm being stupid. But I brought people from all faiths, religions, Muslims, Hindus, Christians, and we celebrated and watched the game together.

And the purpose was to tell them that we might look different, we are different, maybe, but deep inside, 99.99%, we have the same passion, which is [we] love basketball and [we] cheer for the same team, which is the Raptors. I have done that for 20 years. And during the last eight or nine years, all those kids who were 10, 15 years old, have a job and now...they bought the season tickets because they're addicted to basketball.

Nav Bhatia, super fan No. 1, a bigger fan than Drake. Well, maybe the same. Game 1 against Golden State is on Thursday. Nav, who's going to win?

We're going to shock them right away.