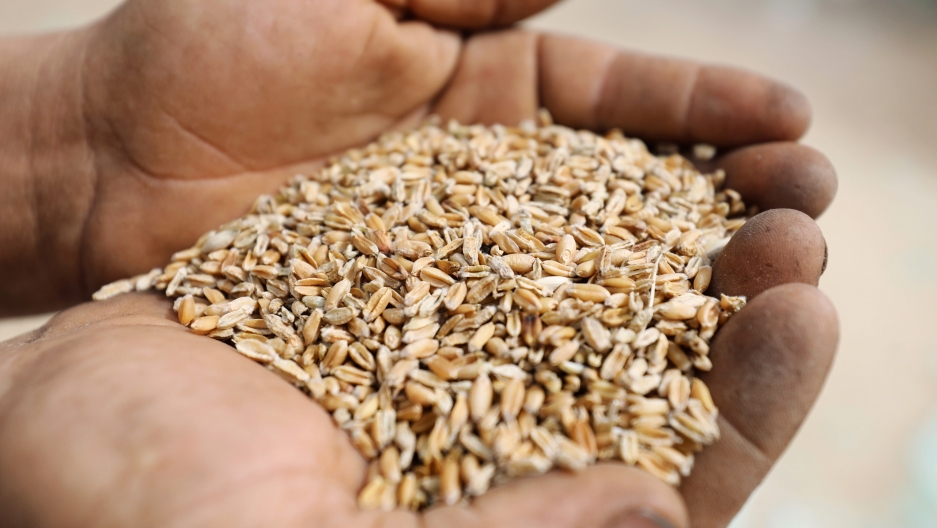 A farmer displays wheat grains at a field in the El-Menoufia governorate, north of Cairo, Egypt, May 1, 2019.

With the emergence of climate change, alternative solutions are needed to improve the availability of food. This is particularly true in Africa, where most countries rely on rain to water their plants. Consequently, food becomes scarce during periods of drought.

Indigenous African crops can play a pivotal role, which is why we did research on crops that are readily available in African countries and that are drought tolerant. These include sorghum, millets and cowpeas.

Related: Could malnutrition be caused by more than a lack of access to quality food?

Because protein malnutrition and iron and zinc deficiencies continue to be a major nutritional problem in developing countries, especially in Africa, we looked at how these crops could help overcome these problems. We also tried to assess how different grains can be combined and transformed into nutritious foods for the health and well-being of consumers in Africa.

In general, a food’s nutrient content can be affected by how it is prepared, and the unique combinations of different grains it contains. Our study investigated the nutritional benefits of combining grain amaranth with sorghum to produce a fermented beverage. Amaranth has excellent protein quality and can be used to complement the nutritional properties of staple foods that are mainly starch-based.

In addition, both fermentation and acidification with lactic acid can improve the nutritional quality of cereal‐based foods. We found that the fermentation process can make minerals such as iron and zinc in the beverages more easily absorbed by the body.

This is significant given the nutritional importance of these minerals and the role they play in the body, which is why they can help combat protein malnutrition and iron and zinc deficiencies.

There are three primary forms of malnutrition that are prevalent in Africa and are often referred to as the triple burden of malnutrition. The first is macronutrient malnutrition with protein-energy malnutrition (which manifests as kwashiorkor or marasmus) being a prime example. This form of malnutrition occurs when a person does not consume enough quality protein and calories.

For example, a lack of iron, which is commonly found in foods such as spinach and red meat, can result in iron deficiency anemia. A lack of vitamin A, found in food such as mangoes and carrots, can lead to blindness.

The third form of malnutrition is the increase in noncommunicable diseases because of bad eating habits or a low intake of the right foods. The outcomes vary but can manifest as diabetes, high blood pressure, cardiovascular diseases and certain cancers.

Indigenous African crops can play a pivotal role in tackling the triple burden of malnutrition. Not only do they contain the required nutrients to address macronutrient malnutrition and micronutrient deficiency, but they also contain health-promoting components that offer protection against non-communicable diseases.

While the wrong type of food can contribute to illnesses and disease, the right kind of food can prevent illness. To enhance the nutritional quality of foods, different grains can be combined in a single food product.

A typical example is the South African food “samp and beans,” which is a combination of maize (a cereal) and beans (a legume). Such a combination produces a food with enhanced protein quality.

Another example is sorghum, which is an important food crop for people living in Africa’s semi-arid regions. Fermented sorghum beverages are popular in many sub-Saharan African countries and are of social, religious and therapeutic significance. An example of such a fermented beverage is mageu, which is consumed in much of southern Africa.

While sorghum is a good source of minerals and vitamins, its protein is of low quality. Grain amaranth, on the other hand, contains significant amounts of good quality protein. Combining grain amaranth with sorghum can produce a food that has enhanced nutritional quality.

The combination of grain amaranth with sorghum can also improve the quality of the protein contained in these beverages. Our study provides solutions to tackle both protein-energy malnutrition and micronutrient deficiencies.