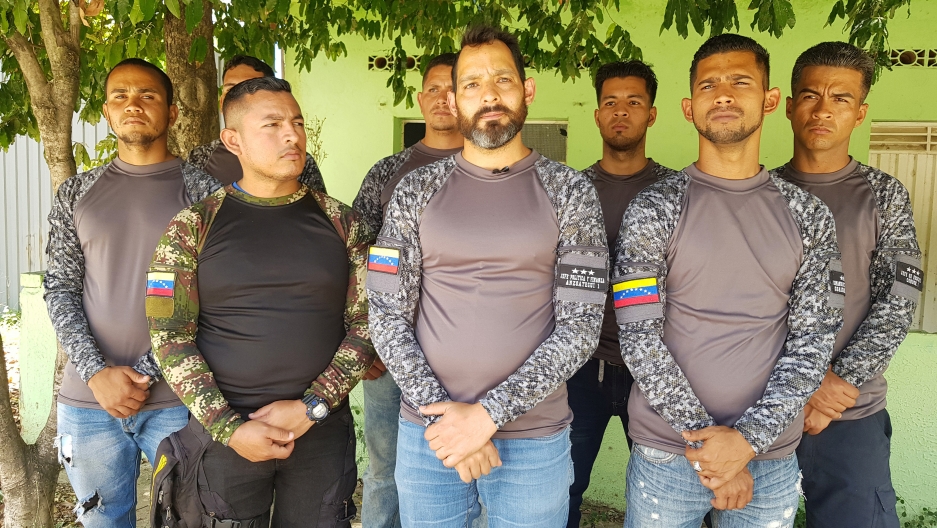 Men who claim to be former Venezuelan police, military and intelligence officers speak with Reuters in Cúcuta, Colombia, May 10, 2019.

Wearing camouflage shirts and combat boots, a Venezuelan militia group stands in formation in the Colombian city of Cúcuta as their commander, a former Venezuelan army sergeant, outlines plans to seize towns across the border before heading to Caracas to help oust President Nicolás Maduro.

Eight men, who said they were defectors from Venezuelan police, army and intelligence services, had gathered near the two nations' tense frontier, from where they said they will lead an attack aimed at overthrowing Maduro and handing the reins of power to opposition leader Juan Guaidó.

Related: Venezuelan military deserters on the brink of homelessness

Dubbing their planned offensive "Operation Venezuela," the ex-army sergeant, Eddier Rodríguez, said there were around 150 men ready to take part with his group. Reuters was unable to independently confirm the status of the eight men or the size of the militia.

"Our goal is to liberate the country," said Rodríguez, 37, who said he is currently working as a security guard in Bogota. "We're troops willing to give our lives if necessary, all 150 of us."

The Venezuelan defense ministry and the information ministry — which handles media inquiries for the government — did not respond to a request for comment about the formation of militias in Colombia.

Victor Bautista, border director for Colombia's foreign ministry, said any groups who actually took up arms would be considered a paramilitary organization and would be detained by authorities if they were found.

"That would be totally rejected by our government and fully taken up by the appropriate authorities to apply corresponding legal measures," said Bautista.

A Colombian intelligence official, who asked not to be identified, said the intelligence service had detected an unspecified number of Venezuelan militia groups in the country but could not act against them because they had not yet committed any crimes. Separately, a high-level Colombian government official who asked not to be named said arrestable offenses could include illegal possession of weapons and conspiracy to commit a crime.

An estimated 1.2 million Venezuelans have crossed into Colombia in recent years, fleeing a painful recession and hyperinflation in their homeland that has left millions of people suffering from hunger and shortages of basic goods. They include increasing numbers of defectors from the armed forces, some of whom are forming militias with the intention of pushing for the overthrow of Maduro.

While such militias are vastly outnumbered in the face of Venezuela's 150,000-strong military, the men told Reuters they were willing to face any consequence if they can rid their country of Maduro's government, underscoring the frustration and desperation of many Venezuelan migrants.

Guaidó cited the constitution in January to assume an interim presidency, saying Maduro rigged last year's election. He has appealed to Venezuela's armed forces to turn against Maduro.

The United States and most Western nations have recognized Guaidó as the South American country's rightful leader. Maduro accuses him of being a coup-monger and so far has retained the loyalty of the bulk of the armed forces.

Rodríguez said his group had been meeting different "resistance" groups in Colombia. He did not provide further details of those groups, or of how they planned to cross the border and launch an attack.

Related: What's the best (and worst) possible outcome for Venezuela?

He said they had acquired handguns, easily available along the border, and were seeking to raise funds to buy further weapons, explosives, bullet-proof vests, food and water

Colombian President Iván Duque has recognized Guaidó as Venezuela's rightful ruler and branded Maduro a dictator. Maduro severed diplomatic relations with Colombia after Duque backed opposition efforts to bring US aid into the country in February, although Duque has ruled out supporting any military intervention.

More than 1,400 members of the national guard and other members of the armed forces have left Venezuela for Colombia since Maduro's troops violently drove back the aid convoys, according to Colombia's migration office. 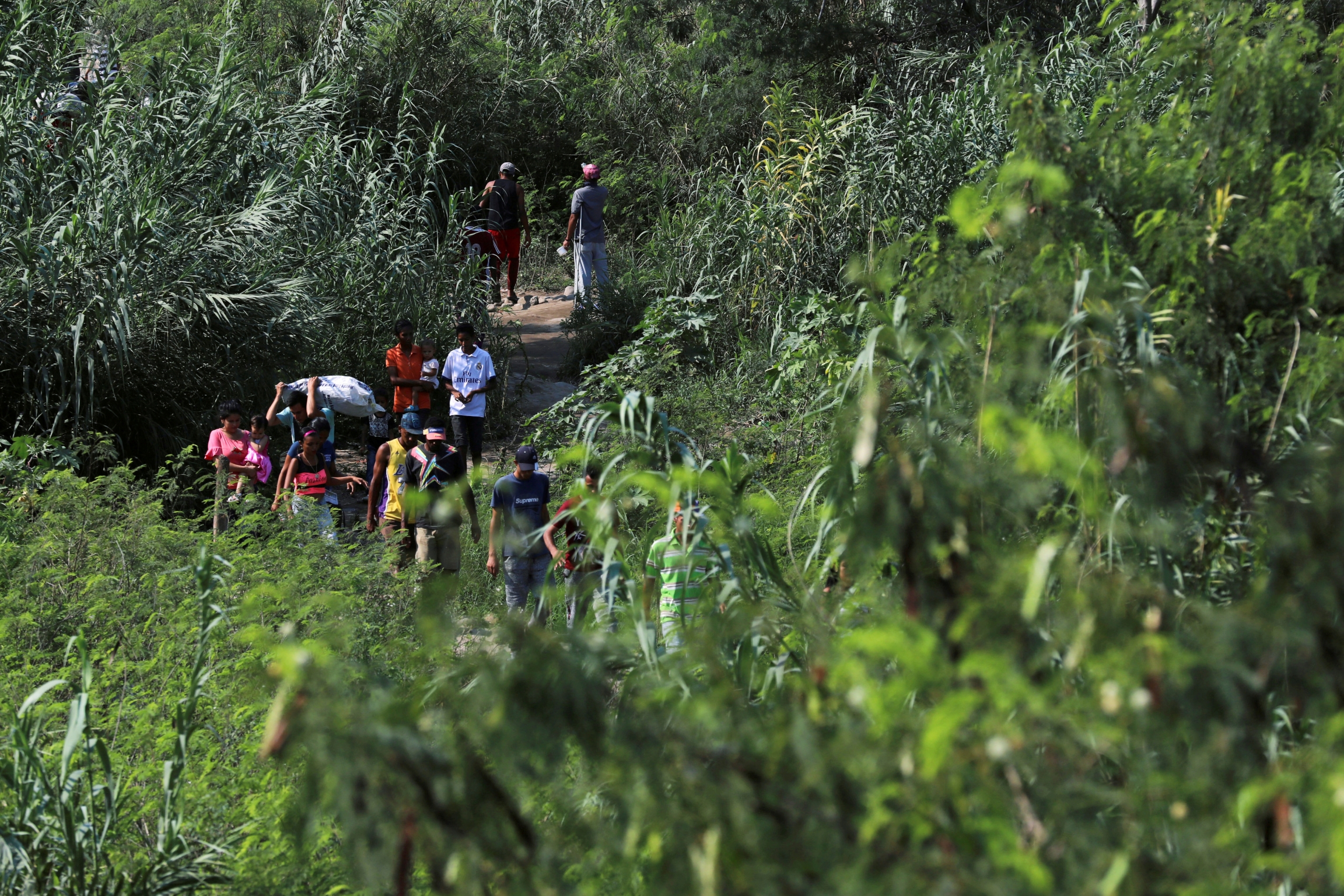 People walk along a pathway near the border between Colombia and Venezuela on the outskirts of Cúcuta, Colombia, May 1, 2019.

As per an agreement with the Venezuelan opposition, Colombia provides dissident military officials with food and housing, and the right to work.

In an interview in Caracas, Guaidó said that if any decided to take up arms that would be due to Maduro's refusal to agree to free and fair presidential elections.

"This reflects the discontent that there is in the armed forces: soldiers looking for alternatives and solutions because Maduro has shut off the electoral option," Guaidó told Reuters.

He did not immediately reply to a request for comment on Bautista's assertion that groups who took up arms in Colombia would be detained.

Maduro has said last year's presidential vote was fair and has branded defecting soldiers as "traitors."

On April 30, Guaidó attempted to rally Venezuela's armed forces to rise up, but only a few dozen soldiers and one top government official defected. The military top brass reaffirmed their loyalty to Maduro.

Over the years, Maduro — and former President Hugo Chávez — won the loyalty of the armed forces in part by promoting hundreds of officers to the rank of general and rewarding them with lucrative positions in state-run entities, like oil company PDVSA.

Rodríguez's team said they have made contact with garrisons in Venezuela and many were ready to fight once the operation began. He did not provide details about specific garrisons and Reuters could not independently verify the information.

"They're waiting for us to enter to make their troops available (to fight)," said Pedro Meneses, an industrial engineer and rights worker who said he managed the militia's logistics. "We want to do this with minimal bloodshed."

Former Sergeant Major Efrén Fernández, who deserted to Cúcuta in February, told Reuters that he was also ready to fight for Guaidó.

"Mr. President Guaidó, rely on our support," he said. "Here are your soldiers ready for battle, for combat."