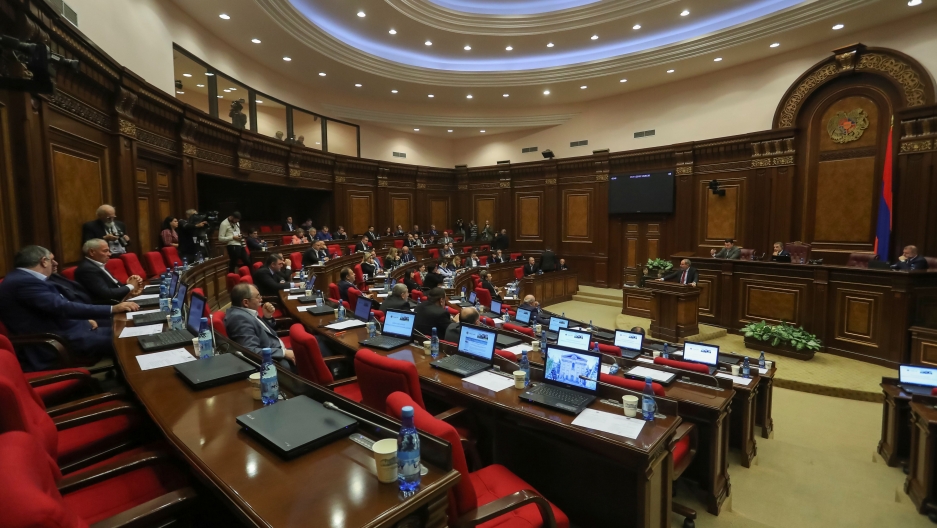 Lilit Martirosyan misses the chance to go and sit somewhere outside to drink coffee. She hasn’t been able to do that for the past seven weeks. It’s too dangerous for her to even look out her own window.

People can recognize her face now.

She became the first transgender woman to speak to Armenia’s parliament last month. A video of her speech was shared around the world and applauded by LGBTQ activists and supporters. But she’s been getting death threats since then, and she’s afraid to leave the house.

Armenia ranks as one of the worst countries to live in Europe for LGBTQ people, according to a new assessment this month by the International Lesbian, Gay, Bisexual, Trans and Intersex Association (ILGA-Europe). The post-Soviet republic came in near the bottom of the 49 countries listed, barely topping Azerbaijan and Turkey.

At a parliamentary hearing held by the National Assembly in Yerevan on April 5, Martirosyan, the president of the Right Side nongovernmental organization, called for legal protection for transgender people in Armenia who often face harassment and violence.

“I ask you to see me as a collective figure,” Martirosyan told Armenian lawmakers and activists. “I encompass in myself the tortured, raped, kidnapped, subjected to physical violence …  unemployed, poor and morally abandoned Armenian transgender’s image.”

Martirosyan, herself, has been attacked multiple times on the streets of Yerevan. Three months ago, her teeth were broken and her head was badly injured, she told The World.

She says the police didn’t do anything, and that she and her community don’t feel safe.

In fact, her NGO tallied 283 crimes against transgender people who were “tortured, raped, kidnapped, subjected to physical violence, burned, immolated, knifed, subjected to murder attempts, killed” in Armenia from 2016 to 2018.

Right Side, which claims to be the first and only organization that works to ensure protections for transgender people and sex workers in Armenia and in the South Caucasus, saw Martirosyan’s speech as a victory for themselves and the rest of the LGBTQ community in the country.

But not everybody was celebrating.

As soon as Martirosyan’s three-minute speech ended, Naira Zohrabyan, a member of parliament from the opposition Prosperous Armenia Party (BHK) who chaired the meeting, asked her to leave the hall.

Zohrabyan called her speech “disrespectful,” adding that it had nothing to do with the agenda that day. The hearing was meant to cover issues of judicial reform and disability rights.

A few days later, on April 8, there was backlash against Martirosyan.

More than 100 supporters of nationalist and conservative groups led anti-LGBTQ protests in front of the National Assembly against Martirosyan and her speech, according to Radio Free Europe. A few parliamentarians verbally attacked her. 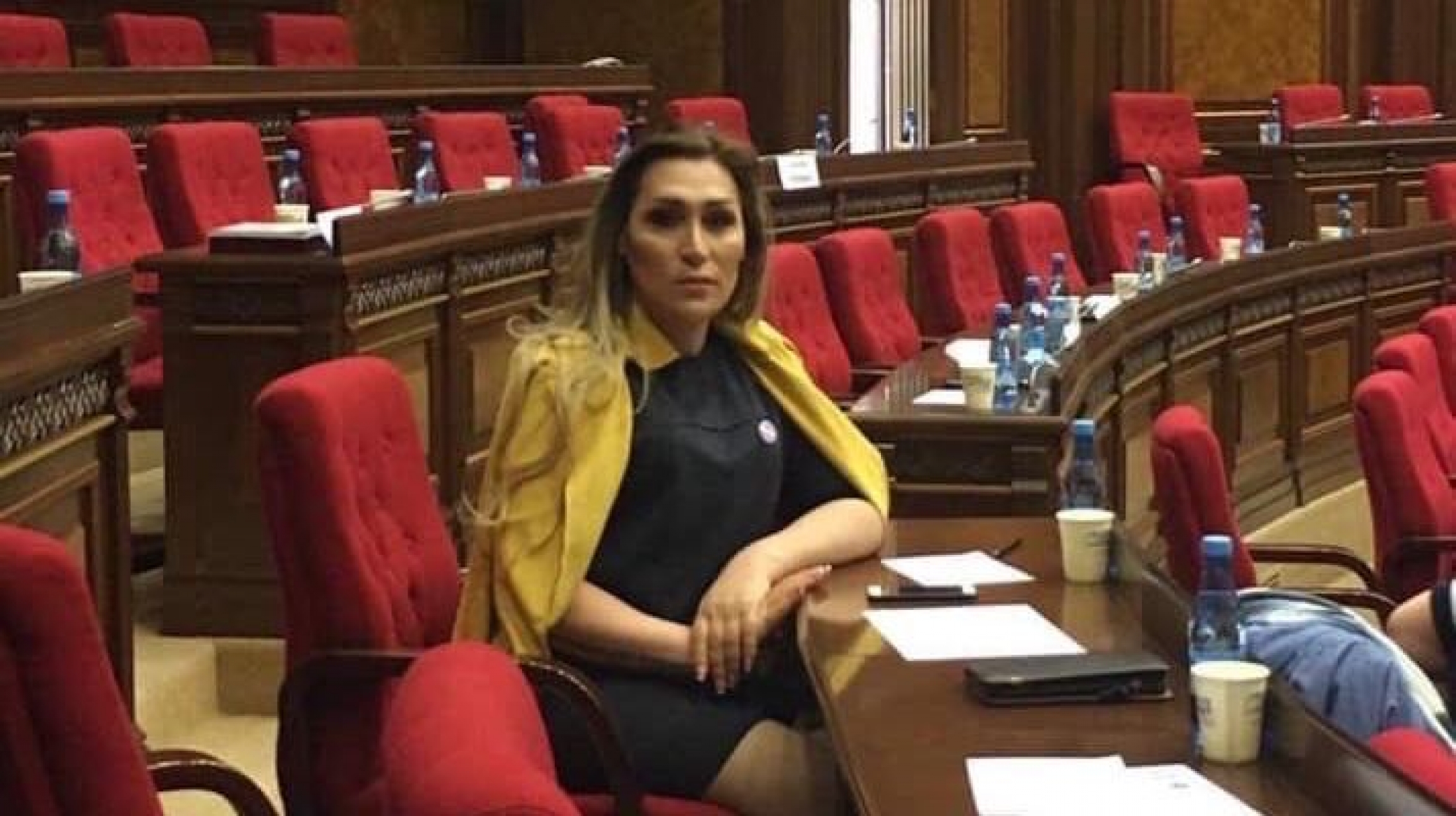 Courtesy of the Right Side

One MP said Martirosyan should be burned in Republic Square, a popular center in the middle of the capital.

Ever since then, Martirosyan and the Right Side have received dozens of death threats. The NGO closed down for a few weeks but reopened its doors on April 25.

Max Varzhapetyan, the community and office assistant at the Right Side, says they will continue to work because it’s their policy to be visible transgender activists.

Varzhapetyan, who’s bigender and uses they/them pronouns, says that they and Martirosyan are particularly at risk since they were both at parliament that day. The only places they go are their homes and the NGO’s office to avoid harassment and violence, Varzhapetyan says, speaking on Martirosyan’s behalf as well.

“The whole situation changed after the speech,” said Varzhapetyan, 23. “Because previously, people didn’t know who trans people were. Lilit’s speech delivered a powerful message. And even if people hate us and want to kill us, they learned about what Lilit [said].”

Martirosyan started her activism at age 13. And by 15, she started taking birth control pills for estrogen because she says there are no other options for transgender women in Armenia. Today, she goes abroad to Ukraine for hormone replacement therapy pills.

Doctors refuse to treat transgender people because of the discrimination, she says.

It’s one of the issues her NGO is working to combat.

In 2015, she became the first transgender woman in Armenia to legally change her name on her passport. The Right Side negotiated with the Civil Status Acts Registration Agency of the Staff of the Ministry of Justice to make the name change possible. Two years later, it became official policy in the country: Transgender people could legally change their names without having to provide psychological documentation or having three witnesses present, according to Varzhapetyan.

But the organization says there’s still plenty of work to be done.

A transgender person is eligible to change their passport only if they’ve undergone sex reassignment surgery in Armenia.

Although Martirosyan had the surgery, which was performed by a Russian doctor, she has chosen to keep her sex as “male” on her passport. She says she won’t officially change her gender to match her identity until every transgender person in Armenia has the right to do so, with or without sex reassignment surgery.)

Martirosyan and the Right Side have largely received international support. The United Nations office in Yerevan and the European Union both released statements condemning violence against the LGBTQ community in Armenia.

But MP Zohrabyan says the whole country was shocked by Martirosyan’s presentation on transgender rights.

“We need time for that,” Zohrabyan said in Russian. “Our church is not ready for this conversation.”

The state-financed Armenian Apostolic Church is believed to be the world’s oldest Christian institution. It’s widely seen as a major part of the country’s national identity. After Martirosyan’s speech, a priest burned incense to sanctify the area where she spoke, reported OC Media, a news outlet that covers the Caucasus region.

“Our society is completely different,” Zohrabyan said. “It’s not that of Holland, Austria or France. We need to accept our mentality the way it is.”

Although Zohrabyan was widely criticized for her reaction to Martirosyan, which some called discriminatory, BHK officials wrote a statement defending the MP.

The country’s peaceful transition to government last year, known as the “Velvet Revolution,” spurred hope for a new Armenia. For the LGBTQ community, too.

Armenian Prime Minister Nikol Pashinyan “publicly denounced any threats of violence and hate speech” on “numerous occasions,” a spokesman said in an email to The New York Times.

But many activists say that not much has changed for the community under Pashinyan, who was swept to power by the street protests.

Brett Burnham, a gay man who moved from the US to Yerevan in August 2018 to work as a public health professor at the American University of Armenia (AUA), blames the lack of dialogue around these issues.

“So, this idea that Armenians can't change or that this is just a patriarchal society might be true for now because people aren't willing to have these conversations, and the fact is — and there's data lots of data to support this — that LGBTQ people leave this country. They don't want to stay here they don't feel supported.”

According to a 2015 report by Pink Armenia, an LGBTQ rights group, 5,891 citizens left Armenia due to discrimination based on gender and sexuality between 2011 and 2013 alone.

At AUA, Burnham sensed a need for a safe space for gay, lesbian, transgender students allies on campus. That’s what led him to start a group under conditions by the school’s administration that he keep it anonymous. He would have to name it “International Students Meeting,” he said.

Students would meet informally and share coming out stories, said Burnham, who researches cancer and LGBTQ health disparities in Armenia and beyond.  “These students are deeply traumatized,” he said.

“I knew there was homophobia in Armenia, but I didn’t know the extent to which it existed,” said Burnham, 35. “I was a little surprised. But then when I met the students, it was clear that they were petrified.”

He didn’t expect to be harassed himself. Especially not by his own students over email and social media.

“I have been verbally attacked and attacked via email by students viciously, and there's no consequence for them because of my sexuality and the research that I do,” he said.

In his course evaluations, one student wrote that “Dr. Burnham performed great as an instructor. In contrast, he is an extremely aggressive homosexual’s advocate.” Another student said, “this is discrimination of students, because we are imposed to tolerate something that [we] don’t want to invade our environment.”

Half a year into his tenure at the public health department, he was asked to leave and never come back by AUA, a university accredited by WASC Senior College and University Commission in California. His annual contract wasn’t renewed. Burnham says he doesn’t know why. He wasn’t given a reason. He suspects it might be because of his sexuality.

Yeva Margaryan, one of Burnham’s advisees in the public health department, said she hasn't witnessed any harassment by the administration. But, she said, it is likely many students didn’t understand why he was “talking openly about his sexuality.”

“There are a lot of [gay people] in Armenia, but not very many are open,” Margaryan, 23, said. “I just think it’s about our mentality. It’s Armenia. And our culture is like that. I just want [Burnham] to understand that he has nothing to do with that.”

AUA responded to The World’s request for comment and said that it has a “non-discrimination policy in its hiring practices,” and that “Dr. Burnham offered information about his sexual orientation. However, that information was inconsequential in the hiring decision.”

The statement continues, “Dr. Burnham signed a one-year contract. The decision not to renew his contract was made in accordance to the Armenian law and considering several factors, including the needs of the program and student feedback. Obviously, personnel matters are confidential and to protect the rights of the employee and the employer cannot be shared with third parties. But we assure you that Dr. Burnham’s sexual orientation had no effect on the decision not to renew his contract.”

Burnham, who is currently suing the university over an intellectual property issue, says that he feels exhausted, but “duty-bound,” to his students at AUA who respect him and his work. He’s going to finish grading papers until the end of the semester. He says he’s glad that this chapter of his life is almost over.

As he packs his bags to leave Armenia next month, Martirosyan is more determined than ever to stay in her country and continue fighting for LGBTQ rights there.

Editor’s note: Lilit Martirosyan is no relation to Lucy Martirosyan, who authored this story. This story has been updated to further clarify what harassment Yeva Margaryan witnessed.