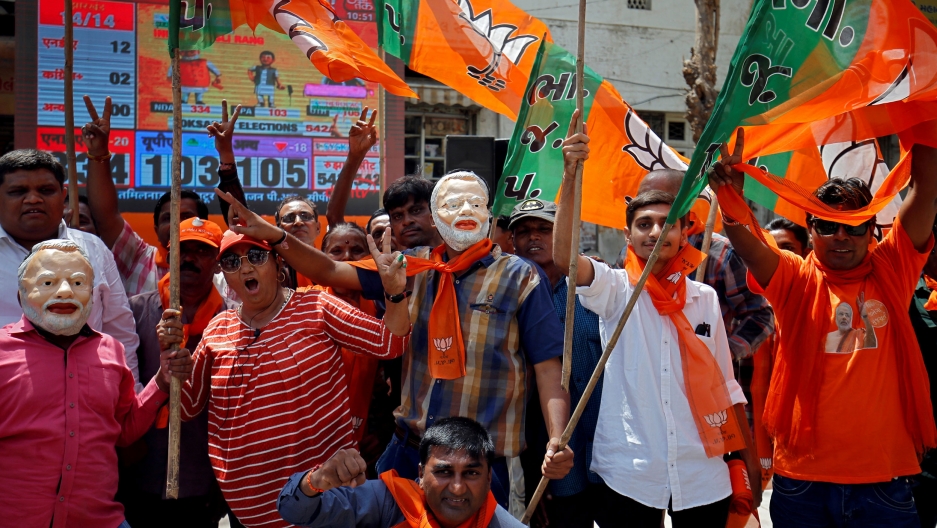 It what is the first back-to-back majority for a single party since 1984, Indian Prime Minister Narendra Modi's Bharatiya Janata Party (BJP) scored a dramatic election victory on Thursday.

The Hindu nationalist party is on course to increase its majority on a mandate of business-friendly policies and a tough stand on national security.

Modi's re-election reinforces a global trend of right-wing populists sweeping to victory, from the United States to Brazil and Italy, often after adopting harsh positions on protectionism, immigration and defense.

Official data from the Election Commission showed Modi's BJP ahead in 300 of the 542 seats up for grabs, up from the 282 it won in 2014 and more than the 272 seats needed for a majority in the lower house of parliament.

"Together we will build a strong and inclusive India," Modi said on Twitter. "India wins yet again!"

Modi has slashed red tape in the world's fifth-largest economy, though some overseas firms, including Amazon, Walmart and Mastercard, have complained about policies they say are designed to benefit domestic rivals.

He will face demands to provide jobs for the tens of millions of young people coming on to the market in the next few years and to boost depressed farm incomes.

"The immediate challenges are to address employment, the issue of agricultural income and revive the banking sector," said Madan Sabnavis, chief economist at Care Ratings in Mumbai.

But making good on his promise of unity will be difficult as the BJP campaign was often divisive, and India's Muslim minority has expressed fears that policies aimed at pleasing the Hindu majority could imperil their livelihoods.

Modi's pledge of a strong stand against a separatist movement in Muslim-majority Kashmir has fueled tension with nuclear-armed rival Pakistan, although its prime minister, Imran Khan, congratulated Modi on his win.

"Look forward to working with him for peace, progress and prosperity in South Asia," Khan added on Twitter.

Besides a harder line on national security, BJP members will look to Modi for progress on a project to building a Hindu temple on the site of a mosque demolished by Hindu zealots in the northern holy town of Ayodhya in 1992.

"I want Modi to finish terrorism from Kashmir (and) make Pakistan bite the dust again and again," said Shekhar Chahal, a BJP worker from the capital, New Delhi.

"I am confident that Modi will also make the temple in Ayodhya." 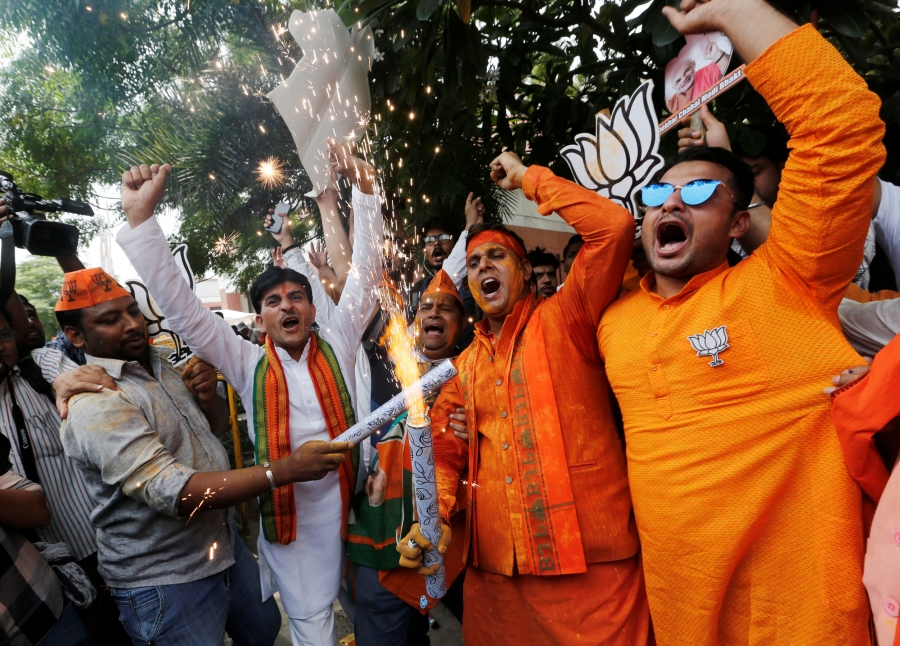 BJP supporters celebrate after learning the initial election results outside the party headquarters in New Delhi, India, May 23, 2019.

Cheering supporters set off firecrackers and showered the mastermind of the campaign, BJP President Amit Shah, with petals as he arrived at party headquarters in New Delhi.

"It's a stamp of approval by voters on the honest and decisive leadership of Prime Minister Modi," said Nalin S Kohli, a BJP spokesman.

The NDA's predicted margin of victory, at 348 seats versus 85 for the Congress-led United Progressive Alliance, according to broadcaster NDTV, far exceeds survey forecasts in the run-up to the vote.

Most polls indicated a victory for Modi's alliance but expected it to fall short of an overall majority.

Final results are due by Thursday evening.

Modi was under pressure when he began campaigning, losing three state elections in December amid rising anger over farm prices and unemployment.

However, campaigning shifted toward India's relationship with Pakistan after a suicide bomber killed 40 Indian police in February in the Himalayan region of Kashmir claimed by both countries.

Modi ordered an air strike on what India said was a militant training camp on the Pakistani side of the border, a tough response that benefited the right-wing BJP, analysts said.

While Pakistan has signaled a willingness to open talks with India, it also displayed its military might, with the test of a surface-to-surface ballistic missile with a range of up to 1,500 miles.

The BJP has also capitalized the star power of Modi, a frenetic campaigner, as well as its superior financial resources.

It outspent Congress by six times on Facebook and Google advertising, data showed, and by as much as 20 times overall, sources told Reuters this month.

The main opposition Congress party was ahead in just 52 seats, but its leader Rahul Gandhi, twice defeated in general elections by Modi, refused to rule out resigning as party chief in a brief televised news conference.

Gandhi, whose father, grandmother and great-grandfather all served as prime minister, lost to the BJP candidate in the northern constituency of Amethi the family has held almost continuously for the last four decades.

But he was leading in the southern constituency from which he is also running for parliament.

"The Congress party has not been able to improve at all," said Rahul Verma, a fellow at the center for Policy Research in New Delhi.

"One big story is the emerging challenge for the Congress to remain a national alternative to the BJP. That now is under question."

In the populous northern state of Uttar Pradesh, which sends the largest number of lawmakers to parliament, the BJP was leading in 60 of the 80 seats in the fray, out in front of a powerful alliance of caste-based parties campaigning to improve rural conditions.

"After the air strike on Pakistan, almost all these important issues started fading and farmers decided to cast their ballot for the BJP," said Raghubar Das, 55, who grows rice and wheat on the outskirts of Ayodhya, which many devout Hindus believe to be the birthplace of the God-king Rama.

"Mind you, they didn't vote for the BJP, they voted for Modi. Everyone loves a strong a leader."

The party also won seats in several states where it has long struggled, including West Bengal, where it took on the Trinamool Congress, a powerful regional party. Data showed it leading in 19 of 42 seats, surpassing the two it won in 2014, data showed.

Indian stocks surged more than 5 percent this week to hit record highs on Thursday, but the euphoria fizzled quickly, with stocks and the rupee ending the day weaker, as the focus returned to a faltering economy.

By Alasdair Pal and Mayank Bhardwaj