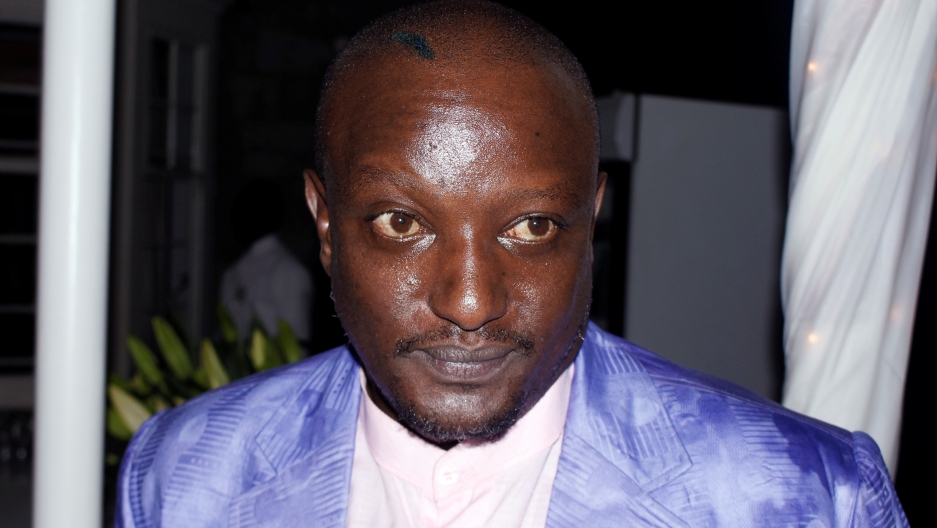 Kenyan writer Binyavanga Wainaina, who challenged stereotypes of Africa with biting satire and took on prejudice by documenting his life as an openly gay man, is seen at an event in Nairobi, Kenya, in this picture taken Sept. 4, 2014.

Binyavanga Wainaina, the award-winning Kenyan writer who challenged stereotypes of Africa with biting satire and took on prejudice by documenting his life as an openly gay man, has died at 48.

The author, essayist and campaigner — who also championed African literature through the Kwani Trust he founded with other writers — passed away in Nairobi on Tuesday, the organization's chairman, Tom Maliti, said.

Related: Kenya's gay community comes out, one story at a time

Wainaina's 2006 essay, "How to Write About Africa," published in Granta magazine, was a pointed and hilarious lesson to would-be journalists and historians. Its compilation of the absurd, yet all-too-common, clichés was a call for more nuanced portrayals:

"Among your characters, you must always include The Starving African, who wanders the refugee camp nearly naked, and waits for the benevolence of the West," Wainaina wrote in satirical instructions to aspiring writers.

"Her children have flies on their eyelids and pot bellies, and her breasts are flat and empty. She must look utterly helpless. She can have no past, no history; such diversions ruin the dramatic moment."

These 1370 words have had a profound influence on my career - and they ring as true today as they did when first published in 2005. Rest in peace, Binyavanga Wainana. https://t.co/PDzFuywrci

Binyavanga Wainaina, the prize-winning author, journalist and activist, has died at the age of 48. We are deeply saddened by this tragic loss to literature, and to the world. pic.twitter.com/19MN2zOebR

Others say his most consequential essay was "I am a homosexual, mum," where Wainaina imagines what it would be like to come out to his late mother. The World's Marco Werman interviewed Wainaina in 2014 on the story behind this essay, which was simultaneously published in Chimurenga and Africa is a Country.

The reaction to this powerful essay? "It's been a hurricane," Wainaina laughed in the interview. "It was a shock and continues to be an unloading shock for many. ... It's been incredible."

The writer Binyavanga Wainaina has died at aged 48. Apart from "How to write about Africa" for @GrantaMag, the most consequential essay he wrote was this: On his coming out, written on his birthday in 2013. https://t.co/n1d24u5D2M

He described this essay as "a lost chapter" from his memoir, "One Day I Will Write About This Place," published in 2012.

"Nobody, nobody, ever in my life has heard this. Never, mum. I did not trust you, mum. And. I. Pulled air hard and balled it down into my navel, and let it out slow and firm, clean and without bumps out of my mouth, loud and clear over a shoulder, into her ear. 'I am a homosexual, mum'."

The memoir received critical acclaim from The New York Times and The Guardian, among others, but Wainaina regretted leaving out his love life. With his groundbreaking essay, "I am a homosexual, mum," Wainaina became one of the first Kenyan public figures to come out as openly gay.

Others say Wainaina's fearless and fierce writing and criticism of the West transformed the literary and intellectual landscape in East Africa and throughout the world:

I know we all love Binyavanga Wainaina on how not to write about Africa, but this piece is a far more uncomfortable look at Western aid workers and journalists on the continent that also deserves our attention. Rest in Power. https://t.co/OcSxK3oMOZ

The essay is a scathing indictment of aid workers and the development-industrial complex in East Africa:

"You are a child of the human rights age. A post-cold war child. In this age, which has no ideology, brown and black places are flat issues: how far from gay freedom is (fill in African country)? In this age, all local knowledge is carried by aid organizations."

Wainaina won the prestigious Caine Prize for African Writing in 2002 for his short story collection, "Discovering Home," and went on to set up Kwani?, a literary journal that grew into a network dedicated to publishing new writers from Africa.

The name, literally translated, is Swahili for "so what?"

"We chose the name because it indicates a stance, a reaction," Wainaina's friend and Kwani? cofounder Billy Kahora said in a 2009 interview. "It’s our form of rebellion against a country that has unilateral, prescriptive, too-structured ways of doing politics. We want to question the status quo with new, fresh ideas and new thinking."

"Kwani? inspired a generation of writers younger than Binyavanga to also write poetry, short stories, novels and writing became something that people believed was a career that they could pursue."

"His legacy is Kwani? and the many new writers who were contributors to that journal and for whom opportunities opened up," Maliti said. "Kwani? inspired a generation of writers younger than Binyavanga to also write poetry, short stories, novels and writing became something that people believed was a career that they could pursue."

Both new and established writers posted tributes on Twitter, many of them noting Wainaina's influence on their work.

Ethiopian American writer Maaza Mengiste reflects on all the spaces Wainaina opened up to writers across the continent:

Just hearing the news that Binyavanga Wainaina is dead. I am so heartbroken to hear this news. What a joy to have talked to him, to have read his work, to have walked along a path he opened for so many of us. RIP Binj. https://t.co/5l6EGOtIgv

"I want to see a continent where every kind of person’s imagination does not have to look for being allowed. Me, I’m an African, and I’m a pan-Africanist. I want to see this continent change . . ."

Kenyan writer Yvonne Adhiambo Owuor, the author of "Dust," directs her lament to Wainaina, asking, "Who told you you could leave? Sneak out of your body at night without leaving a new address?"

Face tilted, eyes piercing, he said, "You have exactly 3 seconds to reorganise this crap." You, there. You! Who told you you could leave? Sneak out of your body at night without leaving a new address? To whom does one now go in fear and trembling with first draft manuscripts? pic.twitter.com/DSawF6KGhY

In life some people make you continue in the path you're in and when it comes to writing, Binyavanga Wainaina was one of those guys. His writing packs a punch, makes you nostalgic and then leaves you unsettled. Rest Well Binyavanga. Asante.

In 2016, on World AIDS Day, Wainaina announced on Twitter that he was HIV positive. He had been in and out of the hospital for the past year and suffered several strokes, Maliti said. "He had been ailing for a while," he added, without going into further detail.

Wainaina was also known for his decision to live as an openly gay man in Kenya, where gay sex is illegal under a colonial-era penal code and homosexuality is taboo. A high court ruling on whether to uphold that law is due on Friday.

In 2014, he spoke to the Guardian newspaper about his decision to make his home in a Nairobi suburb, rather than abroad: "This is my place ... I want to put a stake in the ground. My mum and dad are not here. It's kind of my turn."

"Binyavanga Wainaina was the public intellectual we needed but didn't deserve. The world is worse off today without him to challenge our prejudices and defend the humanity of everyone. And now his watch is ended," wrote BBC Africa Business Editor Larry Madowo.

He was a relentless advocate, a booming voice, a provocateur who pushed for new, more inclusive narratives about Africa in all its complexity and beauty.

In this interview with @AJEnglish Binyavanga Wainaina never minced words about his thoughts on the West and the narrative the West had of Africa. He was an advocate for the change in how Africa was perceived, a booming voice we'll miss!!#RememberingBinya #OurContinentOurStories pic.twitter.com/iCYtVRk9x7

Welcome to Planet Binya — a full archive of Wainaina's prolific life and words.