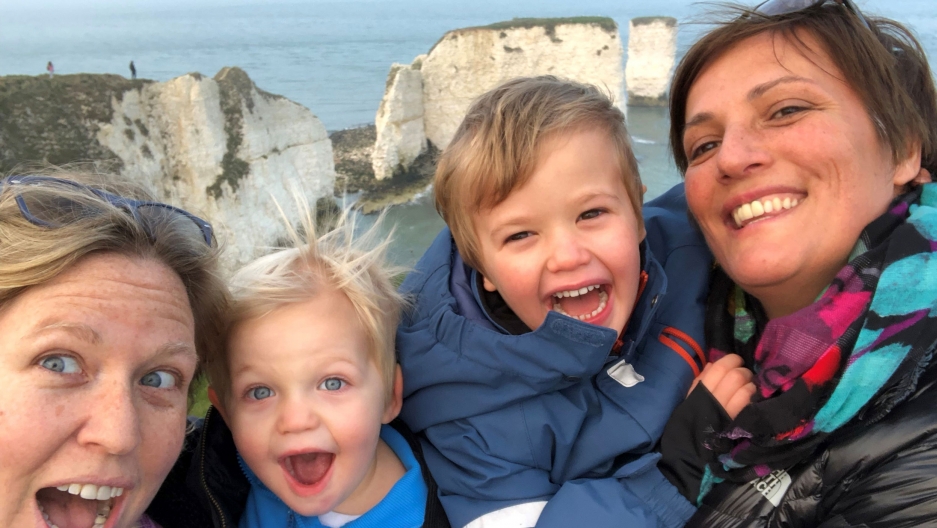 US citizen Allison Brixt, left, her sons Massi and Lucas, and her wife, Stefania Zuccari.

Lucas Zaccari is the 4-year-old son of American citizen Allison Blixt and her wife, Italian citizen Stefania Zaccari. But in the eyes of the State Department, Lucas isn't eligible for US citizenship through Blixt — a right typically afforded all children of US citizens, even when they are born abroad. That's because Zaccari, not Blizt, gave birth to the boy. The State Department deemed Lucas' younger brother, Massi, eligible for citizenship, however, because Blixt was the one who gave birth to him.

It's one of three recent high-profile case where the US government has denied birthright citizenship to a child born overseas to a same-sex married couple. In all three instances, the children have been treated differently from siblings that share biological ties to their US citizen parents.

Blixt and Zaccari are suing. Last week, a federal judge in Washington, DC, denied the State Department's motion to dismiss their lawsuit and allowed it to proceed. The couple has argued that the US government is discriminating against same-sex couples by denying their child birthright citizenship. Another case involves two boys born overseas to a same-sex gay couple where only one parent is a US citizen. A federal judge in California ruled earlier this month one of their sons, who is not biologically related to the US citizen father and was born via surrogate, is eligible for citizenship. The State Department has appealed.

The World's Marco Werman spoke with Blixt and Zaccari to learn what's next in their case.

"They said, 'OK, well, because you are not his genetic or gestational mother, Allison, he does not get citizenship'."

Blixt: When Lucas was born at the end of January 2015, we expected everything to be smooth because we were in fact legally married. We are both on his birth certificate. We went to the embassy with all the paperwork and they started asking us questions — unexpected questions, like who carried him. And we said Stefania carried him. And whose eggs were they? And we said Stefania’s eggs. And they said, “And who was the donor and where is he from?” So we thought, “This isn't going to plan. Something is wrong here.” And in the end they said, "OK, well, because you are not his genetic or gestational mother, Allison, he does not get citizenship."

Marco Werman: And your second child was granted citizenship. What happened there?

Blixt: We wanted to have another child, and we were lucky to have Massi. They were both born in London. And I gave birth to Massi. And when we applied for his citizenship, it was granted. We also reapplied for Lucas at the same time thinking maybe the State Department will see the error of its ways in between the past two years. And and they said, "You do know that he won't get citizenship, but Massi will." But I knew that we weren't going to let it go this time, that we were going to do something about it.

Blixt: Yes. We filed [a lawsuit] against the State Department January of 2018, and we've only just had last week a ruling from the judge in our case in the District of Columbia that the government's motion to dismiss has been denied. And so we will be going forward with our fight.

Stefania Zaccari, what would you add to what Allison has just told us about these different episodes you went through?

Zaccari: The shock the first time and again the second time. The pain in both occasions, and perhaps the second time even more, because then it was clear that for the US these two kids are treated different.

How much of this is coming from the Trump administration, and how many of these obstacles these rules were already on the books before Trump?

Blixt: It was already affecting us before Trump. As much as we want to point to his administration, in fact it was happening already. And when we filed our lawsuit, we hoped that the government would see the error of its ways at least at that point … and that they would change the policy. In conversations it seemed like they were going to try and change the policy. But I have a feeling it got up higher in the chain and they decided not to. Then they've also decided to appeal. Two [same-sex married men] have also filed suit in California for their son, and they won their case, but now the government is actually appealing in the 9th Circuit. And I do not understand why the government feels the need to actually spend time, energy, resources, money appealing something that is so legally straightforward.

You're living in London. How much is that a function of these laws on birthright citizenship?

Blixt: The reason we moved here in the first place was because of the Defense of Marriage Act. When we met, Stefania was living in Italy and I was living in New York, and we wanted to live in New York together. But Stefania couldn't get a visa to live there. So we had to make the difficult choice to move to be together. So we chose love and moved to London. And then now, if we wanted to move to the US, I would have to apply to sponsor Lucas to get him a green card. And, yes, it's a logistical possibility, but psychologically and philosophically, it's wrong.

Why is it important to you that your kids become American citizens?

Blixt: Being American is a fundamental part of my identity and part of who I am and for my children — that is a big part of their identity too. And also for Lucas, to be told you're not as much a part of Allison as Massi is, is just heartbreaking. When we started this fight, he was too young to understand, but he is now at the age where he asked questions about everything, and I mean everything. I don't want him to be exposed to it. Because how do I explain to him, "You are different from your brother. You're not as much mine as he is"? I just don't want to. I shouldn't have to.

"Because how do I explain to him, 'You are different from your brother. You're not as much mine as he is'? I just don't want to. I shouldn't have to."

What are you thinking about the day that you know they both are actually asking questions about this and you will have to explain it to them?

Zaccari: I really hope that we don't have to get to that and they won't have to watch us going through immigration in the US all the time by going via the longest queue — or that at least it's just me who has to do that, rather than Lucas as well. I'm hoping that [these issues] all get solved and we don't get to that so that we don't have to explain it, at least now. When they are old enough, we can proudly explain how we have fought for them.