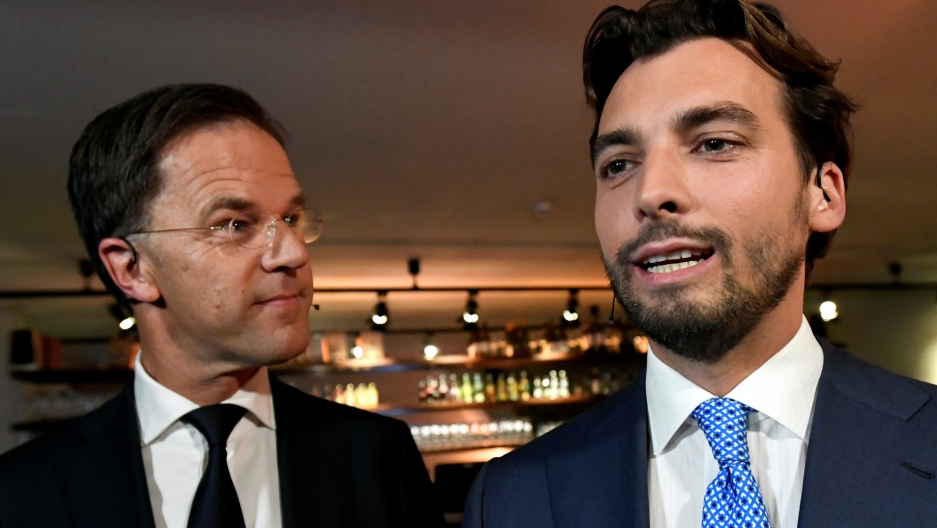 Dutch Prime Minister Mark Rutte of the People's Party for Freedom and Democracy and Thierry Baudet of the Forum for Democracy party arrive to take part in a televised debate on the eve of European elections in Amsterdam, Netherlands, May 22, 2019.

With all the politicking and bureaucracy involved in the European elections, often just attracting voter interest can be a big challenge. But this year’s European elections — which kick off across the continent Thursday — are different.

The rise of far-right Eurosceptic parties has fevered speculation that this week’s election results could determine the future of the European project.

As the first country to vote, along with exit-bound Britain, all eyes will be on the Netherlands and its exit polls Thursday night, where young and charismatic Thierry Baudet, leader of new far-right party, is hoping to gain seats in the European Parliament.

The Netherlands is no stranger to populist politicians.

The Netherlands is no stranger to populist politicians. Flamboyant controversial politician Pim Fortuyn, who called Islam a “backward” culture, was assassinated while campaigning in Hilversum, in northern Netherlands, just days before the 2002 general elections. Blond-haired Geert Wilders, often dubbed the Dutch Donald Trump, soon took Fortuyn's place. With an anti-Muslim, anti-immigrant stance Wilders established his Party for Freedom, which won seats in the 2014 EU parliamentary elections.

Now, Baudet has outshone Wilders in local elections as a younger, even more flamboyant leader. Baudet's new party Forum for Democracy (FvD) is predicted to top the polls in the European elections. At 36, Baudet is seen as the intellectual face of the far-right movement in the Netherlands. Less crude than Wilders, he peppers his speeches with Latin phrases and rails against the media, universities, established political parties and climate activists.

“The paradox is that he argues against the elite, against the liberals living in Amsterdam, with their expensive houses, talking about cosmopolitanism and drinking expensive wines,” said Lievisse Adriaanse. “At the same time, he’s part of that same elite. He was educated at Leiden University, which is a pretty elitist university in the Netherlands. He lives in the center of Amsterdam and has been part of the same intellectual circles for years.”

Baudet may rant against the media, but there’s no question he enjoys the limelight.

“He’s an avid social media user posting also controversial pictures of himself — lying on a piano or naked by a swimming pool.“

“He has, for example, appeared in Parliament for a debate about defense policy dressed as a soldier,” says political scientist Sarah de Lange, a professor at the University of Amsterdam. “He’s an avid social media user posting also controversial pictures of himself — lying on a piano or naked by a swimming pool.“

His party, FvD, is attracting new younger voters, but according to de Lange, his voter base is heavily male-oriented.

“For many populist, radical right-wing parties, it’s the case that males are slightly over-represented. But in the case of Forum it’s really a distinctive trait,” says De Lange. “So in some of the election polls, you would see a balance of two-thirds men versus one-third female.”

That gender disparity seems to track with some of Baudet’s sexist comments about women.

“Thierry Baudet has been an anti-feminist for over a decade. He has published a lot about what women 'really want,'” says Lievisse Adriaanse.

Derk Jan Eppink, Baudet’s party colleague and EU candidate, dismisses criticism of his leader’s anti-feminist stance. The quotes, he says, are lifted from novels written by Baudet before he got into politics.

But Baudet has made such statements in newspaper columns and on TV, saying "women generally excel less in a lot of occupations and have fewer ambitions" in a 2017 interview, adding women are "often also more interested in just more family-like things."

While Baudet may be seen as an intellectual version of Geert Wilders, his stance on immigration and flirtation with white supremacism is not too dissimilar. A Dutch newspaper recently reported that Baudet had an extended five-hour long dinner with American white supremacist Jared Taylor. Baudet did not deny the report.

“He puts himself forward as a thinker, a writer, an intellectual, a philosopher. These new voters who are drawn to him are highly educated young millennials.”

“He puts himself forward as a thinker, a writer, an intellectual, a philosopher. These new voters who are drawn to him are highly educated young millennials,” says Benali. “But they now feel left behind. They feel Brussels and Europe is taking sovereignty away from their country. Their feeling of being Dutch is under threat, because of foreigners and globalization.” 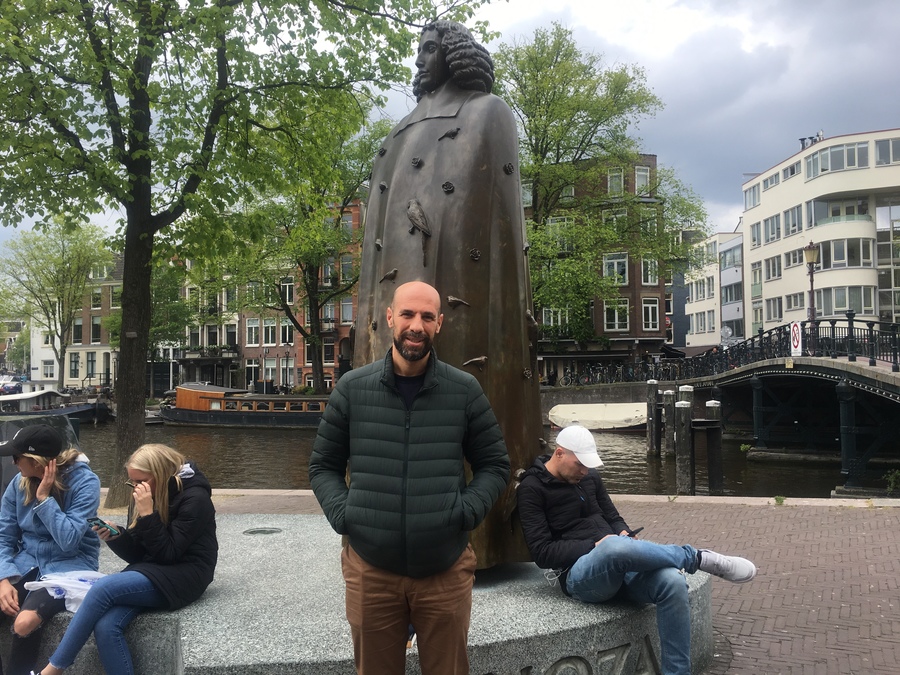 Abdelkaader Benali, a writer who emigrated from Morocco as a child, says far-right parties have created a new enemy — the European Union.

"Seeing neo-right-wing parties on the rise on the ticket of anti-Islam, anti-migration, is not something new for us now. What makes it different is that there is being brought in the anti-EU sentiment," says Benali.

Diederick van der Wijk, co-founder of the group Refugees Forward, says that one positive outcome from Baudet’s apparent success is the backlash it has spurred from other political parties and civic society. Van der Wijk, whose group helps migrants arriving in the Netherlands set up their own businesses, says politicians and members of the public are quick to react when Baudet makes comments that appear xenophobic. Van der Wijk is worried about the success of far-right parties like Forum for Democracy but believes in the long run, they won’t be able to achieve their goals.

Political scientist Sarah de Lange agrees. “While we are seeing a proliferation of right-wing parties across Europe, many of these parties have a kind of ceiling in their electoral support. So most of the parties are stuck somewhere between 15%, 20% and occasionally 25% of the vote. With a couple of exceptions to that rule. And what’s sometimes forgotten is that some of these parties are experiencing an electoral downturn at the moment because they have not been able to fulfill their campaign promises."

As far as this week's European elections, Jan Eppink tops Baudet's FvD candidate list. He says he plans to initiate change from within the European governing body. If enough Eurosceptic parties win seats in European Parliament, they plan to form alliances and vote to bring about changes in the European Union writ large.