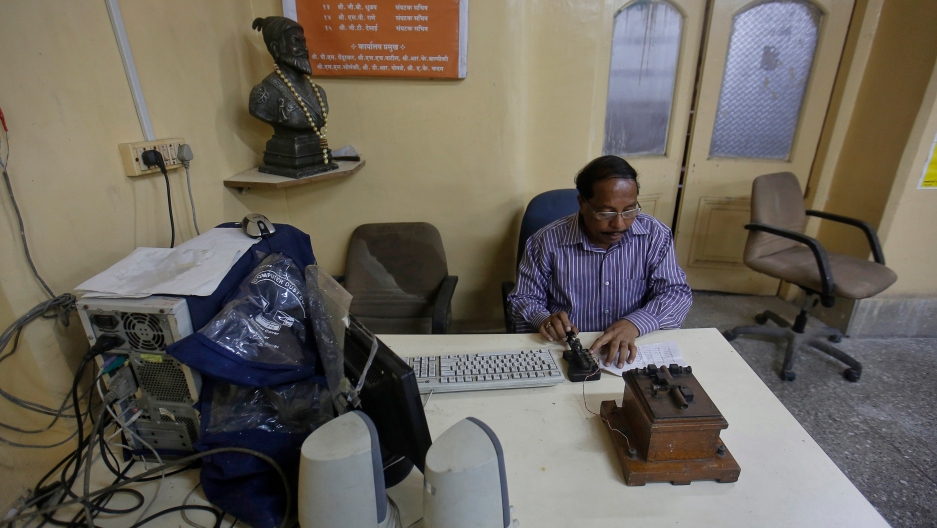 An employee poses with a Morse code telegraph machine at the Central Telegraph Office in Mumbai, July 10, 2013. On July 15, 2013, Indian authorities closed the country’s telegram service, once a fundamental part of the country’s communication system, used for everything from taking care of official business to reporting deaths and marriages. With the booming use of mobile phones and the Internet, the historic service that began over 160 years ago has now been in decline for years, and government-owned telecom operator Bharat Sanchar Nigam Ltd decided to discontinue it.

The first message sent by Morse code’s dots and dashes across a long distance traveled from Washington, DC, to Baltimore on Friday, May 24, 1844 — 175 years ago. It signaled the first time in human history that complex thoughts could be communicated at long distances almost instantaneously. Until then, people had to have face-to-face conversations; send coded messages through drums, smoke signals and semaphore systems; or read printed words.

Thanks to Samuel F.B. Morse, communication changed rapidly, and has been changing ever faster since. He invented the electric telegraph in 1832. It took six more years for him to standardize a code for communicating over telegraph wires. In 1843, Congress gave him US$30,000 to string wires between the nation’s capital and nearby Baltimore. When the line was completed, he conducted a public demonstration of long-distance communication.

Morse wasn’t the only one working to develop a means of communicating over the telegraph, but his is the one that has survived. The wires, magnets and keys used in the initial demonstration have given way to smartphones’ on-screen keyboards, but Morse code has remained fundamentally the same, and is still — perhaps surprisingly — relevant in the 21st century. Although I have learned, and relearned, it many times as a Boy Scout, an amateur radio operator and a pilot, I continue to admire it and strive to master it.

Samuel F.B. Morse’s own handwritten record of the first Morse code message ever sent, on May 24, 1844.

Morse’s key insight in constructing the code was considering how frequently each letter is used in English. The most commonly used letters have shorter symbols: “E,” which appears most often, is signified by a single “dot.” By contrast, “Z,” the least used letter in English, was signified by the much longer and more complex “dot-dot-dot (pause) dot.”

Related: The history of electronic surveillance, from Abraham Lincoln's wiretaps to Operation Shamrock

In 1865, the International Telecommunications Union changed the code to account for different character frequencies in other languages. There have been other tweaks since, but “E” is still “dot,” though “Z” is now “dash-dash-dot-dot.”

The reference to letter frequency makes for extremely efficient communications: Simple words with common letters can be transmitted very quickly. Longer words can still be sent, but they take more time. 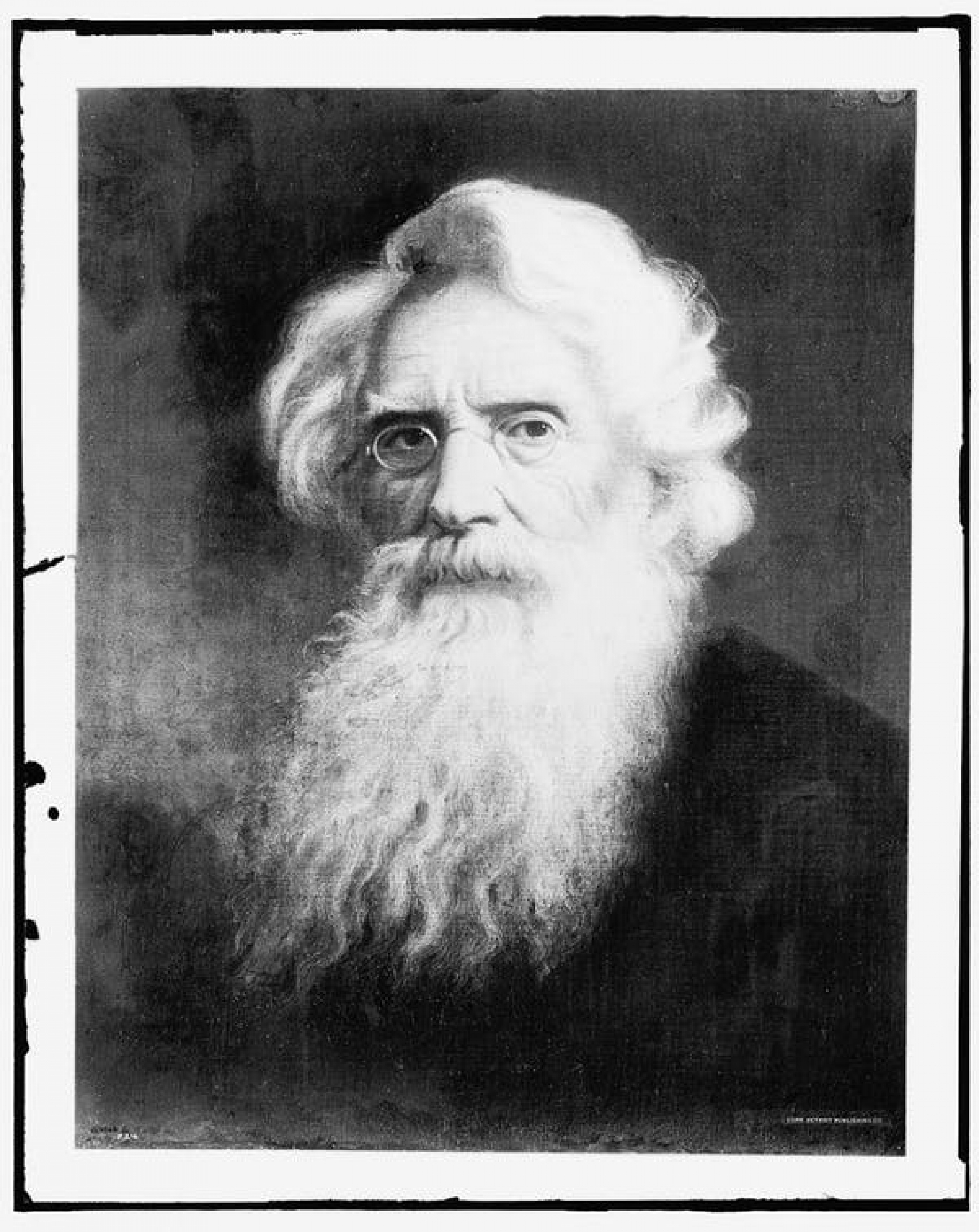 The communications system that Morse code was designed for — analog connections over metal wires that carried a lot of interference and needed a clear on-off type signal to be heard — has evolved significantly.

The first big change came just a few decades after Morse’s demonstration. In the late 19th century, Guglielmo Marconi invented radio-telegraph equipment, which could send Morse code over radio waves, rather than wires.

The shipping industry loved this new way to communicate with ships at sea, either from ship to ship or to shore-based stations. By 1910, US law required many passenger ships in US waters to carry wireless sets for sending and receiving messages.

After the Titanic sank in 1912, an international agreement required some ships to assign a person to listen for radio distress signals at all times. That same agreement designated “SOS” — “dot-dot-dot dash-dash-dash dot-dot-dot” — as the international distress signal, not as an abbreviation for anything but because it was a simple pattern that was easy to remember and transmit. The Coast Guard discontinued monitoring in 1995. The requirement that ships monitor for distress signals was removed in 1999, though the US Navy still teaches at least some sailors to read, send and receive Morse code. 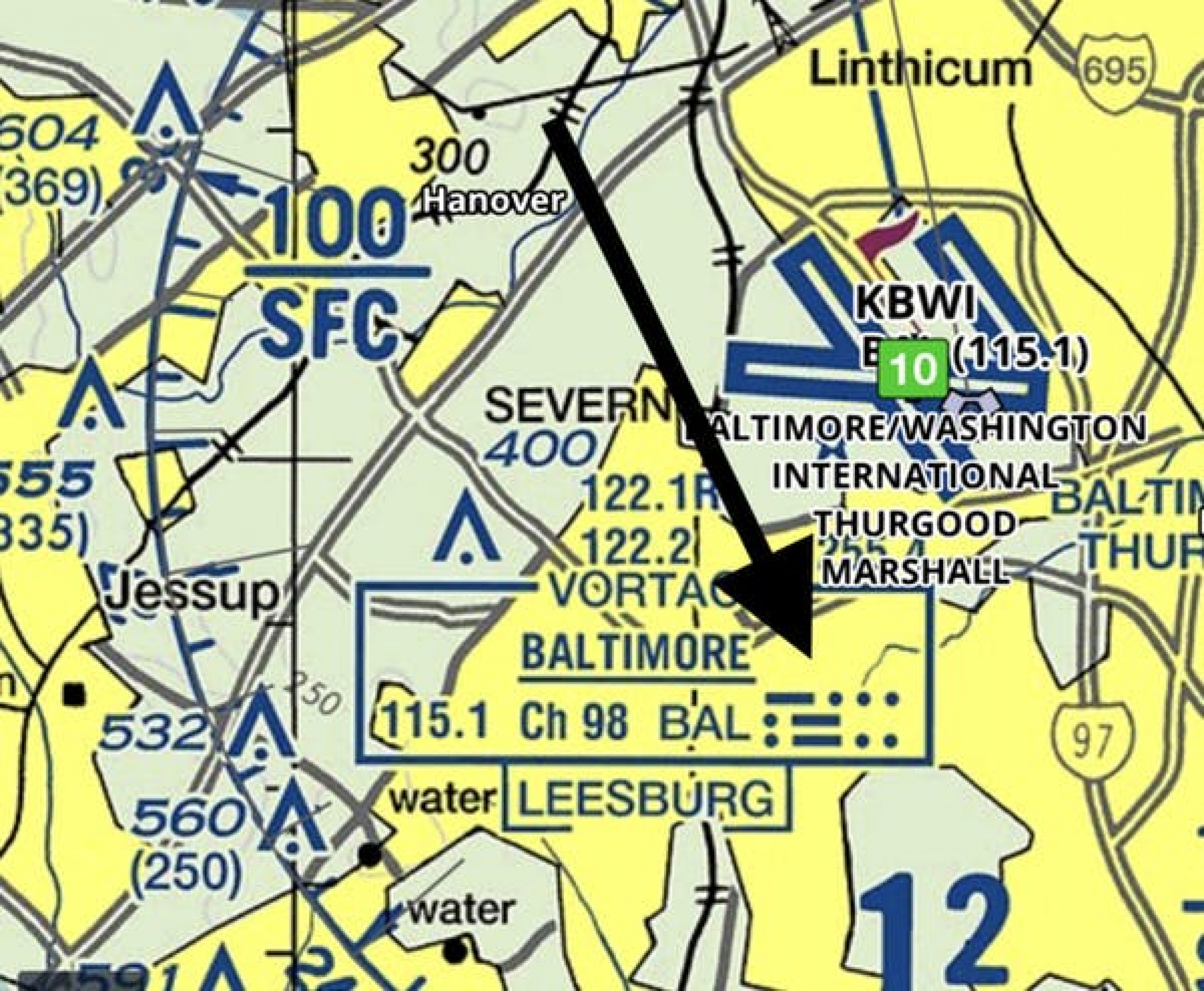 The arrow points at the chart label indicating the Morse code equivalent to the "BAL" signal for a radio beacon near Baltimore.

Aviators also use Morse code to identify automated navigational aids. These are radio beacons that help pilots follow routes, traveling from one transmitter to the next on aeronautical charts. They transmit their identifiers — such as “BAL” for Baltimore — in Morse code. Pilots often learn to recognize familiar-sounding patterns of beacons in areas they fly frequently.

Because its signals are so simple — on or off, long or short — Morse code can also be used by flashing lights. Many navies around the world use blinker lights to communicate from ship to ship when they don’t want to use radios or when radio equipment breaks down. The US Navy is actually testing a system that would let a user type words and convert it to blinker light. A receiver would read the flashes and convert it back to text.

Skills learned in the military helped an injured man communicate with his wife across a rocky beach using only his flashlight in 2017.

Perhaps the most notable modern use of Morse code was by Navy pilot Jeremiah Denton, while he was a prisoner of war in Vietnam. In 1966, about one year into a nearly eight-year imprisonment, Denton was forced by his North Vietnamese captors to participate in a video interview about his treatment. While the camera focused on his face, he blinked the Morse code symbols for “torture,” confirming for the first time US fears about the treatment of service members held captive in North Vietnam.

Blinking Morse code is slow, but has also helped people with medical conditions that prevent them from speaking or communicating in other ways. A number of devices — including iPhones and Android smartphones — can be set up to accept Morse code input from people with limited motor skills.

There are still many ways people can learn Morse code, and practice using it, even online. In emergency situations, it can be the only mode of communications that will get through. Beyond that, there is an art to Morse code, a rhythmic, musical fluidity to the sound. Sending and receiving it can have a soothing or meditative feeling, too, as the person focuses on the flow of individual characters, words and sentences. Overall, sometimes the simplest tool is all that’s needed to accomplish the task.