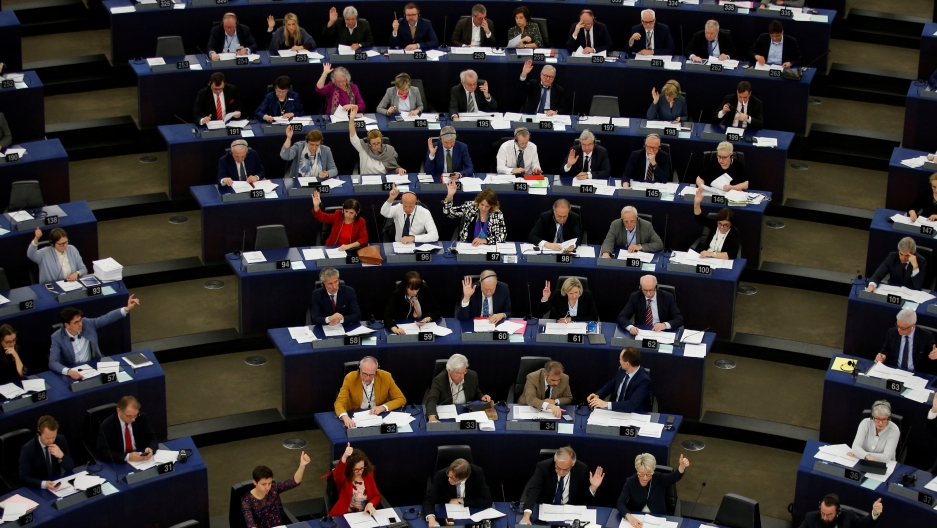 Members of the European Parliament take part in a voting session in Strasbourg, France, March 26, 2019.

Europeans will elect a new EU legislature this week. This is why the vote matters:

Who's voting and for what?

Some 427 million people in the European Union's 28 member states can vote from May 23 to 26, including nearly 50 million Britons who had been due to leave the bloc in March. Their votes for 73 lawmakers who may have to quit within weeks has upset some calculations after a delay to Brexit.

By proportional representation, Europeans will elect 751 members to the European Parliament, which divides its time between Brussels and Strasbourg. For five years, members of the European Parliament (MEPs) will pass laws proposed by the European Commission, subject to approval by national governments in the EU Council. National contingents range in size from 96 seats for Germany to the minimum six each for tiny Cyprus, Estonia, Luxembourg and Malta.

Related: How the US influenced the creation of the EU

Issues range from spending — though the EU budget is just 1% of members' gross domestic product — to climate change and labor rights. Some who want the EU broken up see it as a Brexit-style referendum on the EU's survival, pitting advocates of historic, ethnic-based nations against the idea of pooling sovereignty to defend Europe's wealth and values in a world of rising authoritarian powers and global corporations.

Caught up in this center-versus-states debate are refugees. Nationalists blame the EU for a surge in arrivals in 2015. Federalists say only cooperation can control migration. Leaders of some eastern states such as Hungary and Poland criticize Brussels over migrants and its complaints that they are undermining EU rules on democracy in Warsaw and Budapest; some westerners speak of cutting their EU subsidies in retaliation.

The election in Britain is seen by some as a new referendum on Brexit, one that could help block withdrawal — or accelerate it — as Britons go on debating how, and whether, to leave.

Are there EU political parties?

But all the groups are unruly and EU elections are mainly contested by national parties on issues familiar to voters.

Is Britain a problem?

The British vote will favor eurosceptics, Socialists and Greens — likely narrowing the gap with EPP, which has no members in Britain since the ruling Conservatives quit the group.

By taking part, Britain has forced the EU to postpone the redistribution of 27 of 73 UK seats to other countries. France, for example, will elect 79 MEPs, five more than it has now, but those five will not be able to take up their seats until after Britain leaves and parliament shrinks by 46 members to 705.

Does the winner get to run the EU?

Not really. Well, maybe. Parliament's leaders say they are the heart of European democracy. National leaders scoff at the 43% turnout in the 2014 EU elections. In practice, states wield most power and little happens that big countries dislike.

The EU executive Commission is led by Jean-Claude Juncker of Luxembourg. A historic power struggle between Parliament and the Council will get an airing after the election. Parliament has pledged to force the Council to nominate as Juncker's successor a lead candidate from a winning party. Leaders such as French President Emmanuel Macron say they will not be bound by that. Parliament could reject the Council's Commission nominee.

Related: Time for a change: EU lawmakers vote to scrap clock shifts in 2021

I'm confused. So who really runs the EU?

It's complicated. But the voting and lead candidate rumpus is part of horse-trading among governments to get compatriots or allies into top positions, not just in the Commission and Council but also in the European Central Bank.

Germany and France, the two biggest states, have the most clout, but even the smallest can play. Juncker is the third EU chief executive from little Luxembourg.

So will the elections change much?

A push by eurosceptics could mean a bigger, more cohesive minority to disrupt EU legislation. But EU optimists say a campaign that grabs more people's attention could reinvigorate post-Brexit efforts to pull the EU together.

Polls suggest the far right could increase its share but probably not by enough to sound the death knell of the EU. It seems improbable that either camp, for or against closer integration in Europe, can land a knockout blow.