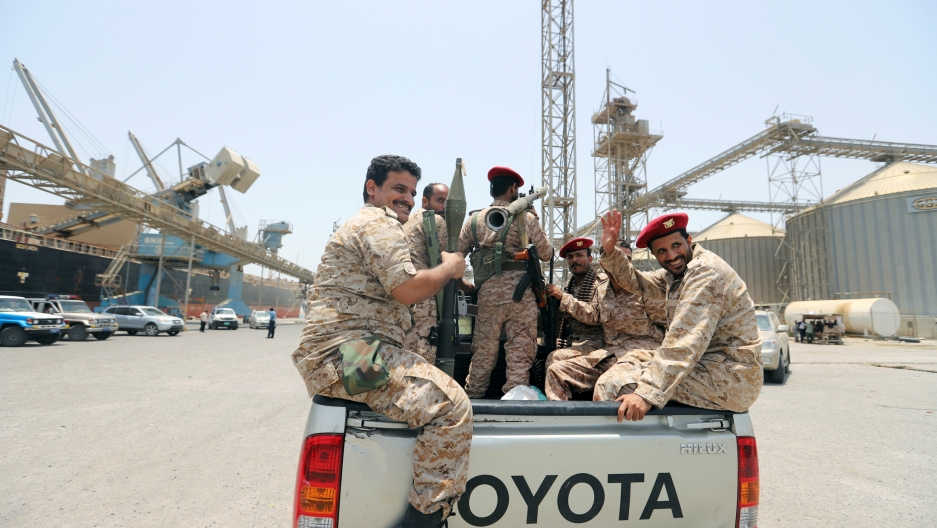 Fighters for Yemen's Houthi movement ride in the back of a vehicle during withdrawal from Saleef port in Hodeidah.

News out of Yemen was celebratory and sobering in rapid succession this week. A victory for UN diplomacy on Yemen's Red Sea coast was overshadowed the next day by a deadly air strike in the Yemeni capital, Sanaa.

"I'm very pleased to report to the Council on progress in the implementation of the Hodeidah agreement," Martin Griffiths, the UN Special Envoy to Yemen, told the UN Security Council Wednesday in New York. He had been working since December to demilitarize Hodeidah, the country's primary deepwater port. In an agreement signed in Stockholm on Dec. 13 by the warring parties, the Houthis were to make the first move in a coordinated pullback of forces. They began to move out May 11.

Related: Yemen has turned from a local conflict into a regional Cold War

The Houthis' withdrawal from three Hodeidah ports was certified by UN monitors, but Griffiths was not smiling when he faced the Security Council members.

"There are also alarming signs of the war and war has a habit of trumping peace," he said.

Those “alarming signs" came in the form of a Houthi drone attack on targets in Saudi Arabia. They took out two pumping stations on the east-west oil pipeline that carries crude from the kingdom's oil fields to the Red Sea. The Saudis retaliated on Thursday with multiple air strikes on Houthi military targets in Sanaa. Civilians, including children, were killed.

Beneath the heap, they lay buried on their back. They were screaming in agony. creeping, stumbling, dragging their feat, trying to escape from the flaming flames&the flying fragments of #Saudi bombs.
This happened to this little girl's family and she is the only survivor.#Yemen. pic.twitter.com/szWI9PAE8y

"I think the important thing about the drone strike — and the Saudi response to that — is that it's really disconnected from the conflict inside of Yemen," says Gerald Feierstein of the Middle East Institute in Washington, DC. "The strike and Saudi retaliation are really related more to the growing tensions between Iran the United States and our Gulf partners than it is about what's happening in Yemen."

The Houthis say the drone strike was in the defense of Yemen.

"We are not agents of Iran," Mohammed Ali al-Houthi, the chairman of the Supreme Revolutionary Committee of Yemen, told the BBC on Wednesday. "We are able to take this decision by ourselves. If [the Saudi-led coalition] stop their aggression and siege, we will stop our missiles and our drones."

Feierstein, who served as the US Ambassador to Yemen from 2010-2013, doesn't quite agree.

"I do think that they are responsive to Iranian direction," Feierstein says. "The fact that this particular pipeline carries Saudi oil around the Strait of Hormuz ... is evidence that, in fact, the main beneficiary of that attack is Iran — and not the Houthis."

Related: With veto, did Trump 'greenlight a failed strategy' in Yemen?

Yemeni journalist Afrah Nasser is concerned that the world is too focused on the Houthi-Iranian connection, to the exclusion of Yemenis who have endured more than four years of war.

"Yemenis fear that their lives don't matter and that the conflict is only being seen through the lens of the proxy war and that Iran has an influence in Yemen," she says. "But that's absolutely not true."

'Nobody cares about our lives'

Nasser, who edits the website Sanaa Review, says Yemenis she speaks with see little connection between the Houthi movement and Iran, and that most Yemenis are too busy with day-to-day survival to worry about regional politics.

"If you ask my family ... they keep repeating, 'Neither the Saudis or the Iranians are our friends.'  Nobody cares about our lives. And all what we are going through."

"Nobody cares about our lives."

Feierstein, based in Washington, is familiar with how policymakers view Yemen.

"I think that far too many, including members of Congress here in the United States, see Yemen only through the perspective of their views on Saudi Arabia and Saudi policy and [Saudi Crown Prince] Mohammad bin Salman, in particular, and I think that that's unfortunate," Feierstein says. "I think that the Yemen conflict is something that really needs to be understood in its own terms if we are going to help the Yemeni people arrive at some kind of a solution, a way forward."

Hisham al-Omeisy posted sharp observations about the Yemen war until he was imprisoned and tortured by the Houthis in 2017. He now lives in Cairo, but he remains deeply concerned about his country's future.

"The infrastructure in Yemen has been devastated," Omeisy wrote to The World. "The Yemeni government and the donors need to start thinking of long-term solutions that directly impact livelihoods. Rehabilitating that infrastructure. Getting systems back up, tweaking policies, governance, taxes, paying salaries. We need a strong central government and sustainable solutions, not just a weak shell where the country becomes exceedingly dependent on foreign aid that is seasonal at best and always falls short of local needs."

Feierstein says that Yemen's civil war, apart from the regional conflict, is rooted in deep inequalities.

"It revolves around issues of political disenfranchisement, economic marginalization, social issues, the tensions between various sections of the country."

And it's led to a humanitarian crisis, the world's worst.

'Suffering out of sight'

Scott Paul, humanitarian policy lead for Oxfam, says he is concerned about escalating violence across the region.

"This week we're talking about sites inside Saudi Arabia and sites in Sanaa," Paul says. "And, frankly, that's where journalists have the most access. That's where the international community's focus tends to be. But in the meantime, people across the country are suffering out of sight."

The ongoing conflict has led to a deterioration in #water and sanitation systems across #Yemen. Clean water & proper sanitation are essential in preventing #cholera. The UN estimates there are 17.8 million people in Yemen in need of help to get clean waterhttps://t.co/JVLsQUw8ht pic.twitter.com/O6yqR7BGGq

"The fact that the Houthis have withdrawn from the ports has, hopefully, laid the groundwork for the kinds of agreements going forward, that are going to increase the ability of importers to bring commodities to that port," Paul says. "In the meantime, the violence we saw in Sanaa shows what communities all over Yemen have endured."

Since the war began in 2015, fighting has killed tens of thousands of civilians, enabled cholera to spread to most regions of the country, and brought about an economic collapse that makes families so poor that they can't afford to buy enough food and cooking fuel.

"A real sustainable solution to the humanitarian crisis in Yemen is going to depend on actually stopping the fighting."

"The humanitarian community, international organizations, are doing everything that they can to try to address the problem, but it's a Band-Aid solution right now," Feierstein says. "A real sustainable solution to the humanitarian crisis in Yemen is going to depend on actually stopping the fighting."