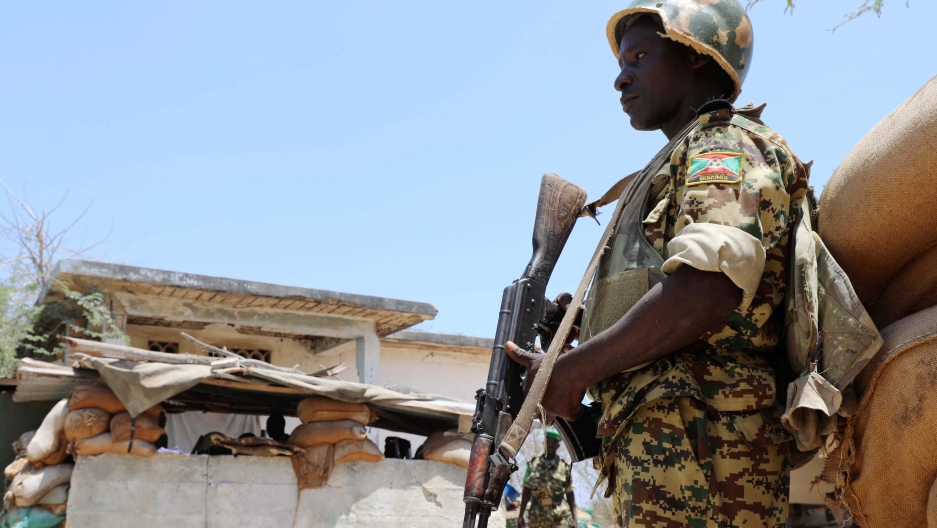 Ibrahim Hirei made a living as a driver in the Somali capital.

In March, the 31-year-old visited his family’s farm a few hours outside of Mogadishu. He spent the day there and when he was done, he and a couple of friends got in his minivan and started the drive back home.

"We could not reach Ibrahim’s phone because the phone was unavailable," recalled Ahmed Hassan Hirei, Ibrahim’s Hirei's brother. He says initially, the family wasn't too worried when Ibrahim Hirei didn’t pick up. Maybe he wasn’t getting cellphone reception, they thought.

But hours went by and there was no sign of Ibrahim Hirei, which was unusual.

"Ibrahim didn’t [stay] away at night from his home," said Ahmed Hassan Hirei, adding that his brother always made sure to be home by nightfall. That’s why he had a feeling that something might have gone wrong.

It wasn’t until 24 hours later that Ahmed Hassan Hirei's sister got a call from a stranger. Some locals had found Ibrahim Hirei's body along with what remained of his minivan. They had found a SIM card on the scene and inserted it in a cellphone. They called up the first number that showed up on the screen.

"My sister, she could not speak because she got traumatized," Ahmed Hassan Hirei said. "My sister’s husband took over the phone and gathered the information from the person."

One of the other two men in the car with Ibrahim Hirei was also killed, and the other later died in the hospital. Ahmed Hassan Hirei believes they were killed in an American airstrike. He suspects this because, he says, the US has been carrying out airstrikes in Somalia.

The next day, the US military command in Africa issued a press release stating that the airstrike was aimed at al-Shabab terrorists in the region. It went on to say: "we are aware of reports alleging civilian casualties resulting from this airstrike. As with any allegation of civilian casualties we receive, U.S. Africa Command will review any information it has about the incident, including any relevant information provided by third parties."

Ahmed Hassan Hirei says he hasn't heard from American officials and that his brother was not a terrorist.

"He never ever [was] involved with jihadist activities. ... He didn’t [even] take a gun during his life."

"He never ever [was] involved with jihadist activities," he said. "He didn’t [even] take a gun during his life."

"The US government is a big government," Ahmed Hassan Hirei said. "And I believe it is where the democracy and humanity come from. And we are requesting to investigate that he was innocent, and he was killed while he was doing his day-to-day business."

And he hopes an investigation might also lead to compensation for his loss.

US inconsistent in condolence payments

In the past two decades, the US has fought in many conflicts around the globe — such as in Iraq, Afghanistan and Syria. Throughout the years, the US has been inconsistent when it comes to counting civilian deaths and compensating survivors.

"It’s something that really evolved on the ground in response to the conflicts in Iraq and Afghanistan," said Erica Gaston, a human rights lawyer who has researched the impact of war on civilians.

Gaston says when the US invaded Afghanistan and Iraq in the early 2000s, it didn’t have a standard policy on compensating survivors. There was one law in the books, the Foreign Claims Act from 1942. But that didn’t cover civilians who were killed in combat.

"So, most of the civilian casualties you’re looking at in Iraq and Afghanistan, the Foreign Claims Act is not available for most of them," Gaston said.

Other countries in the coalition weren't doing any better. Gaston remembers one time when she visited German troops in northern Afghanistan.

"They had had an incident at a checkpoint where a civilian family was killed, and all the soldiers passed around a hat to collect money," she said.

Gaston says that often when soldiers witnessed innocent Afghans caught up in the fighting, they were moved and tried to help. Meanwhile, activists scrambled to draw attention to civilian deaths.

Marla Ruzicka was one of those activists. She was in her 20s when she left California for Iraq. In 2003, she founded CIVIC, the Campaign for Innocent Victims in Conflict. But her time in Iraq was cut short. Ruzicka was killed by a roadside bomb on her way to the Baghdad International Airport.

"In war, innocent civilians should not be hurt. It happens," she said in a video that was made by CIVIC after her death. "Now, we have to see what you do to help the families."

Gaston, who worked for CIVIC in Afghanistan, says Ruzicka’s activism, as well as pressure from human rights groups, led to a shift in US policy. American military commanders got access to funds that they could use as "condolence payments" in Afghanistan.

"Initially, that coalesces to where you start to get these payments on the ground," Gaston said.

The US government paid for damages to farms and homes and even for sheep or goats that were killed as a result of American airstrikes in the country. This was part of the strategy known as winning hearts and minds. The process wasn’t perfect, Gaston says, but it seemed to be making a difference.

"Every family has their own personal experience with grief and loss, but in general, in Afghanistan it’s considered a sign of respect."

"Every family has their own personal experience with grief and loss but, in general, in Afghanistan it’s considered a sign of respect," Gaston said.

Recently, the US military has relied more on drones and airstrikes, such as in the campaign against ISIS in Syria.

"On the front end, there is the problem of discovering the harm because you don't have troops on the ground, and you may not have relationships with local groups to the point where you can get greater fidelity on what happened," he said. "And the second challenge is that once you do have a sense of what happened, how do you reach those survivors to do something about it?"

Other human rights groups have pointed out similar concerns.

"There’s a limited amount you can see from the air," said Daphne Eviatar, director of the Security with Human Rights Programs at Amnesty International. "You can see a person. You can see a building. If you bomb a building, you can’t see who is inside of it."

In Raqqa, Syria, Amnesty International estimates that more than 1,600 civilians were killed due to coalition airstrikes and artillery in just four months in 2017.

The latest Pentagon report, on the other hand, says that about 800 civilians were killed in Iraq and Syria during its fight to uproot ISIS in 2017.

Related: Pentagon's civilian death count was off by a factor of 10

Last October, a Pentagon spokesman told reporters that the US takes civilian casualties in Syria seriously, but it doesn’t have the manpower there to conduct investigations on the ground.

"There needs to be an acknowledgment and a reckoning of what the US did there. And I’m not trying to attribute bad motive to the United States. The United States was trying to get rid of a brutal terrorist group. But the way they do that matters. And the impact on civilians and people who live there really matters."

"There needs to be an acknowledgment and a reckoning of what the US did there," she said. "And I’m not trying to attribute bad motive to the United States. The United States was trying to get rid of a brutal terrorist group. But the way they do that matters. And the impact on civilians and people who live there really matters."

The US-led campaign against ISIS in Syria might be winding down, but US airstrikes in Somalia have tripled since President Donald Trump took office.

Related: Somali torture victim will face his abuser after 31 years — in US court

Last month, Amnesty International accused the US of possible war crimes in the country.

The US Africa Command added that it has not compensated any Somali citizens as a result of an airstrike.

Meanwhile, Ahmed Hassan Hirei says American officials have not contacted him about his brother's death.

He says his sister-in-law has been struggling since her husband died.

"She was not feeling well, but we, as a family, are consoling to her," Ahmed Hassan Hirei. "She’s made improvements, but I don’t think she will forget her loved one."

Ahmed Hassan Hirei wishes the US would do more to distinguish between extremist groups like al-Shabab and innocent people like his brother.