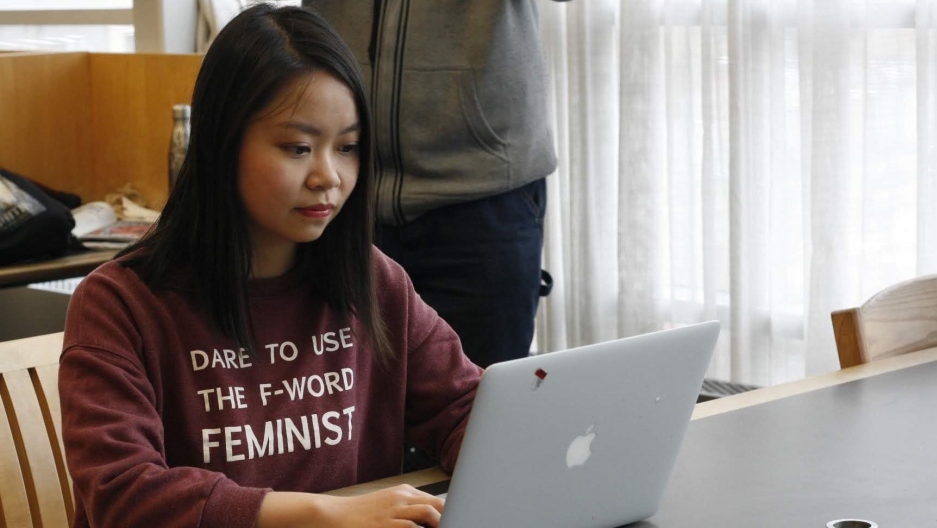 After Chinese security agents tried to dissuade her activism, Xiaowen Liang moved to the US. Now, she works on raising awareness of China's women's movement with other Chinese feminists living abroad.

During her college years in China, Xiaowen Liang demonstrated for more women’s public bathrooms and shaved her head to protest school admission policies that favored men. On her graduation day in 2012, police showed up on campus to question her about the campaigns. They asked her to reconsider her activities, which they said had been influenced by “hostile Western forces.”

Liang, who already knew she was being monitored by authorities, saw it as another example of the government’s ongoing efforts to silence feminists. Her family felt it was further proof she needed to immediately give up her activism. So Liang decided to leave China. She applied to graduate programs in New York and, when the US granted her a visa, she moved overseas in 2016.

But Liang, 26, didn’t forsake China. She knew other Chinese feminists who were already in New York — they introduced her to others in cities across the US. Now, her goal is to build a bridge for information about the women’s movement in and out of China.

“Because of censorship, not a lot of people know about feminism activism in China. We want to let the world know that there are people fighting against the government.”

“Because of censorship, not a lot of people know about feminism activism in China,” she said. “We want to let the world know that there are people fighting against the government.”

While China’s government has cracked down on women’s rights activists through censorship, arrests and evictions, an informal network of Chinese citizens living abroad are working to support their efforts to combat sexual harassment and inequality back home. They want to bring the stories of activists and other women in China to international audiences.

The movement Liang is a part of has had a broad reach: In an interview on the Netflix show "Patriot Act," Liang told host Hasan Minhaj about the time security agents showed up to her home with her father’s boss to pressure her into canceling a seminar on women’s rights.

In the US, Liang works closely with several dozen other Chinese feminist activists to coordinate talks and other events to raise awareness of the movement. In March, Liang and her colleagues held a Chinese Feminist Wikipedia Edit-a-Thon in New York City. People brought their laptops and edited and translated both existing articles and new posts on the topic of Chinese feminism. "We are racing against the censors in documenting feminist’s [sic] effort. Therefore, we hope to document as much grassroots feminist activism as possible," the event listing says.

Others in the group curated a traveling photography exhibit showing Chinese activists laying on streets and protesting in bloody wedding dresses. They also put on a play called “Our Vaginas, Ourselves,” which ran at a theater in New York's Times Square in 2017. The show was about the struggles of feminist activists and has traveled to 10 universities in the US and Taiwan. 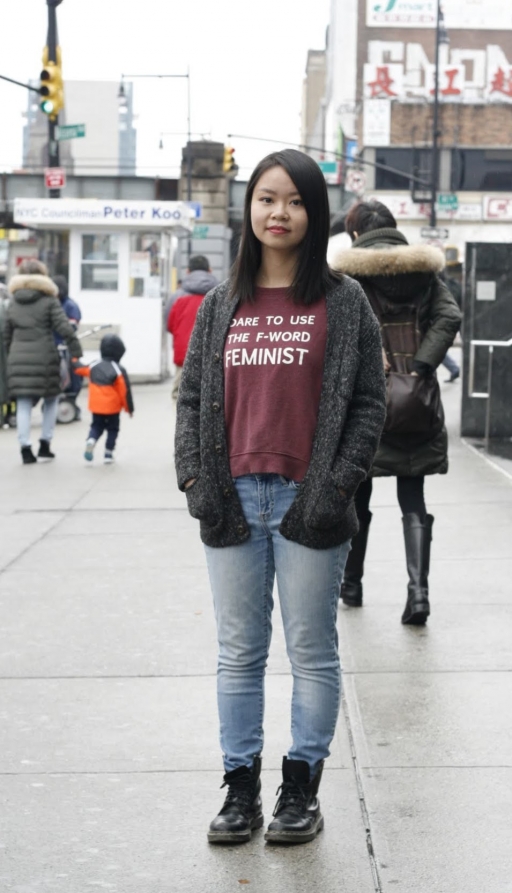 Xiaowen Liang's goal is to build a bridge for information about the women’s movement in and out of China.

One Sunday morning this past winter, about 30 women met in New York City for a Mandarin-language workshop on feminism led by Lü Pin, one of China’s leading women’s rights advocates. Most were in their 20s and had grown up in China before coming to the US to study and work. They were there to meet other Chinese feminists and learn about how activists in China are trying to change the status quo.

Speaking via video chat, one activist told the participants that she is studying psychology in hopes of becoming a counselor for survivors of sexual assault, who have few resources for support.

“Sometimes, I feel powerless when I think about women’s situation in China,” said Nico, a college student who attended the workshop and did not want to give her last name for fear of political risk and pressure on her family members. “But we do what we can in daily life and hopefully change the situation incrementally.”

Nico took a train from Canada to Washington, DC, for the event. She said she was motivated to get involved in political organizing after friends from China confided that they had experienced sexual assault and domestic violence.

She said that she has been talking about women’s issues with friends more often, and plans to hold her own workshop at school on speaking out about sexual assault.

Security agents and censors have attempted to muffle women who speak out against the country’s male-dominated culture — or what activists have dubbed “straight man cancer.” Luo Xixi, a Chinese software engineer living in California, sparked China’s #MeToo movement after sharing her story of being sexually assaulted by her former doctoral thesis adviser at Beihang University in Beijing. She wrote in her post that she was inspired by the #MeToo movement happening in the US. Waves of women in China subsequently shared their #MeToo stories on social media, accusing academics, media personalities and activists of sexual assault, but the government responded by blocking the hashtag.

“Our government is very, very strong, so we have to create new spaces to resist.”

“Our government is very, very strong, so we have to create new spaces to resist,” said Lü, who moved to the US four years ago and is now a graduate student studying political science in Albany, New York.

Before that, Lü spent decades in Beijing promoting gender equality in the media, despite the government's claims that she and other Chinese feminist activists were colluding with “hostile Western forces.” She said that her experiences as a journalist at the state-run newspaper China Women's News spurred her activism.

Read also: I didn’t know how big a problem sexual harassment was in China — until #MeToo

“This is a homegrown movement organized by Chinese women, and it’s just that because of the intense crackdown on activities inside China, they do have much more freedom to organize and to speak out from places like the US,” said Leta Hong Fincher, the author of “Betraying Big Brother: The Feminist Awakening in China.”

Lü, 47, never intended to relocate. In March 2015, she traveled to New York City to represent her organization at a meeting on women’s rights at the United Nations. While she was there, police in China detained five of her colleagues over their plans to hand out anti-harassment stickers on public transportation in Beijing, Guangzhou and Hangzhou. When she heard that the police had also visited her Beijing apartment, she decided to stay in New York. She rallied support on social media for her colleagues, who became known as the “Feminist Five.”

Lü has continued her work since authorities freed the Feminist Five, amid intense diplomatic pressure. From her home in Albany, she messages back and forth with feminist activists in China every day, and writes and shares English-language articles about the women’s movement under the social media handle Free Chinese Feminists. Other volunteers pitch in remotely with writing, translating and posting.

Lü also connects Western journalists to feminists in China, where Facebook is blocked.

“It’s important so people can know what it is happening in China; they can hear the voice of Chinese activists directly.”

“We want to tell firsthand information to English-speaking audiences,” Lü said. “It’s important so people can know what it is happening in China; they can hear the voice of Chinese activists directly.”

In January 2017, Liang traveled to Washington, DC, and joined other Chinese feminists at the Women’s March. China’s government had banned news outlets and websites from covering the march altogether. So, the women shared pictures and videos of themselves carrying signs like "Nasty Chinese Women Say No" and "We Demand Feminist World Leaders" in an online group with over 1,000 people on WeChat.

Liang said that some people in China — where “you’re taught that demonstrating is bad” — told her that the march was revelatory. “It not only gave them inspiration about women’s rights, but how women can get together and be angry, and also that public demonstration is not bad,” she said. “It’s a lot of people getting together; it’s powerful.”

Despite being able to protest and speak more freely in the US, however, many overseas Chinese women say that their fear of retribution hasn’t disappeared upon leaving China.

“I have to think very carefully before I speak up,” said Nico, who grew up in Beijing and is now a Canadian citizen. “I do this for my family members who are in China.”

Meanwhile, the Chinese government has continued to tighten its grip on feminist activists in the country. Last month, it shuttered the Guangzhou Gender and Sexuality Education Center, an NGO that promoted gender equality, for being a "suspected illegal social organization" — as part of President Xi Jinping’s ongoing crackdown on civil society.

Lü has seen feminist activists adapt to tougher conditions — for example, followers of the Feminist Voices’ social media account started their own chat groups after it went dark — and she believes that their continued efforts and the rise of Me Too under the crackdown are signs that the movement isn’t going away anytime soon.

“Now, there are not many feminist organizations, but the feminist community is very, very active, so the situation is special,” she said. “The feminist movement can still be very powerful.”

Correction: An earlier version of this story incorrectly referenced a name in subsequent references.