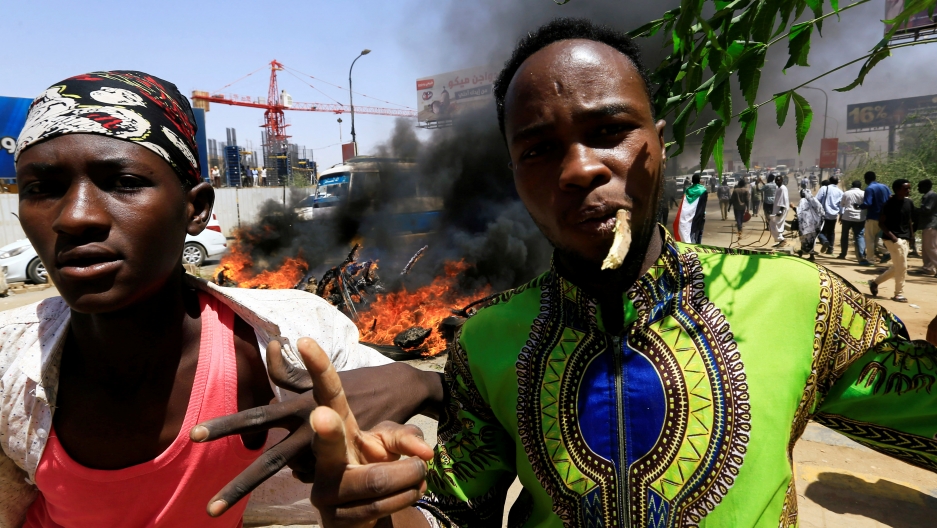 Sudanese protesters gesture as they burn tires and barricade the road leading to al-Mek Nimir Bridge crossing over Blue Nile that links Khartoum North and Khartoum, in Sudan May 13, 2019.

Sudan's military rulers and an alliance of protesters and opposition groups were set to meet on Wednesday to hash out the details of a sovereign council designed to steer the country towards democracy during a three-year transition.

The Transitional Military Council (TMC), which took over after overthrowing and jailing veteran President Omar al-Bashir on April 11, has been holding intermittent talks with the opposition Declaration of Freedom and Change Forces (DFCF) for several weeks.

Early on Wednesday, they announced a deal on the composition of a legislative council and the duration of the transition. But they said they would continue talks on the key sticking point of the make-up of the sovereign ruling council.

Both sides expressed optimism that they could reach a final deal, with talks expected to resume on Wednesday evening.

Protesters pushing for a civilian-led transition and for security forces to be held to account for the deaths of demonstrators have remained in the streets, however.

Some expressed caution over the prospects for an agreement that would satisfy their demands.

"We are still sticking to our plan. The barriers are there and they are not moving until our demands are met."

"We are still sticking to our plan," said Altaj Blah, a protester in central Khartoum. "The barriers are there and they are not moving until our demands are met."

The two sides announced in the early hours of Wednesday that the transition would last three years — a compromise between the TMC's proposal of two years and the DFCF's preference for four.

The TMC said the DFCF would have two-thirds of the seats on a transitional legislative council while parties outside the alliance would take the rest. Free elections would be held at the end of the three-year transition.

A final deal on the composition of the sovereign council will be reached within 24 hours, according to the TMC.

"The viewpoints are close and, God willing, we will reach an agreement soon."

Satea al-Hajj, a DFCF member, said: "The viewpoints are close and, God willing, we will reach an agreement soon."

On Monday after security forces tried to clear some protest sites, an outburst of violence left at least four people dead, including three protesters and a military police officer. They were the first deaths linked to the protests for several weeks.

DFCF members blamed security and paramilitary forces, while also voicing suspicions that groups linked to Bashir might be fomenting unrest to undermine the chances of a political accord.

The ouster of Bashir, who seized power in a military coup 30 years ago, came after 16 weeks of demonstrations triggered by a worsening economic crisis under his increasingly repressive rule, with many people also angry over corruption and cronyism.

Related: How Sudan’s protesters upped the ante and forced al-Bashir from power

Demonstrators have been camped at a sit-in outside the Defence Ministry since April 6. On Tuesday, the sit-in area and eastern Khartoum were blocked off from the capital's centre by barriers erected by protesters.

Some roads in the centre have been blocked with stones, bricks, branches and slabs of concrete that security and paramilitary forces have occasionally tried to clear.

Related: How Sudan’s uprising is inspiring a generation of Sudanese American teens

One group of protesters argued with soldiers on Wednesday as they tried to reinstall barricades just south of the al-Mek Nimir bridge over the Blue Nile river. The protesters chanted, "No going back, we have demands."

The outcome of the dispute was not immediately clear. But in past such cases, protesters put their barricades back up after security forces leave the area.