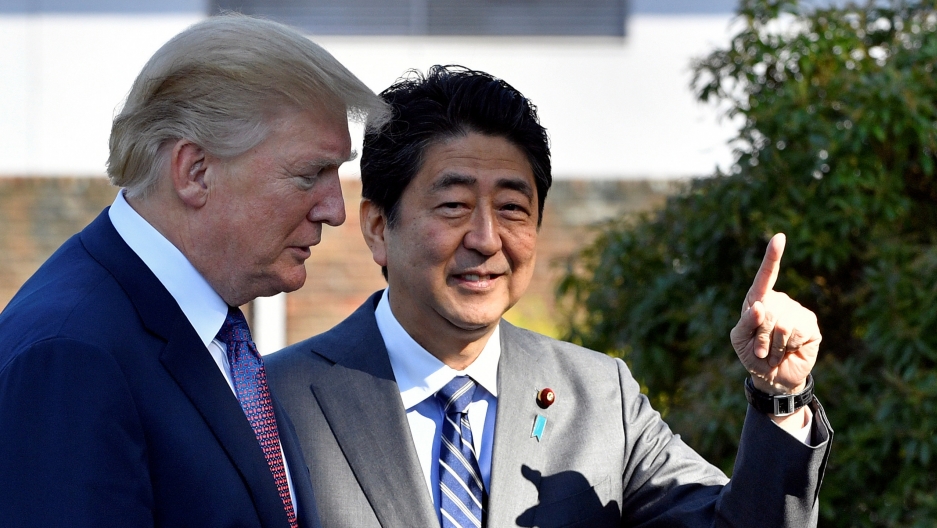 President Donald Trump is welcomed by Japan's Prime Minister Shinzo Abe upon his arrival at the Kasumigaseki Country Club in Kawagoe, near Tokyo, Japan, Nov. 5, 2017.

On May 3, North Korea, a nuclear power, launched short-range missiles off its east coast, uncomfortably close to neighboring Japan. It is not the first time North Korea has shot ballistic missiles over, near or into Japanese territory in recent years.

After the most recent test, Prime Minister Shinzo Abe called US President Donald Trump — whom he had recently visited in Washington for trade talks — to discuss his intent to meet with North Korean leader Kim Jong-un for “unconditional” denuclearization talks.

While Prime Minister Abe has refused to clarify his reasoning for the nomination, a Feb. 17 article in Japan’s Asahi newspaper reported that the US asked Japan to put Trump’s name forward. Trump has confirmed that Abe nominated him in a “beautiful” five-page letter.

Other world leaders might have turned down that request. But Abe needs US support to achieve many economic, political and foreign policy goals. From my perspective as a Kyoto-based scholar of Japanese politics, nominating Trump for a Nobel Peace Prize is, for Abe, more sensible than it might seem.

Trump’s unexpected decision last year to engage in discussions with Kim aligns much more closely with the diplomatic goals of China and South Korea — which say their goal is maintaining stability in the Asia region — than with Japan, which has taken a hardline stance against the North Korean regime.

Well before taking office as prime minister in 2012, Abe has demanded nothing less from North Korea than “denuclearization for peace.”

That was the US position before Trump’s recent rapprochement, too. So Trump’s diplomatic approach to North Korea has basically left Japan out in the cold.

Beyond wanting to protect Japan from North Korean military aggression, Abe has another big demand for the Kim regime. He hopes to force North Korea to return the remaining 12 Japanese citizens believed to have been abducted by North Korea between 1977 and 1983.

Related: Japan could ease tensions with North Korea — if North Korea comes clean on its abduction of Japanese citizens

In 2002, North Korea officially admitted to abducting 13 Japanese citizens and, in an effort to restore good faith with Japan, agreed to return five of them temporarily — provided they were forced to return to North Korea.

However, Abe, who was then deputy prime minister, ensured that the detained Japanese citizens never went back, breaking his government’s agreement with North Korea. Ever since, North Korea has either denied that it still is detaining the remaining Japanese prisoners or claims that those in North Korea have since died.

Abe assumes they are alive and is eager to get them back — and show to his electorate he has the clout to do so.

This is where Trump comes in.

Trump’s dialogue with Kim Jong-un, which may be restored in a third US-North Korea summit, could give Japan the opportunity to push its case. To get Trump to put it high up on the negotiating agenda, Abe needs to be on the US president’s good side.

A good working relationship with the United States is essential for Abe to realize his other ambitions, too.

Japan, once the world’s second-largest economy, has an aging population and entrenched deflation. Abe has a domestic economic strategy — dubbed “Abenomics” — to spur revitalization, but the United States, as Japan’s largest trade surplus partner, is critical to keeping the Japanese economy afloat.

Trump has made numerous statements regarding “unfair Japanese trade practices” that endanger this trade relationship. His administration already levied tariffs on Japanese steel and aluminum and has threatened to tax Japanese automobiles, too.

For Abe to succeed in office, economic growth is key. Public approval for his government is flagging, having fallen to 39% in March.

So Abe desperately needs to stay in the good graces of the United States, which means, right now, getting on the good side of Donald Trump.

Alignment with the US may also help Abe convince voters to approve a controversial change to Japan’s post-World War II Constitution his administration has pushed since 2012.

Abe wants to amend the Japanese Constitution, which was drafted by the United States to prohibit the defeated country from having a standing army, to strengthen Japan’s domestic security forces. Trump has encouraged Japan to remilitarize, citing its need to protect itself from North Korea.

But critics in Japan say the new draft Constitution gives far too much power to the prime minister’s office, and public support for amending the Constitution appears low.

Abe’s effort to expand Japan’s military role may have something to do with North Korea. But the prime minister also wants to raise Japan’s profile as a global power.

He has, for example, argued vehemently for it to become a permanent member of the United Nations Security Council — a move that would put Japan on equal footing with its powerhouse neighbor, China.

Recognizing how many of his political goals depend on an unpredictable US president, Abe has worked hard to foster amicable relations with Trump. He has played frequent rounds of golf with the US leader, invited him to meet the country’s new emperor — and, yes, even nominated him for a Nobel Peace Prize.

Chris G. Pope is a researcher at Kyoto Women's University.