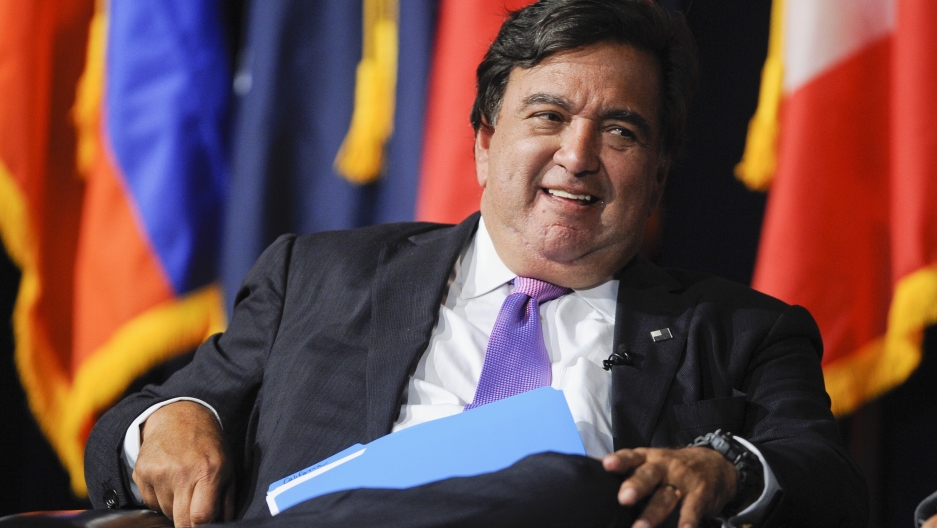 Today in Myanmar, two Reuters journalists are enjoying time with their families days after their release from prison. Wa Lone and Kyaw Soe Oo served more than 500 days in jail after they were arrested for violating the country's Official Secrets Act when they uncovered details around the killings of 10 Rohingya men and boys.

Myanmar's civilian leader, Nobel Peace Prize winner Aung San Suu Kyi, was one of the biggest obstacles to winning the release of Wa Lone and Kyaw Soe Oo, according to former UN Ambassador and New Mexico Gov. Bill Richardson. He spoke to Marco Werman about his meetings with Aung San Suu Kyi and his attempts to negotiate the freedom of these journalists.

Marco Werman: Ambassador Richardson, you served on a panel looking into solutions to the Rohingya crisis in Myanmar and you considered Aung San Suu Kyi a colleague and a friend. What happened when you approached her about releasing Wa Lone and Kyaw Soe Oo?

Bill Richardson: Aung San Suu Kyi exploded at me after I asked her. I said, "We've got a new panel that you've named to improve the image of Myanmar. Release these two journalists. They uncovered mass graves that are giving your country a very bad name." She exploded. I thought that if we were any closer, she was going to slap me. Then I knew that the best thing to do would be to resign from the panel that, in my judgment, was just going to whitewash all of the crimes committed against the Rohingya and make it very difficult for these two heroic journalists not just to do their job, but to be released.

We spoke last year after this incident and now, of course, Wa Lone and Kyaw Soe Oo are out of jail after 500 days. What was Aung San Suu Kyi's rationale when you spoke with her? She's a former political prisoner herself and a Nobel Peace Prize winner for her work around human rights.

I had backed her for 20 years as a public official. I think what happened was she got infatuated with her power, with the fact that she was president and the fact that she felt she needed the support of the military. She lost her conscience, and I deeply regretted that because she was a political prisoner herself and she said that these journalists are committing security secrecy crimes, which was totally false. There was a real regret on my part to resign because it obviously broke our relationship.

Aside from the fact that Aung San Suu Kyi was a political prisoner herself, spoke fervently about human rights and won a Nobel Peace Prize for that, what signs were there back in the day that her moral compass might someday go astray?

The fact that she didn't tolerate criticism. It was obvious that this advisory panel she named was just to buttress what the Myanmar government was doing against the Rohingya: not giving them citizenship protection and committing massive human rights violations. I wasn't going to be part of that. The first incident that I saw this was when I opened the advisory committee meeting with her by saying, "To start, you might release the Reuters journalists. They're just doing their job. It's giving you a bad name." She lashed out at me saying, "This is all wrong. You are wrong. This is not your charter." That's when I knew that our charter was going to be whitewashing what she wanted, and I wasn't going to be a part of it. I don't think she deserves credit for releasing the two journalists. I think it was the enormous public pressure, and maybe the military itself realized that this was a big problem for the Myanmar government. My information is that she resisted their release until the very end. She finally did it, but under enormous pressure. I'm not applauding the release of the journalists by Aung San Suu Kyi. It was international pressure.

How do you process the release of Wa Lone and Kyaw Soe Oo in terms of Myanmar's democracy? Do you see this as a new opening that diplomats in the West might pursue and would you encourage that given your current feelings about Aung San Suu Kyi?

I think that the judicial process would not release the two journalists; it took presidential pardon. Maybe there is a positive sign that, as the elections near in Myanmar, that Aung San Suu Kyi realizes they cannot continue these massive human rights violations, especially jailing journalists. There are a lot of other political prisoners and other journalists that are in jail today that deserve to go out.

Do you think this is a cautionary tale for US diplomats on whom they choose to ally themselves with and the pursuit of democracy?

This is a cautionary tale for US diplomats and all diplomats. Just don't believe press releases, Aung San Suu Kyi is a perfect example. She was a champion of human rights, but once she got power, she felt that she could abuse human rights to retain that power and retain the support of the military. She tries to justify her actions, which have been cruel in terms of the Rohingya people, but also in terms of freedom of the press and democratic principles that she used to stand for.