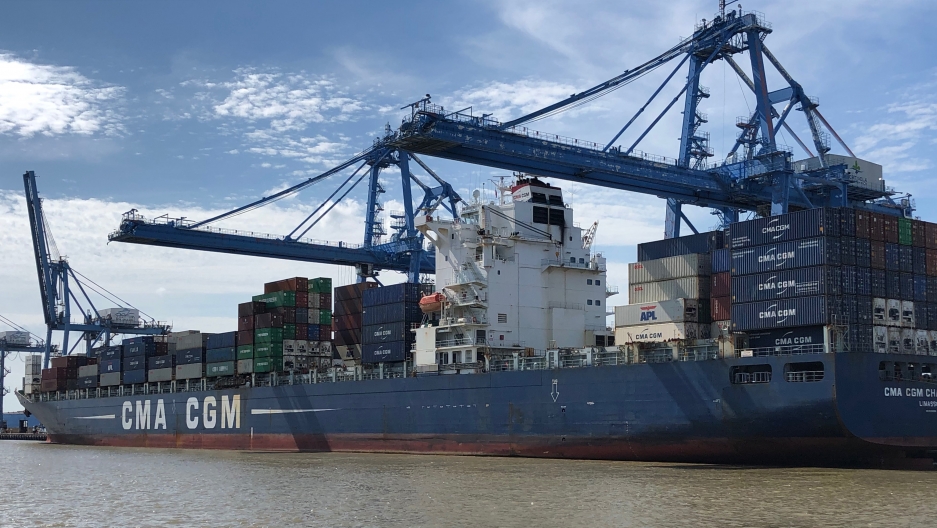 A container ship at the port of New Orleans. China is the US’ largest trading partner — the US imported $540 billion worth of goods from China last year.

Just last week, it looked like Washington and Beijing were close to a deal. But one minute after the stroke of midnight early Friday, the Trump administration raised tariff rates from 10% to 25% on $200 billion worth of Chinese imports. The president said, via tweet, "Tariffs will make our country much stronger, not weaker."

Tariffs will make our Country MUCH STRONGER, not weaker. Just sit back and watch! In the meantime, China should not renegotiate deals with the U.S. at the last minute. This is not the Obama Administration, or the Administration of Sleepy Joe, who let China get away with “murder!”

“We were getting very close to a deal, then they started to renegotiate the deal. We can’t have that,” Trump said Thursday.

Trump has been trying to decrease the US-China trade deficit and also get China to cut back on state subsidies. The Trump administration is also tackling long-standing issues, like the forced transfer of technology for American companies that want to do business in China.

The president also repeated a claim Thursday, one he often makes, about who is paying these increased import taxes: “Paid for mostly by China, by the way, not by us. A lot of people try and steer it in a different direction. It’s really paid, ultimately, it’s paid for largely by China.”

The latest academic research disputes that.

“What we found is that the tariffs are passed on completely to US consumers.”

“What we found is that the tariffs are passed on completely to US consumers,” said economist David Weinstein at Columbia University.

He and other economists found that when the initial 10% tax was added to Chinese-imported roof tiles, golf bags, soap, baseball gloves or thousands of other items … American consumers ended up paying for it.

Chinese firms had a decision to make: try to preserve market share and lower prices on exports, effectively absorbing the costs of the US tariffs, or pass along the costs of import duties to US buyers of Chinese-made products.

With American consumers stuck holding the bill, it's left small-business owners like John Hoge in a bind. Hoge is a co-owner of Sea Eagle Boats, a family-run business on Long Island, New York, that designs and sells hard plastic, inflatable boats and kayaks. Most are built in China.

When Hoge’s imports from China were hit with the 10% tariff at the border, he raised his prices. And sales dropped. Hoge said tariffs “seem to be affecting” business, but also that it’s been a cold, wet spring, which could be impacting matters. Still, he said that a 25% tariff will be “terrible.”

“We will lose a lot of profit, and we will have to cut costs,” said Hoge. “I think what’s going to happen is that the effect on the consumer will result in a shift of priorities, that if the necessities of daily life get 25% more expensive, then there will be less of a tendency to put money into recreational items like the boats we’re selling.”

Worst case: Hoge said he might have to layoff some of his 28 employees.

Then, there’s the other side of the trade equation, from the American perspective at least: businesses trying to export to China. When the Trump administration put tariffs on Chinese imports, Beijing did what all nations do in a trade war — they retaliated with tariffs of their own, particularly aimed at US farmers.

Soybean farmers like Earl Williams in Cherry Valley, Illinois, the nation's largest soy-producing state, were effectively shut out of China, their largest export market. With increased supply and less demand, the price of soybeans plummeted.

“I think most grain producers are saying there’s no profit," said Williams. "How bad are the losses going to be at these prices?"

Williams said he’s being hit with a double whammy. He can’t export his soybeans to China and import tariffs on steel are adding to his costs as a consumer. “We use a lot of machinery, grain bins, buildings that use steel coatings. Those are a direct hit to my pocketbook.”

Williams is frustrated with the president and said tariffs applied unilaterally on China are the wrong way to settle trade disputes.

“You never win ... You lose markets that took a lifetime to develop. And there aren’t that many options to replace a market such as the Chinese demand for our soybeans.”

“You never win,” said Williams. “You lose markets that took a lifetime to develop. And there aren’t that many options to replace a market such as the Chinese demand for our soybeans.”

There is one sliver of good news for people and businesses being impacted by the US-China trade war: The new tariff hike doesn’t apply to Chinese imports that are already in transit and out on container ships.

American companies also pay the duties at the US port of entry, and that buys people like boat seller John Hoge a little bit of time.

“We don’t have any orders shipping in the next few days, and it takes about a month to get over, so it will start to bite in about six to eight weeks,” Hoge said. “But I’m confident that there will be a deal before that.”

On the whole, Hoge worries that we’ve forgotten that trade is “fundamentally an act of cooperation and fundamentally mutually beneficial … Whatever things that need to be fixed about the system, we shouldn’t tear down the entire system to tweak a few things around the edges.”

Many trade experts say that if the US and China can reach a framework agreement, it won't be the "epic” trade deal that Trump is promising. And despite what the president says, economist David Weinstein said trade wars are in fact, “not easy to win."

When a country (USA) is losing many billions of dollars on trade with virtually every country it does business with, trade wars are good, and easy to win. Example, when we are down $100 billion with a certain country and they get cute, don’t trade anymore-we win big. It’s easy!

Also, China doesn’t want to appear weak, to have buckled under US pressure.

“And so, they have their hackles up, we have our hackles up, and politically these things get very, very entrenched,” said Weinstein.

Trump is already threatening to put fresh tariffs on another $325 billion in Chinese imports. If that were to happen, virtually everything the US imports from China would be subject to a 25% import tax. For its part, China is threatening with further countermeasures of its own.