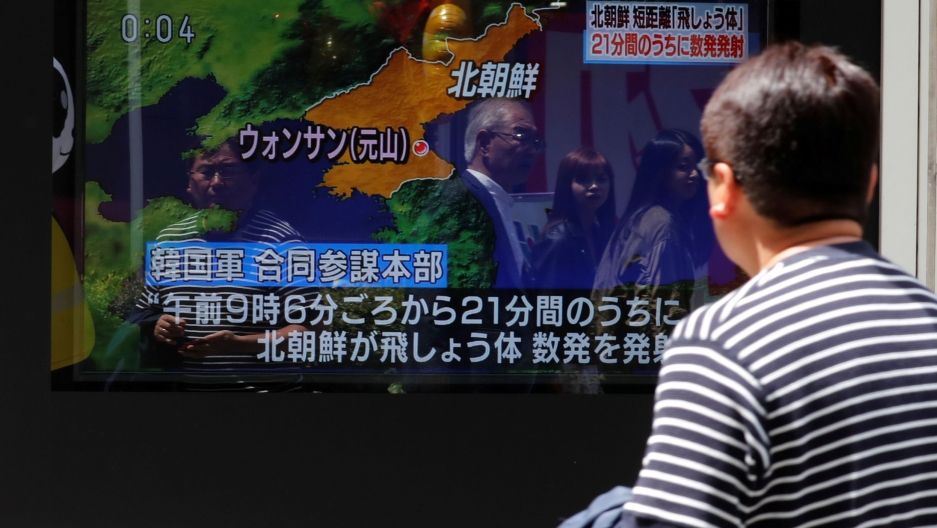 In what was the second test in a week, North Korea fired what appeared to be two short-range missiles on Thursday, South Korea's military said.

The launches came as US special envoy for North Korea Stephen Biegun was in the South Korean capital for talks with Foreign Minister Kang Kyung-wha and his counterpart, nuclear envoy Lee Do-hoon.

South Korea's president said the tests seemed to be a protest by the North after its leader Kim Jong-un and US President Donald Trump failed to reach agreement on the North's nuclear weapons and missile arsenal at a February summit.

"North Korea seemed to be discontented it could not reach a deal in Hanoi," Moon Jae-in said in an interview with South Korean broadcaster KBS.

The two missiles were fired from the northwest area of Kusong, in an easterly direction, the South's Joint Chiefs of Staff said in a statement.

They covered distances of 260 miles and 168 miles and reached an altitude of about 30 miles before falling into the sea, they said.

Analysts said it was too soon to say exactly what kind of missiles they were.

"You don't know what missile it is just from how far it flew," said Yang Uk, a senior research fellow at the Korea Defence and Security Forum.

Such a range would probably exceed that of most of the rockets North Korea fired on Saturday from its east coast into the ocean, sharply raising tension at a time of stalemate in its talks with the United States.

"North Korea has returned to its classic escalation tactics from before," Yang added. "I believe they will keep escalating by using what appear to be short-range missiles, something that will not cause the US to react right away."

After Thursday's launch, South Korea's military said it had stepped up monitoring and security in case of another launch, and was working with the United States to get additional information on the missiles involved.

South Korea's presidential Blue House called the missile launches "very worrisome" and unhelpful for efforts to reduce tensions on the peninsula and improve Korean relations amid protracted talks on denuclearization.

A spokeswoman for the Blue House said national security adviser Chung Eui-yong was closely monitoring the situation through a video conference with the military.

In his KBS interview, Moon said even if the missiles were short range, they could still violate UN resolutions barring North Korea from developing its ballistic missile force.

Still, Moon said he saw the tests as a sign that North Korea wanted to negotiate, and said he planned to push for a fourth inter-Korean summit with Kim.

Japan's defense ministry said it had not detected any ballistic missile in its territorial waters or exclusive economic zone and saw no direct impact on security. North Korea has test-fired rockets over Japanese territory in the past.

The Kusong area has been used to launch multiple missile tests in the past, including North Korea's first successful intercontinental ballistic missile (ICBM) in 2017.

It is also about 25 miles north of the site of a medium-range Rodong missile base on North Korea's west coast, South Korean military officials said.

On Saturday, North Korea also launched at least one short-range ballistic missile, which analysts said could travel about 310 miles.

This week, North Korea lashed out at the United States and South Korea, saying Saturday's tests were "regular and self-defensive" and rejecting the notion that they were provocative.

South Korea had responded to those tests by calling for an end to acts that escalate military tension.

At the end of 2017, North Korean leader Kim declared the country's nuclear force was complete and extended an olive branch to the South and the United States, holding two summits with Trump and three with the South Korean president.

But Kim's second summit with Trump broke down, with the United States insisting the North give up its nuclear program, which it pursued for years in defiance of UN Security Council resolutions, and the North seeking sanctions relief.