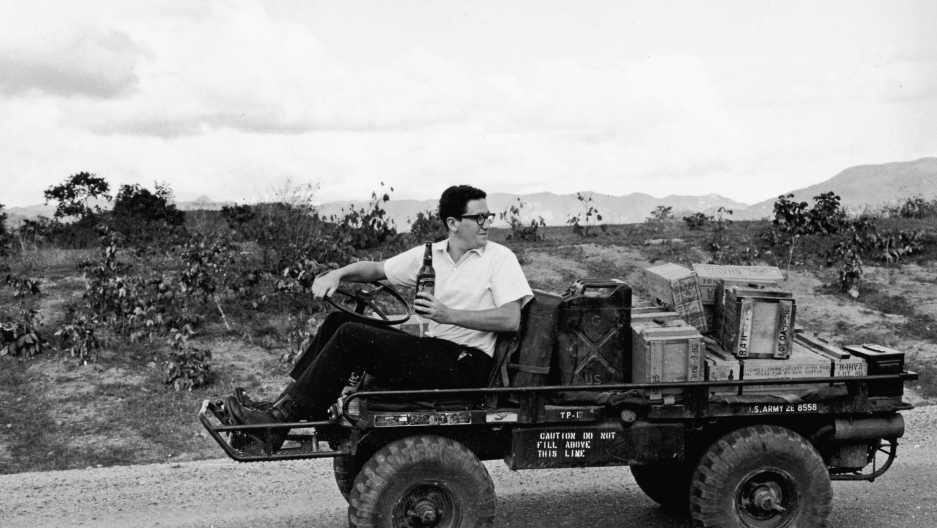 Richard Holbooke is photographed driving a US army vehicle in South Vietnam. He entered the Foreign Service after college and spent six years working in and on Vietnam in the 1960s.

Richard Holbrooke made a name for himself as a talented and daring diplomat. His career began during the Vietnam War and he was instrumental in crafting US foreign policy throughout many major events, all the way up to the presidency of Barack Obama. He was also known for being a flawed man and was often described as difficult.

Packer's introduction draws a parallel between Holbrooke and the "American century:"

What's called the American century was really just a little more than half a century, and that was the span of Holbrooke's life. It began with the Second World War and the creative burst that followed — the United Nations, the Atlantic alliance, containment, the free world — and it went through dizzying lows and highs, until it expired the day before yesterday. ... It wasn't a golden age, there was plenty of folly and wrong, but I already miss it. The best about us was inseparable from the worst. Our feeling that we could do anything gave us the Marshall Plan and Vietnam, the peach at Dayton and the endless Afghan war. Our confidence and energy, our reach and grasp, our excess and blindness — they were not so different from Holbrooke's. He was our man. That's the reason to tell you this story. That's why I can't get his voice out of my head.

Packer spoke to Carol Hills about his book and the contradictions of Richard Holbrooke.

George Packer: The idealist wanted to help refugees, end the war in Bosnia, make HIV/AIDS a priority at the United Nations and do a lot of good. The egotist was driven by a molten ambition, just a demon inside him that pushed him to do things that most mortals would shy away from in pursuit of his own goals.

Carol Hills: To be honest it's hard reading your book without wanting to scream. Holbrooke is such a complete pain in the ass. How did he become such an insufferable, bombastic career climber?

There was a break missing on his behavior that most people have, an internal governor that would have stopped him from flattering Barack Obama, for example, when it was clear that the worst thing you could do with Barack Obama was to flatter him. But Holbrooke was also a lot of life. He had an appetite for life, but if you seem to be standing in his way then he would be terrible, and those were the people who became his lifelong enemies.

He was assigned to a rural province in the Mekong Delta called Ba Xuyen, where the Viet Cong were very strong and where the South Vietnamese army was beginning to melt away and the civil defenses that Holbrooke was partly responsible for were being overrun day and night by Viet Cong forces. So, he was just looking at facts because he happened to have arrived at ground zero of the war. He was intellectually honest enough and brave enough physically and morally to see the truth and to report that to higher-ups. 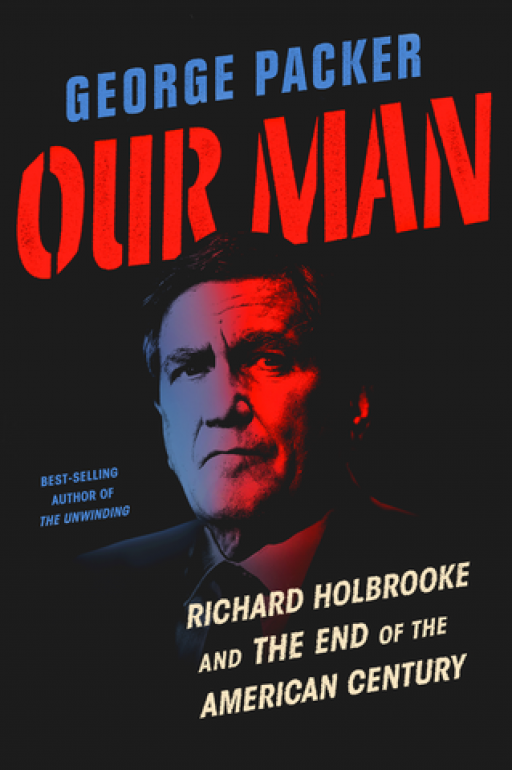 George Packer's "Our Man: Richard Holbrooke and the End of the American Century."

In Bosnia, he seemed to have been able to do some things and others weren't able to do. He was the force behind the 1995 Dayton Accords. Take us to one of the moments when Holbrooke made a pivotal difference in helping to end that conflict. How did he do it?

He pushed the three Balkan leaders from Croatia, Bosnia and Serbia to begin to negotiate with each other. The real turning point was when he applied diplomatic pressure to force them to talk and at the same time, military pressure by getting NATO to finally begin a serious bombing campaign against the Serb positions around Sarajevo. That combined diplomacy and force were in perfect balance at that moment and finally ended a war that had defeated many leading diplomats of the day. Holbrooke was the one who got it done. He got it done partly by being a pain in the ass, as you said earlier, by never taking no for an answer. He just didn't give up. He was persistent and that was a cussedness that could be really difficult to deal with in private life, but that ended the war in Bosnia.

Throughout the book, you weave the personal and political with a real emphasis on the women in Holbrooke's life, his wives as well as girlfriends and paramours. What was the point there?

Well, he's a man in full and I'm not just interested in Holbrooke as a diplomat or Holbrooke as a historical figure. Holbrooke would not have been interested in Holbrooke just as a diplomat. He was interested in human beings and had a real effect on people, men and women, but the women in his life were particularly important because I think he was only himself around them. It's through his relations with women that I think we really get to the heart of Holbrooke, much closer than with men. If I'd ignored those relationships, I think we would have lost sight of who he really was, both for better and for worse.

It's hard to separate Holbrooke the man from his career because well into the 2000s — he died in 2010 — he's still behaving like a kind of brilliant but hapless man. He's barely able to tie his shoes but always flirting, cajoling, persuading, and admonishing. He needed to be waited on and catered to. We're well into different relationships between the sexes and it was just depressing to read that he could be this kind of man in 2010.

Well, first of all, I think there are plenty of men out there who are not that different from Holbrooke. They just have maybe gone undercover in the last few years. Secondly, he couldn't see himself and this was maybe his basic flaw. He could be a brilliant judge of other people. For example, he would give a great analysis of Barack Obama as a president, but when a friend would ask him, "How do you think you affect Obama?" he didn't have a clue. The truth was that he was having a very bad effect on Obama, for some of the reasons you've been suggesting.

Related: Madeleine Albright: 'Many of the best diplomats are women'

You always make sure to describe all the women in Holbrooke's life, their looks, whether they were sexy or dowdy. Part of your description of Kati Marton, Holbrooke's third wife — some of the things you say about her: "She was indisputably beautiful; breasts larger than he expected. He liked that, too. Her beauty wasn't the kind that sat back and waited to be unveiled." All we get about Holbrooke is that he had food stains on his clothes and a potbelly at times. I've read a lot of your writing and these descriptions of women don't sound like your usual textured and three-dimensional prose. Why did you do that?

I don't think you're reading it correctly because there's a great deal about Kati Marton, Litty Holbrooke, Madeleine Albright and Hillary Clinton that talks about their ideas, their views, and their inner life even. You've taken a few lines and turned it into an entire book, which is not fair. But that's how Holbrooke saw women, to some extent, and it would be dishonest for me to pretend otherwise for the sake of appearing to be somehow above it. I think if you found some other passages to read, you would have to acknowledge that these women get a portrait that's as full as the portrait of the men in his life. 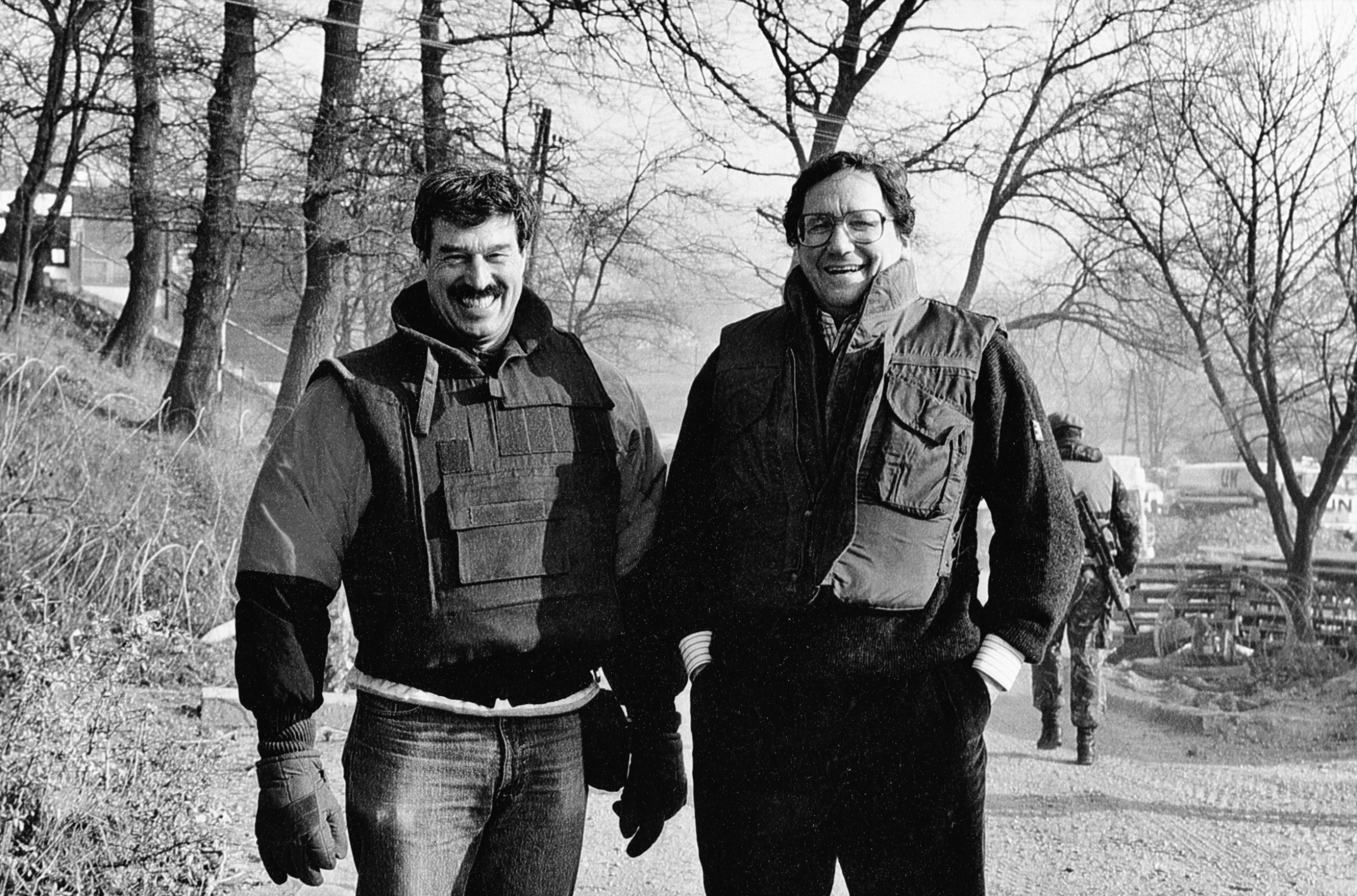 Richard Holbrooke (right) and Lionel Rosenblatt (left) on the road to Sarajevo.

Absolutely, that's one of the contradictions about Holbrooke. He liked and nurtured smart women. He was a mentor. As a writer, it was a weird choice — to me — because the book precisely is very balanced and in-depth. It just seemed like, "Well, how come we're not talking about men that way?"

In your gut, do you feel like if Holbrooke had had a different personality that he might have reached the summit of his career, which would have been being secretary of state?

I can't imagine a different Holbrooke. He was himself all the time, including in the very last minutes of his life when he was giving instructions to his staff, planning for the press statement after he came out of the surgery, flirting with the cardiologist, expressing deep fear about the end of his life. He was himself. You could say a different person might have become secretary of state; someone more diplomatic, more suave and smooth, knowing how to operate, and being restrained and self-aware. But I'm not sure that person would have ended the war in Bosnia because it took a kind of shamelessness and relentlessness and willingness to fail in order to end a war that had defeated the attempts of everyone else who tried. That's why I think you can't disentangle the sides of Holbrooke. You have to accept all of him — without liking all of him — in looking at him as a character and a figure in history.