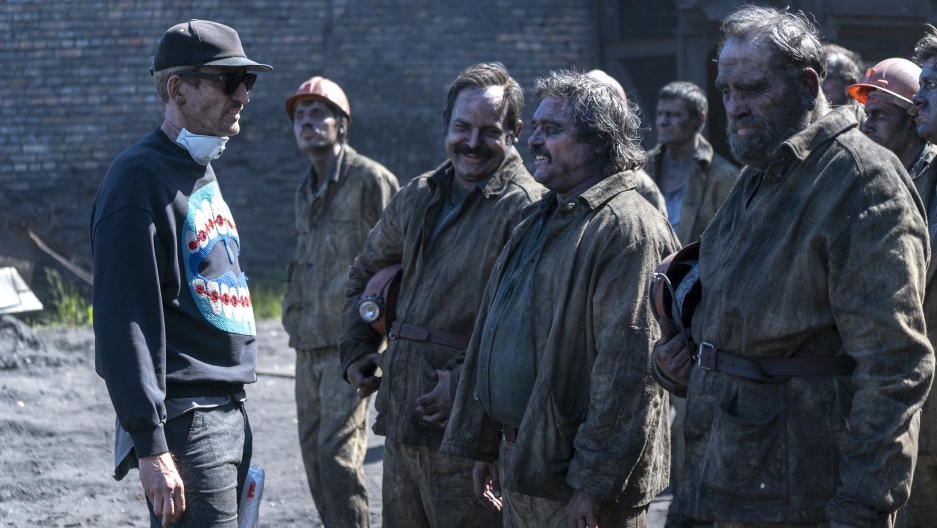 Johan Renck, right, works on the set of HBO's "Chernobyl."

On April 26, 1986, the No. 4 reactor at the Chernobyl Nuclear Power Plant near Pripyat, Ukraine, exploded and started a fire during a safety test. By the time the fire was contained, the incident — one of only two level-7 events in history on the International Nuclear Event Scale — had sent deadly radiation into the air and over western Europe, killed dozens and sickened more.

HBO is releasing a five-part miniseries dramatizing the disaster, which was the worst nuclear power accident in history.

Director Johan Renck ("Breaking Bad") spoke with Carol Hills about the making of this series.

Carol Hills: You shot this series in the Ukrainian city of Kyiv. From what I understand, you shot that first scene at a power plant in Ignalina, Lithuania. What was it like to film at an actual power plant?

Well, it's pretty daunting from a lot of levels. This is an RBMK reactor, which is a sister plant to Chernobyl. It's the same type of construction and the same type of power plant. It was built pretty much at the same time. Now, this one is decommissioned, so they've taken out all the fuel from it. Nevertheless, it is such an ominous structure. The building is so big and so quiet and still and retro-futuristic in some weird way. Just the fact that this is a Soviet-era nuclear power plant was humbling and slightly scary.

Related: Wildlife in Chernobyl is thriving 30 years after the nuclear accident

Were you able to talk to people who were at Chernobyl back in 1986?

Oh, yeah. I spent time in Kyiv when we were scouting there meeting with survivors; liquidators and people who worked in the aftermath and the cleanup operation. Chernobyl is only 200 kilometers (125 miles) away from Kyiv. Everybody in Kyiv has a relationship to Chernobyl and Kyiv is a massive city with 7 million people. There were crew members who had parents or family involved in it and then there were people who were actually there. It was tremendous, actually.

Why did you want to make this series about Chernobyl and why did you feel compelled to turn it into a drama?

I'm drawn to desperation, darkness, and the human beauty within those kinds of things. What happened once I read the script was that I understood how important this story was to tell on a lot of levels because of the cost of lives. We're in a climate right now in which there's actually a war on truth and people are preferring their own opinions to those of experts.

Related: Chernobyl and ‘the summer without children’

I want to play the first line that you hear in your series. Let's listen.

"What is the cost of lies? It's not that we'll mistake them for the truth. The real danger is that if we hear enough lies, then we no longer recognize the truth at all."

Those lines set up that whole series. In doing the series, are you also trying to draw attention to not only issues of truth these days that not everybody agrees on what it is, but also issues like climate change?

To some extent, it's embedded in there. This show undeniably deals with how human actions affect the world around us. The accident in Chernobyl effectively killed a massive part of Ukraine. It's still uninhabitable and there's obviously something interesting that we have an acute urgent situation in which we're killing this planet and we have people who deny that because it goes against their business ideas. So, yes, for sure.