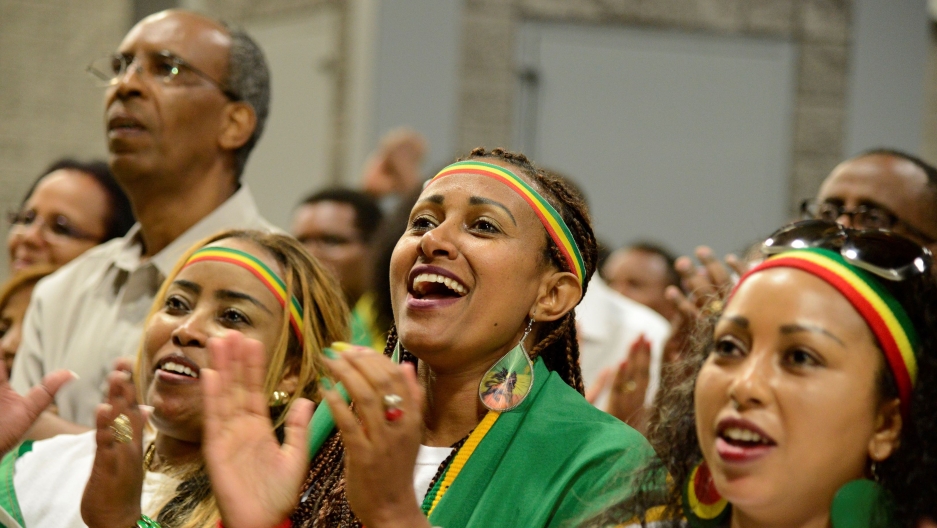 Members of the Ethiopian diaspora, the largest outside of Ethiopia, cheer as they respond to remarks by Ethiopia's Prime Minister Abiy Ahmed, calling on them to return, invest and support their native land with the theme "Break The Wall Build The Bridge," in Washington, July 28, 2018.

When the Instagram page Shades of Injera was started in 2014, the slogan was “We don't follow the culture, we create the culture.” On the page, they discuss sensitive topics like dating outside the Ethiopian community, sex and nontraditional religions. They also talk about the status of women.

For instance, on International Women’s Day this year the page featured the face of the country’s first female president photoshopped onto an image of Rosie the Riveter. It got thousands of likes. But Shades of Injera didn’t tackle the issue of sexual assault in a big way until the Lifetime documentary series “Surviving R. Kelly” came out this year.

“So, when ‘Surviving R. Kelly’ came out, everyone was just asking about it. The request was just crazy,” says a woman named S.

She’s one of the Ethiopian Americans who started the Instagram page. She asked The World not to use her real name because she wants to continue to post questions and speak freely about sensitive topics — she has received threats over things she’s posted.

S. says the R. Kelly documentary made her ask, “Who are the men in their own Ethiopian community who prey on younger women?” Within days, hundreds of women and some men began sharing their own stories of sexual assault.

“Everyone was saying, ‘I've actually never shared this before. This is my first time saying it,’” says S.

“People were desperate to do something and, you know, get their story out.”

‘Assault is a crime, not a culture’

The response was so overwhelming that they created a separate website called  #MeTooEthiopia with the tagline, “assault is a crime, not a culture.”

#Ethiopia's fight for gender equality https://t.co/uX78FScQmT
➡️A 2016 survey shows that a third of Ethiopian women have experienced sexual, emotional or physical abuse from their partner.
➡️Nearly one in four has been a victim of physical violence
➡️1 in 10 are victims of rape

On the 25th of every month, S. asks all of the followers of Shades of Injera and #MeTooEthiopia to openly discuss the issues of sexual assault in their communities. S. also asks those who post messages to tag lawmakers in Ethiopia and send separate, private messages to them asking them to address these issues.

One of the women who posted on the #MeTooEthiopia site is a woman named Milu. She lives in Addis Ababa. She wrote about being abused by her piano teacher when she was 8.

“So, I wanted to talk about my experience just because I feel like there are a lot of people and women particularly and men also that go through that. ... And they're afraid to talk about it because of victim-shaming.”

“So, I wanted to talk about my experience just because I feel like there are a lot of people and women particularly and men also that go through that,” says Milu. “And they're afraid to talk about it because of victim-shaming.”

Milu says there’s also the shame associated with outing a teacher or a relative, which is especially difficult in the community. It can dishonor the family. She says she was a teenager when she finally told her family about what happened.

She says her family wanted her to just move on and not talk about it. That’s why she shared her story on the #MeTooEthiopia website.

“Some responses from my family weren’t necessarily, ‘OK, I understand. Let's deal with it;’ it was more, ‘You shouldn't talk about it,’” says Milu.

‘This is every other woman you know’

Milu wants for people in Ethiopian society to speak freely about sexual assault, otherwise it will just keep happening, she says.

“I think we always say that like, yeah, people should know. It's always in the media and people should understand this,” says Milu talking about the awareness people should have about sexual assault.

“And I agree with that, people should. But the fact of the matter is they don't" due to shame, she adds.

She also says that the number of women experiencing sexual abuse in her community is very high.

“This is every other woman you know. We need to understand, you know, what it's emanating from. And it's also how we are raised. So, it's what are we giving to our kids?”

“This is every other woman you know. We need to understand, you know, what it's emanating from. And it's also how we are raised. So, it's what are we giving to our kids?”

Milu’s story follows a familiar pattern for the survivors who wrote in, S. says — girls being assaulted by older, trusted men.

“I think a lot of sexual assault victims at least from the stories that we got, has been from people who were their uncle. Or someone who's 20, 30, 40 years older than them. And it happened when they were young."

“I think a lot of sexual assault victims at least from the stories that we got, has been from people who were their uncle. Or someone who's 20, 30, 40 years older than them. And it happened when they were young,” S. says.

“So I’m a psych student who is on a pre-med path and I’ve had a couple of internships and networked with mainly psychiatrists and psychologists. I’m telling you this just to give you a backstory into why one of my friends felt comfortable to come to me a couple of days ago seeking advice/help. She told me that she had her first sexual experience with a boy she really liked and it wasn’t pleasant at all. They didn’t even have sex and just ended up making out but she didn’t like it. Right away after it happened she told me that she regretted growing up in a culture that put so much pressure and value on sex and even kissing someone. She felt like it was her fault for not feeling anything in that moment because she really likes this boy and the values our culture put in place had a very big influence in that. It was interesting to me how she connected it to culture and how it negatively affected her. A certain guilt kept popping in her mind and reminding her she’s wrong or she’s going to hell for this. I feel like that’s super unhealthy because not talking about sex or maybe not even doing it before marrying someone can be detrimental to your happiness in a relationship or marriage. Do you think this is something that often happens with our people? I brought up the idea of maybe not feeling as attracted to him or unconsciously not liking him as much but she’s sure that it was just the guilt and little voices (her family, people from church etc) in her mind. Thankfully we were able to talk it out but as a medical psychology student it interests me to know if a lot of people feel this way with their first sexual encounter and if it’s common in Ethiopian kids or those who grow up with this culture/values at home”

She adds that the power gap between Ethiopian men and women is much wider than it is in the West, which makes it even harder for victims to get help in their home country. Currently, she says, #MeTooEthiopia is mainly a social media movement. But they are trying to work with groups on the ground to help survivors get the resources they need, wherever they are: groups like Setaweet, which offers a place for women to talk about feminist topics and offer training and workshops for workplaces. The Yellow Movement, which is based at Addis Ababa University, is also an organization that advocates for gender equality.

Both Milu and S. see those organizations as inspirational. S. says one of the goals of #MeTooEthiopia is to start a nonprofit that capitalizes on the power of the social media campaign they’ve built here and abroad. S. and other Ethiopians have discovered that social media can be an effective tool to enact change, and she hopes to raise awareness and create a safe space for people to discuss these sensitive topics.

And while S. says she’s pleased with Prime Minister Abiy Ahmed’s efforts to name women to prominent positions in Ethiopia’s government, it’s still largely symbolic. She says change needs to happen on every level of society, and addressing sexual assault is a critical part of that.