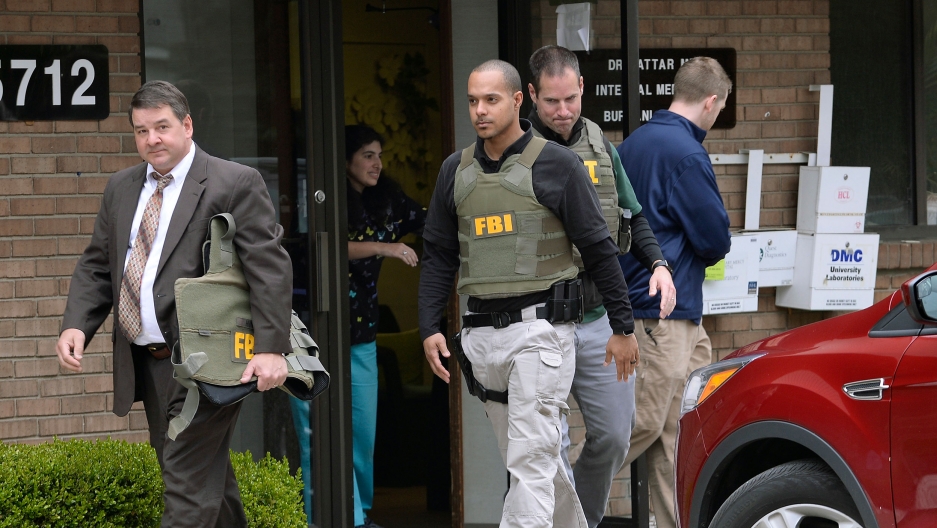 FBI agents leave the office of Dr. Fakhruddin Attar at the Burhani Clinic in Livonia, Michigan, after completing a search for documents. A federal judge in Detroit has dismissed one charge against Attar and Dr. Jumana Nagarwala in connection with a female genital mutilation case, April 2017.

Two years ago, a Detroit emergency room doctor, Jumana Nagarwala, allegedly texted, and called, two mothers in Minnesota to arrange clandestine operations for their 7-year-old daughters. Later, the mothers brought their daughters to a Michigan clinic where Nagarwala cut their clitoral hoods.

“I’m sure she thinks she did no wrong,” said Mariya Taher, who leads the anti-female genital mutilation, or FGM, advocacy group Sahiyo. Like Nagarwala, she is part of the Dawoodi Bohra sect of Indian Shia Muslims. Taher was cut as a child when she was visiting India. “My mother and my aunt took me. But I remember them also comforting me afterwards. So, I realized that I couldn't blame just one person. ... It was something that was much larger than that.”

Similarly, Nagarwala’s case became much larger than one person. It led to the first test of the US law that bans FGM for nonmedical reasons. That law was passed more than 20 years ago, as the US sought to satisfy international commitments to protect women from what was once a widespread practice in many parts of the world — and may still be. A 2012 Center for Disease Control and Prevention study estimates half a million girls in the US are at risk — although there’s not a lot of firm data on how often it happens.

“When this case arose in 2017, this was the only law we had, and we chose to use it,” said Daniel Lemisch, who approved Nagarwala’s indictment when he was acting US attorney for the Eastern District of Michigan.

He says they used the law even though they knew it was flawed. Michigan federal Judge Bernard Friedman ruled it unconstitutional in November 2018. He dismissed the charges against Nagarwala brought under the anti-FGM law.

Related: Tens of thousands of married women in Uganda are secretly undergoing 'the cut'

“I think this was purely a legal decision based on the law and the Constitution, and I think it will be fixed.”

“I think this was purely a legal decision based on the law and the Constitution, and I think it will be fixed,” Lemisch said.

"You have to look at whether the law itself has an interstate commerce aspect to it. In other words, the law has to say 'you need interstate activity of some kind in order for it to be a federal offense,'" he said. "And the law in this case did not contain such a provision. So, it's not that there wasn't interstate activity, it's that the law didn't require interstate activity, and therefore according to the court, it violated the Constitution."

Anti-FGM activists were disappointed, but the government still had the opportunity to appeal the court decision. Now, though, it looks like the Justice Department won’t pursue it. Last month, the Trump administration sent a letter to Congress saying there aren’t adequate grounds to defend the law and urged lawmakers to fix it.

Meanwhile, several states that don’t already have bans on FGM are considering bills to enact them. Some have faced opposition. In Connecticut, Susan Yolen, a vice president of Planned Parenthood of Southern New England, Inc., argued a law might end up putting more pressure on girls who’d have to turn in their own family members.

“And so, if they are frightened away from their health care provider because of a practice that many of us might consider you know, barbaric or dangerous, then that's not a good thing,” she said. “I think finding out what we need to find out about its prevalence is a good step one before we decide it's a criminal activity.”

Yolen was also suspicious after she learned the Connecticut bill was sponsored by people whom she thought might be Islamophobic.

“It's mostly Muslim folks who practice this procedure — they have been specifically targeted by the current administration.”

“It's mostly Muslim folks who practice this procedure — they have been specifically targeted by the current administration,” she said.

But more research may find FGM happens in other cultures, too.

“In our experience of working with FGM and survivors around the world, this is not based in any one religion,” said Shelby Quast, national director of Equality Now, a group that advocates for women’s rights. “Even in this country, recently women who were raised in Christian and white [communities] and in Midwest America had experienced FGM.”

Quast said until there’s an effective federal law and state laws, girls will be at risk. For now, she hopes Nagarwala is convicted. Nagarwala is still facing a federal obstruction charge — a felony that could be punished by 20 years in prison. And, Quast said, the state of Michigan could take action.

“They could charge her still and we would encourage [them] quite strongly to do so if the federal case doesn't move forward,” she said.

“The whole reason they do this procedure is to make boys and girls equal,” Smith said. “It's not to diminish sexuality; it's not to make sex unpleasant.”

“Quite frankly, I think this case is like a storm of perfect conditions that make her a very easy target to have most people easily hate her,” she said. “I can't believe the number of people that write, ‘She needs to go back to the country she came from’ — when she was born here.”

Taher, though, said Nagarwala may have had good intentions, but what she did was wrong.

“We’re at this tipping point,” she said. “We are seeing that communities are recognizing, and others are recognizing, that this is harmful, and I don't think any form of harm to a child should be allowed by any culture or religion.”

Taher said stronger laws would send the message that culture shouldn’t be confused with violence.

Correction: An earlier version of this story misstated that Mariya Taher was cut by a family member.