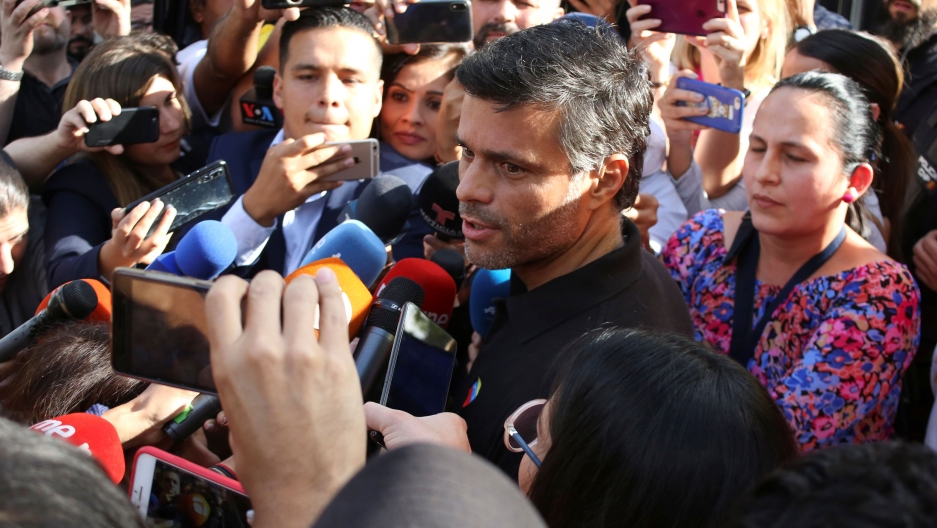 Venezuelan opposition politician Leopoldo López talks to the media at the residence of the Spanish ambassador in Caracas, Venezuela, May 2, 2019.

Venezuelan opposition politician Leopoldo López disclosed on Thursday that he met with senior military officials before a failed uprising against President Nicolás Maduro this week.

López, who is evading arrest in a Spanish diplomatic residence, suggested coordination continues with armed forces figures in the campaign to oust Maduro and that more "military movements" were on the way.

But Maduro sought to show that the military remains on his side by appearing early on Thursday on state television with his defense minister and military operations chief.

The pre-dawn military uprising on Tuesday, urged on by opposition leader and López ally Juan Guaidó, failed to gain steam as security forces loyal to Maduro cracked down on demonstrators who had taken to the streets.

"The fissure that opened on April 30 will become a crack, and that crack is what is going to break the levee," Lopez told reporters from Spain's Caracas diplomatic residence.

He said he had met with commanders and generals from different sectors of Venezuela's armed forces in his home in the past three weeks. "There we committed ourselves to contribute to the end of the usurpation," he added.

Related: Maduro hangs on as Venezuelan protests peter out

López, a firebrand politician and Guaidó's mentor, was arrested during a protest movement in 2014 and transferred to house arrest in 2017. He appeared together with Guaidó and dozens of soldiers on Tuesday after escaping his home and before seeking refuge at the Spanish residence.

A Venezuelan court on Thursday issued a warrant for López's arrest, saying he violated an order that required him to remain under house arrest and restricted his ability to speak publicly. A Spanish government spokeswoman said Madrid had no intention of turning him over to Venezuelan authorities.

López's surprise escape provided a jolt to Guaidó's movement, more than three months after he invoked the country's constitution to assume an interim presidency, arguing Maduro's 2018 re-election was illegitimate.

Guaidó, the head of the opposition-run National Assembly, has been recognized as the South American country's legitimate leader by more than 50 countries, including the United States and Spain. Maduro, a socialist who retains the support of Russia, Cuba and China, calls Guaidó a US-backed puppet seeking to orchestrate a coup against him.

López's comments came after two days of upheaval in the OPEC nation, which is undergoing a hyperinflationary economic collapse marked by shortages of food and medicine.

Tens of thousands took to the streets across the country on Tuesday and Wednesday, heeding Guaidó's call to keep the pressure on Maduro. Clashes with security forces left four dead, along with hundreds injured or detained.

Maduro, in his early morning speech, sought to reject claims by the United States and the opposition that the armed forces high command was prepared to turn against him to allow Guaidó to form a transition government and call elections.

Related: Cuban president fires back at Trump on Venezuela and sanctions

US officials have said Venezuela's military high command was in discussions with the Supreme Court and representatives of Guaidó over Maduro's exit. Elliott Abrams, the US special envoy for Venezuela, told broadcaster VPI on Wednesday that Maduro cannot trust his top military leaders.

US National Security Adviser John Bolton on Tuesday said Venezuelan Defense Minister Vladimir Padrino, along with the Supreme Court's chief justice and the commander of the presidential guard, had told the opposition Maduro needed to leave power.

But Padrino stood beside Maduro, who took over from the late President Hugo Chávez in 2013, in Thursday's address.

"Do not come to buy us with a dishonest offer, as if we do not have dignity," Padrino said.

The military is seen as key in Venezuela's standoff.

López did not detail whom in the military he had met with, but representatives of the opposition have approached several key figures in the armed forces in recent months, including a high-ranking army general, according to former General Antonio Rivero and another former senior member of Venezuela's military who spoke on the condition of anonymity.

Guaidó has promised amnesty for members of the armed forces who join his cause. In a tweet about the death of a protester at the hands of security forces on Wednesday, he said, "The murderers will have to take responsibility for their crimes" and members of the armed forces were "sworn to protect the people, not a usurper who hides while you watch them kill your brothers."

Guaidó has suggested a general strike as the next step to pressure Maduro, while US officials have said more sanctions are coming to choke off cash flow to Venezuela's government. The United States has already imposed sanctions on state-run oil company PDVSA, the OPEC nation's economic lifeblood.

On Wednesday, US President Donald Trump's top national security aides discussed a range of possible steps to squeeze Maduro and give eventual economic support to Venezuela if he falls, a senior administration official said.

The talks included sanctions, diplomacy and defense options, the official said, adding that there was "significant progress on defense matters" without providing details or saying whether any decisions had been made.

US Secretary of State Mike Pompeo has said US military action in Venezuela is possible but diplomatic and economic pressure are the preferred ways to oust Maduro.

In an interview with Brazilian newspaper Folha published on Thursday, Guaidó said he did not rule out a foreign military intervention to oust Maduro, but that it would be the "last option" after pressuring for a "free transition."

Russia said on Thursday it had agreed to continue talks on Venezuela with the United States, while China called for a political settlement via dialogue.

By Mayela Armas and Corina Pons/Reuters

Reporting by Mayela Armas Vivian Sequera and Luc Cohen in CaracasAdditional reporting by Roberta Rampton in Washington and Marcelo Rochabrun in Sao PauloEditing by Alistair Bell and Cynthia Osterman.