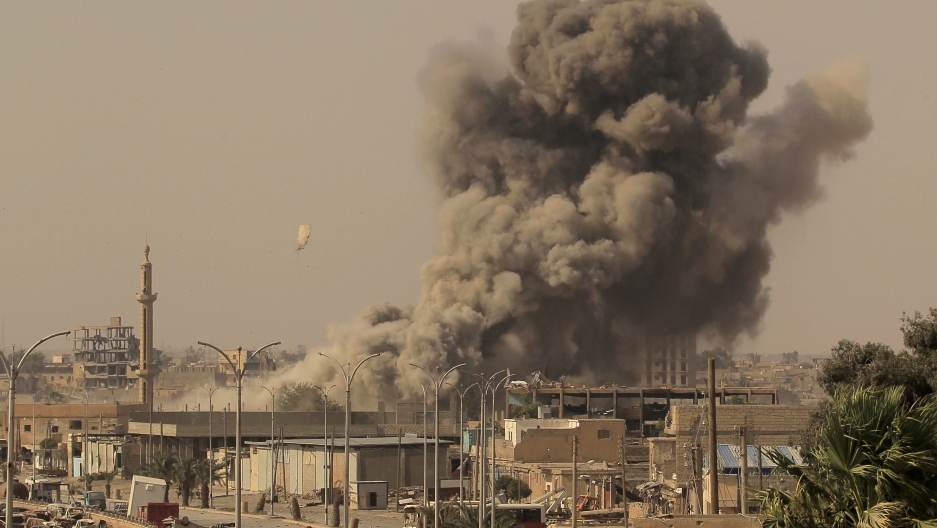 Smoke rises after an air strike during fighting between members of the Syrian Democratic Forces and Islamic State militants in Raqqa, Syria, Aug. 15, 2017

The Department of Defense has published its annual report summarizing civilian injuries and deaths connected to US military operations in Afghanistan, Iraq, Syria, Yemen, Somalia and Libya. Independent reports show that the DOD has seriously undercounted civilian fatalities in at least one operation.

The report includes updated figures for the 2017 Battle of Raqqa, a four-month campaign that drove Islamic State fighters from their capital. A military coalition of a dozen countries led by the US dropped bombs and fired artillery on Raqqa, Syria, from June through mid-October, destroying thousands of buildings.

“There were tens and tens of thousands of civilians trapped in the city, mostly hiding,” says Chris Woods, founder of Airwars, one of two NGOs who recently collaborated for a report on the civilian cost of the Raqqa operation. "And most civilians died when the buildings they were in collapsed on top of them."

While the new Pentagon report lists 162 dead, Airwars and Amnesty International documented more than 1,600 civilian deaths in the Battle of Raqqa.

“Overall, the coalition has only admitted to about 10% of the total number of reported civilian casualties,” says Donatella Rovera, the senior investigator on crisis response for Amnesty International.

She says most of the cases the Pentagon counted were documented first by NGOs such as hers.

“It's a little bit as if they only really look at cases when somebody else like Amnesty International has done all the work for them and presents them with all the findings, and then they kind of have to look into it,” she says.

"They basically wait for us to do the work, put the findings to them, and then in some cases they take responsibility for those cases. But that is not a satisfactory modus operandi."

Rovera spoke with The World’s Carol Hills just hours after the Pentagon report was released, about the importance of thorough reporting by investigators on the ground.

Carol Hills: Is there a difference in the methodology between how Amnesty and Airwars investigated and how the Department of Defense investigates and comes up with their numbers?

Donatella Rovera: I myself have been to Raqqa five times, spending weeks every time, visiting more than 200 sites and interviewing more than 400 survivors and witnesses, as well as examining the satellite imagery before and after the alleged strikes, looking at all the social media reports. Airwars looks at information that comes on open sources. They don't go to the ground and investigate, but they look at all the available information on open sources. As for what the United States Department of Defense does, I don't know. They do not go to the ground to investigate. Nor does the coalition. They basically wait for us to do the work, put the findings to them, and then in some cases, they take responsibility for those cases. But that is not a satisfactory modus operandi. They launch the strikes. They should be going and investigating, carrying out proper investigations. They have failed to do so up to now.

We actually asked the Pentagon how they went about investigating civilian casualties in Raqqa. And they said that their "analysis includes reviewing strike video, mission reports and input from a robust intelligence network, the depth of which is not available to the public."

Yeah. And that's precisely the problem. You know, going on the ground to do field investigation is not always possible in a post-war theater. But in Raqqa, it's possible. At Amnesty International, we've been to Raqqa many times. There is no impediment why the coalition is not doing it, why the Department of Defense is not doing it. There is only so much you can do by looking at videos and reports, and there is a lot more that you can do if you go and look at the site that was the subject of that bombardment.

I want to call your attention to something that Amnesty and the Pentagon seem to agree on. In the Pentagon report, I see figures from an attack that Amnesty also reported on. It's in Raqqa. On June 28, in 2017, and involves the Aswad family. Can you tell us what happened there?

The Aswad family. Yes, this is in in the Jezra area, to the west of the city center. Several members of the Aswad family were basically staying in the new building that the family had built and going to the old family home across the road where they were using the toilet and the kitchen facilities. So they were visible, because there were children, and they were going across the roads all the time, all day long, to use kitchen and toilet facilities. And then just before the evening meal, the building was bombed.

Which building? The building that they were living in, or the building with the kitchen and toilets?

The building where the family was: a new — brand-new — four-story building with a basement. The building was bombed. Two different types of munitions were used, according to the fragments that I personally found at the site. I found the remains of a Hellfire rocket and I also found the fin from a JDAM a guiding device for one of the MK bombs.

And those are both made by the United States?

They were both made in the United States.

And what happened to the Aswad family?

Out of how many?

Mohammad Aswad survived. His brother, his brother's children, his cousin and the wife and the children. Everybody died.

"They just don't investigate, and that's the failure for which there is no justification."

Do you think the Pentagon is genuinely trying to improve its reporting on civilian casualties?

I hope they are. But if they don't go to the ground to investigate, and there is no reason why they are not doing so — it says in their methodology that they do go where possible. It is certainly possible to go to Raqqa. They go to Raqqa all the time; they go and meet their local partners. When I've been walking around the streets in Raqqa, I've seen United States soldiers being escorted around the city in vehicles. So they definitely go there. They just don't investigate, and that's the failure for which there is no justification. So if they want to improve their reporting methods they really need to — they really need to do investigations that are worthy of that name, rather than wait for an NGO like Amnesty International to do the work for them, which is you know what we've been doing for the past 18 months really.

The World reached out to the US Department of Defense for additional comment. Pentagon spokesperson Navy Commander Candice Tresch responded by email.

Although civilian casualties are a tragic and unavoidable part of war, no force in history is more committed to limiting harm to civilians than the US military, which routinely applies standards that are more protective of civilians than required by the Law of Armed Conflict.

As previously mentioned, following an airstrike, DOD conducts analysis to assess whether desired effects were achieved and to determine if civilian casualties resulted. Analysis includes reviewing strike video, mission reports, and input from a robust intelligence network — the depth of which is not available to the public. We look at any and all sources for allegations of CIVCAS [civilian casualties] to include self-reports, social media, NGOs, news organizations and personal allegations.

In addition, we continue to be open and transparent about our strikes and civilian casualty reports. We have provided extensive information to Amnesty International on our targeting process including multiple background briefings on targeting with regard to the mitigation of civilian casualties and extensive written responses to requests for information. Additionally, the deputy under secretary of defense for policy briefed Amnesty International, Airwars, and other NGOs on our constant efforts to improve.