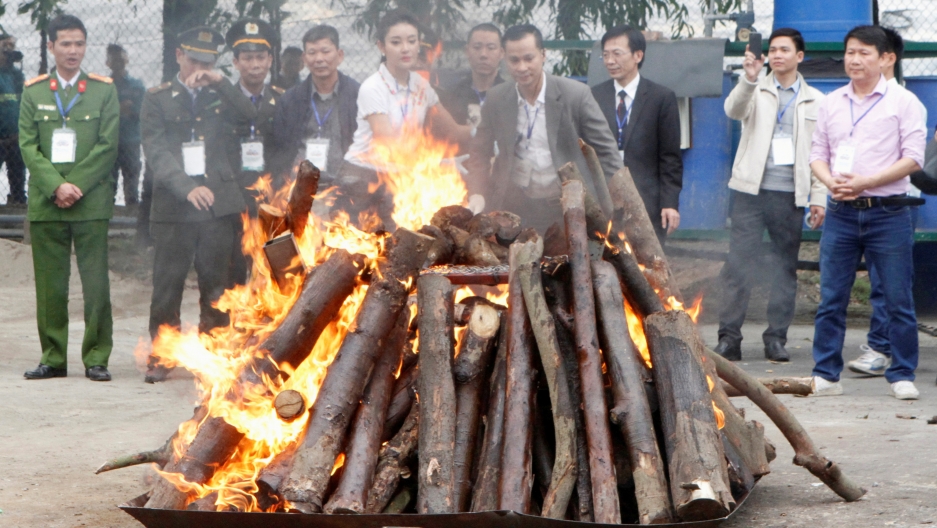 Vietnam is one of the world’s largest consumers of rhino horn, contributing to the continued poaching of rhinos in the wild. Last year in Africa 1,100 rhinos were killed by poachers. And today there are only about 29,500 left in the world.

Considerable efforts have been devoted to reducing the demand for rhino horn in Vietnam. In 2015, the Government of Vietnam increased sanctions on the illegal trade and use of rhino horns. And, through a variety of campaigns, conservation organizations have tried to educate Vietnamese consumers about Africa’s rhino poaching crisis and the uselessness of rhino horn in medications.

Related: Can a controversial IVF process save the northern white rhino?

We conducted a study to shed light on why people use rhino horn. To do this we interviewed consumers who admitted to using rhino horn in Vietnam.

We found that people used rhino horn for a number of purposes, principally as a medicine and as a status symbol. The most prevalent use was for treating hangovers. Other uses included using it to honor terminally ill relatives.

We also found that consumers preferred wild rhino horn over farmed rhino horn. And that they weren’t affected by stigma or concerns about rhino populations.

Our findings suggest that the demand for rhino horn is unlikely to fall because people’s beliefs are firmly entrenched. Our hope is that our findings help reshape the focus of future conservation campaigns by targeting the prevalent reasons for its use and the values associated with it.

We interviewed 30 self-confessed, recent users of rhino horn and one rhino horn trader. They came from the upper-income bracket of Hanoi, the capital of Vietnam.

The people we interviewed said that they used rhino horn to treat various ailments including hangovers, fever, gout and potentially terminal illnesses, like cancer or stroke. Some people also gave it to terminally ill relatives to console them and show that they had done everything in their power to help them.

Related: A new effort is underway to save the Sumatran rhino

Our findings confirm that the idea that rhino horn has magical healing properties is deeply rooted in Vietnam.

Aside from being used as medicine, rhino horn is considered a status symbol. Consumers said that they shared it within social and professional networks to demonstrate their wealth and strengthen business relationships. Gifting whole rhino horns was also used as a way to get favors from those in power.

We found that the use of rhino horn doesn’t attract a stigma in Vietnam. The consumers we interviewed said they weren’t concerned about poaching or the plight of rhinos. The killing of rhinos in Africa was seen as a remote issue, something that happened far away, out of their influence because they didn’t kill the rhinos themselves.

They were also not concerned about the legal repercussions of buying it. The penal code of Vietnam prohibits illegal trade and use of rhino horn. However, all interviewed believed that the police would not pay attention to rhino horn use and that law enforcement efforts only focused on illegal trade in large quantities. And they’re not wrong.

And it’s not just the consumers who aren’t worried. A former trader of rhino horn said that potential profits from the trade far outweighed any risks.

Our findings shed light on why current campaigns against rhino horn purchases aren’t working. For example, they tend to highlight the plight of rhinos, suggest that rhino horn doesn’t have medicinal properties or emphasize the legal consequences of purchasing it. Some campaigns also compare rhino horn to human nails (because they’re both made of keratin).

From our research, it’s clear that people who buy rhino horn won’t be won over by any of these arguments.

In addition, our finding that consumers prefer rhino horn from wild animals has implications for the suggestion made by some observers that a controlled legalized trade could reduce poaching. We conclude that, in fact, such a trade would simply increase demand for poached rhino horn.

We hope that our insights will lead to campaigns that promote behavior change. And campaigns that are better informed about the values associated with the use of rhino horn and that target the most prevalent types of uses.

Whether or not the legalization of trade in rhino horn will be a solution to the poaching crisis is the focus of an ongoing study that we’re doing.