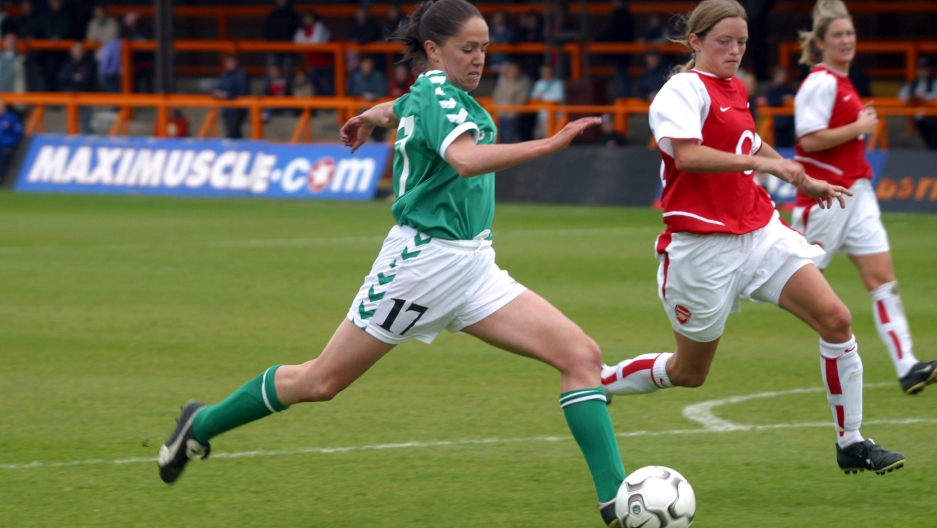 Ciara McCormack, in green, is closed down by opposing players during a match in 2003. McCormack wrote a blog post criticizing how the Vancouver Whitecaps soccer club handled allegations against a former coach.

Fans of the Vancouver Whitecaps, a professional soccer club in Canada, are walking out on their team during games. They’re angry with the club for the way it’s handled abuse allegations against a former coach, which date back to 2008.

The allegations resurfaced recently after former Whitecaps player Ciara McCormack wrote about her own experience in a blog post.

The World’s Carol Hills asked her what caused her to come forward again now.

Ciara McCormack: The CBC did a big story about abuse in sport. And I think for me, that was the first time that I saw it being spoken about and recognized in Canadian society. I was asked to go on a TV show around this article and ask questions and ask experts about if national sport organizations could properly investigate themselves. The answers were so, I thought, subpar, in terms of saying things like, "Oh, we've got policies on our website," and all this kind of stuff that I knew didn't work. All the people that are involved with the Whitecaps, like [team president] Bob Leonarduzzi, [chief operating officer] Rachel Lewis, people that were involved in our situation in 2008, were still there. And just feeling that it's the same situation for players. There was a situation in 2017 that a mom was on the news talking about how her son had been assaulted and how the Whitecaps tried to handle it internally, which was sort of the same protocol. So, I think it was just a combination of knowing all the factors were the same.

No. So, things have come out, obviously, since I've written the blog — lots people have stepped forward. Our manager with the Whitecaps at the time went on record in the media in Vancouver to say that she went to the Whitecaps management numerous times with concerns as an adult in the situation. So, they were well aware that this was going on but not really doing anything about it. There was an investigation that they told us was handled by a third-party ombudsman. But since then, it has come out that it was actually a lawyer that they hired. They never interviewed the girls on the team that experienced those things. So, all this has been coming out since.

So, how has the current Whitecaps management handled these allegations as of your blog and as of the current news media cycle that's focusing on it?

I think the strategy seemed to be, in the beginning, they thought this was just going to go away. Nobody reached out to us. It was just all very, very generic statements.

That statement we refer to, it said, “The club holds itself accountable for creating a respectful, progressive workplace for all staff and players, that club players have access to an ombudsperson to share information on a confidential basis and that, in this case, that ombudsperson had no recommendations for further action.”

Now, let's talk about Bob Birarda, the coach at the center of this. What is he doing at this point? What's his situation?

At this point, he hasn't been charged, which I think is an important thing to say. He hasn't commented publicly.

Is he coaching women's soccer currently?

He was actually coaching right up till the day after my blog. He was suspended from his club. He's been on the field essentially three months after he was let go by the Canadian Soccer Association and the Whitecaps. He was back on the field coaching teenage girls because there wasn't anything publicly that was said that could have made a club do anything about it from a technical standpoint. Since then, he's been suspended from his club, but he still has his coaching license. The Canadian Soccer Association, or BC Soccer, as far as I know, haven't suspended his coaching license.

Was he let go from the Whitecaps because of this controversy?

From what we were told, yes. The timing of it was six weeks before the World Cup, they had won the CONCACAF [tournament] and beaten the US. So, the team was playing well on the field. We were told behind the scenes that he was let go because of this, but it was announced publicly as a mutual decision and the Canadian Soccer Association went as far to say in their statement that they wished him the best of luck in the future.

How do you feel about Whitecaps fans, I mean fans of the men's Major League Soccer team, supporting you so publicly by staging walkouts during soccer games?

I mean, it's been incredible and not something I think that any of us were expecting. Change needs to happen. It can't just be the group that had something happen to [it], it has to be other people stepping forward. I've been so inspired by them getting involved in this.

Ciara McCormack played for the Vancouver Whitecaps soccer team in 2008 and she's one of the players who allege inappropriate behavior by former coach Bob Birada.