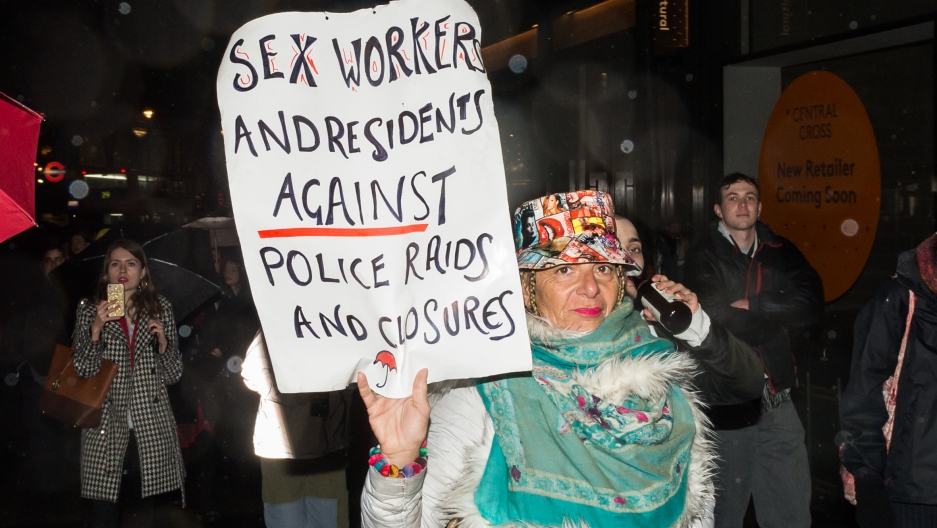 After the United Kingdom voted to leave the European Union in 2016, large industries have struggled to handle the ramifications of the upcoming Brexit. One affected industry that does not get much coverage is prostitution.

Laura Watson is the spokesperson for the English Collective of Prostitutes in London. She spoke with The World's Carol Hills about what Brexit has meant for the numerous foreign prostitutes residing in the UK and what her organization is doing to help foreign sex workers who are being unfairly threatened and deported from around the country.

Laura Watson: We are a sex worker organization based here in the UK, but we have an international network, including a sister organization in San Francisco. We also campaign for alternatives to prostitution, so that nobody is forced into it if they don't want to be. We campaign for decriminalization and the removal of the prostitution laws, so that sex workers can work together for safety, which we currently cannot do. Police are going around very regularly threatening women with arrest for prostitution for just working together with a friend. Women are having to move around a lot more and are running from the police. Therefore, it's very hard to establish basic safety, such as CCTV. It's a pretty scary time to be working.

Carol Hills: Is there a way to put simply what rights sex workers in Britain have, whether British or non-British?

Sex workers have the rights that other people have. For example, you don't have to let the police in if they don't have a warrant and you don't have to give the police a statement. It's legal to work as a sex worker, but it's illegal to work with somebody else and it's illegal to loiter and solicit on the street. To be working legally, you can work from premises, but you have to be completely on your own. Women don't want to work in that way. It's a very scary way to work. You're completely isolated.

Your group recently put out a brief very memorably called "Sex workers are getting screwed by Brexit." How?

We had a lot of women coming to us from Europe, mostly from Eastern Europe. In fact, mostly Romanian women who were working in the UK consensually and independently and wanted to keep on working but were being harassed by the police constantly for arrest and deportation.

So is your sense that police in the UK are using pro-Brexit sentiment and the feelings around those who support Brexit to crack down on non-British prostitutes, in this case Romanian, as just an extension of anti-foreigner feeling?

It certainly feels like that way to us and we do have some evidence that suggests that. We saw a number of women coming to us with cases including threats of deportation and racist abuse from police and from immigration officers.

Related: A Dutch brothel where women work for themselves.

Have you been able to prevent any of the women you represent from getting deported?

Yes, we have, and many women did appeal their deportation orders because they couldn't go home or didn't want to go home and this was their home. We did appeal many of those specifically on the grounds that women were exercising their treaty rights in other ways, like that they were students or working in another job and that's how women have won the right to stay here. We have had some success and we hope that this dossier gets the message out there and leads to more success in stopping deportations.