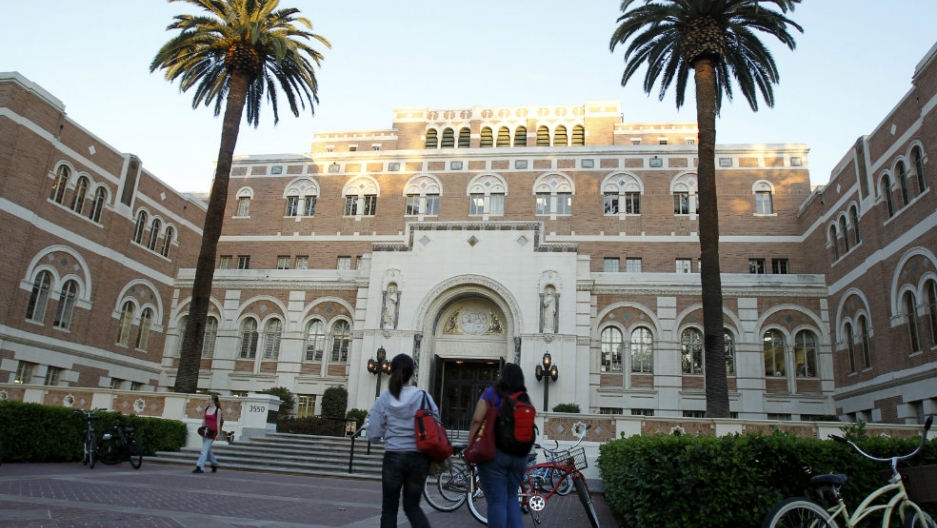 Students walk by Doheny Memorial Library at the University of Southern California in Los Angeles April 7, 2010. USC was among several universities implicated in an admissions scandal where parents allegedly paid a total of $25 million to ensure a spot for their children at elite US colleges.

The day news broke of the college admissions scandal, where dozens of people were accused of paying millions to ensure their children's acceptance at top US colleges through bribery, fraud and conspiracy, I was having my usual day as a Chicano/Latino studies teacher in Los Angeles County’s San Gabriel Valley. After a class discussion about the scandal, one of my students wondered, “Why didn’t the students [of the parents charged] just go to a community college?”

I was unsure what to tell the student in that moment. All I could say to her was, maybe they didn’t think of community college as an option because they have money. My students understand class and inequality in our education system — it is all around the community where I teach at three high schools. The district I work in has a student population that’s 92% Latino, and 82.5% of the students are on free or reduced lunch. What was so difficult for my student to grasp was that there were rich people who would go to extreme lengths to ensure their children didn’t attend just any university. If an “elite” school is the goal, why would they even consider a community college?

For the vast majority of the students I teach, community college is also the entry point, a way for poor, working class students to enter higher education.

Amid the outcry surrounding the elite university scandal and biased admissions policies typically favoring the wealthy, stories from the community colleges have gone unheard. For these institutions, students do not need to fill out lengthy applications or be required to take the SAT. There is no frenzy to apply to community colleges or to be accepted to them.

Community colleges have roots in the Morrill Act of 1862 when land grants were established to provide educational access to people from underserved communities. A second act passed in 1890 that opened higher education access to “minorities.” The first “junior college” formed in 1901 as an experimental post high school program by J. Stanley Brown, superintendent of Joliet Township High School and William Rainey Harper, former president of University of Chicago. The idea was that the junior college would provide the first two years of general education instruction and universities could concentrate their resources on research. Many four-year institutions followed suit, getting rid of general education courses. In many ways, community colleges were and continue to be seen as an extension of high school. During the 1950s, James Bryant Conant, then the president of Harvard University, advocated for community colleges, but with the understanding that two-year institutions were for the masses and institutions like Harvard were for the select few.

In California, the wealthy elite led the charge to expand community colleges in the early 1900s. By 1932, the Carnegie Foundation released a report designating tiers that would come to define higher education in California and impact the rest of the country. The report also outlines the selective nature of universities and the need to limit certain types of professionals. Through a complex admissions process, elite institutions can protect their status and justify the astronomical costs of enrollment.

After high school and for about five years, I attended Riverside City College in Riverside, California, about 60 miles east of Los Angeles. I was a student who barely graduated high school, from a working class Chicano/Mexican American family. Because of helpful people along my own journey, including counselors and a few caring professors who urged me to continue my studies, I eventually transferred to a University of California campus, which can be particularly challenging for a Latina/o students. The experiences of community college students became the focus of my research for my doctorate in education. The desire to learn and share their experiences was also my motivation to pursue my graduate degrees.

After hearing news of the admissions scandal, I immediately thought about my students. Here were parents cheating, lying, paying hundreds and thousands of dollars to ensure a spot at exclusive universities. But for my students — their options and their opportunities are contained within community colleges. 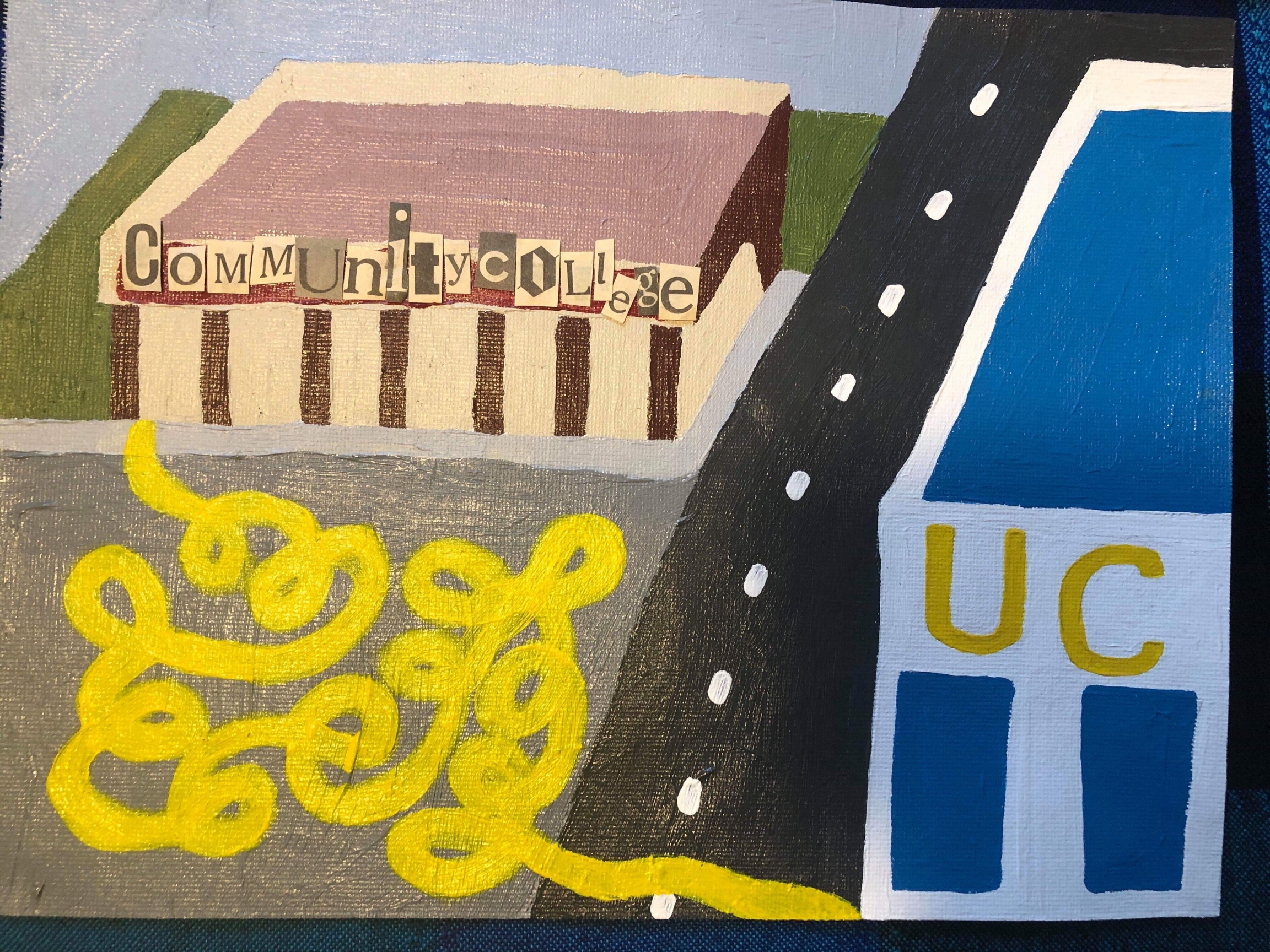 María Elena Valenzuela, a high school teacher in San Diego, California, created this art piece depicting the winding path from community college to a four-year university. According to the American Association of Community Colleges, while 80% of community college students say they would like to get a bachelor's degree or higher, only 29% end up transferring to a four-year institution within six years.

Out of approximately 80 students in my high school classes, many who are seniors, I know of four students who will be going straight to a four-year university upon graduation. After teaching for the past two years at the high school level, I learned that many of the students I teach don’t plan to go to college initially. The students I teach and those with my similar background often have to deal with daily life challenges such as working to support family, housing insecurities, violence in the community, tracking in the educational system and feelings of not belonging at school.

The reasons a student decides to go to community college are sometimes determined long before a student enters their senior year.

Moises A. Gurrola, a doctorate candidate at Texas Christian University in the history department, said he enrolled at a community college a year after graduating from high school.

“During high school, counselors directed me toward the military and vocational schools and did not allow me into college recruitment sessions,” he said. “I enrolled in community college to give college a 'test run,' with the expectation that I would not succeed.”

“During high school, counselors directed me toward the military and vocational schools and did not allow me into college recruitment sessions.”

Cory L. Cofer, a resource teacher in Southern California recalled how he attended a community college to continue playing sports.

“I didn’t earn scholarships in football, so I figured I can go to the local [junior college] and keep playing,” Cofer said. “To play I had to be enrolled in 12 units. I had no idea what classes to take, so I met with a counselor by the name of Mr. Romero. He shed a light on everything I needed to know. He gave me a plan and told me to execute it, which I did. I had not thought of transferring to a university until after that meeting.”

María Elena Valenzuela, a high school teacher in San Diego, California, didn’t enroll in community college until six months after high school because she was unsure what to do. A friend gave a her a list of steps: Go to the admissions office, ask about the Board of Governor’s Fee Waiver, (now the California College Promise Grant), ask about other financial aid, submit forms like the FAFSA and choose classes.

Even having help from a friend and knowing the steps, Valenzuela faced other challenges that made attending community college difficult.

Valenzuela’s experience is not unfamiliar to many current community college students. A survey of 40,000 respondents from 57 California Community Colleges found that 50% of respondents had been recently food insecure, 60% were housing insecure in the past year and 19% had experienced homelessness in the past year.

Community college students in the United States continue to lack resources and support. One report from the Century Foundation found that four-year private colleges spend an average of $72,000 per full-time student each year, public universities spend $40,000 and community colleges spend $14,000. Rising tuition rates, coupled with other insecurities also make transferring to a four-year university that much more challenging.

For students from poor and working-class communities, there is an additional assumption that if you go to a community college, it is because you couldn’t make the cut during the admissions process at a four-year university. As the college admissions scandal shows, that process is not always about skill or merit, but also about wealth. Students without same opportunities are often kept out.

Community colleges have served many more students than elite universities, and for many, provided a collegiate option that they didn't think was available for them. In the aftermath of this scandal, it is a reminder that  community colleges — and the students who attend them — need more resources to have the opportunities afforded those with wealth and privilege.

Editor's note: Irene Sanchez is a poet, writer and high school teacher of Chicano/Latino Studies in Los Angeles County. She attended Riverside City College and later received a bachelor's degree at the University of California, Santa Cruz. She also received a master's degree and a doctorate degree in educational and policy studies from the University of Washington. Her research focused on studying the experiences of community college students.