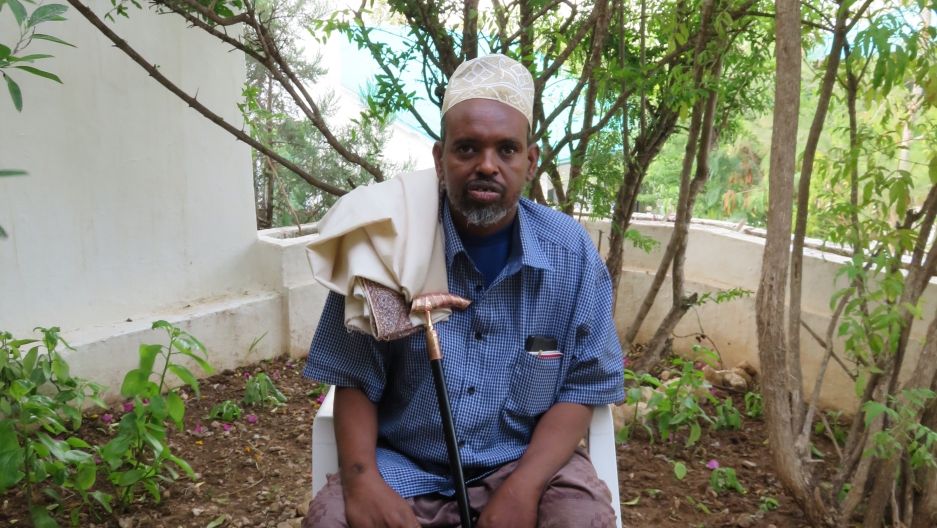 Somali businessman Farhan Warfaa, 48, was a victim of torture when he was 17. It's been over thirty years since he last saw his abuser. Now Warfaa will finally face him in a US court thanks to universal jurisdiction laws that allow victims of torture to testify in the United States.

Courtesy of Center for Justice and Accountability

In December 1987, when Somali farmer Farhan Warfaa was just 17, he and other young men from around the remote town of Gebiley were rounded up and brought to the headquarters of the Fifth Brigade of the Somali National Army for questioning about a stolen water tank.

Warfaa and the other detainees were all members of Somalia’s persecuted Isaaq clan. Somalia’s then-president, Siad Barre, had deployed troops to the country’s northwest to suppress the Somalia National Movement (SNM), a rebel group formed by members of the disaffected Isaaq clan in 1981.

Warfaa was tortured at least nine times in early 1998 at the army base, according to court documents reviewed by The World. A man named Yusuf Abdi Ali — known locally as Col. Tukeh — headed the Fifth Brigade and led some of Warfaa’s interrogations, it is claimed. Eventually, Ali’s soldiers released Warfaa back to his family in exchange for a bribe, and Warfaa thought he’d never get justice for the torture he endured.

Warfaa, who is now 48, is due to fly to the US under special immigration rules to come face-to-face with the former army chief, who he says tortured him, shot at him five times and left him for dead.

But next month, thanks to so-called “universal jurisdiction” laws that let foreign victims of atrocities bring complaints in civil courts in the United States, Warfaa, who is now 48, is due to fly to the US under special immigration rules to come face-to-face with the former army chief, who he says tortured him, shot at him five times and left him for dead.

Warfaa went on to have a family and own a business and has not seen Ali for 31 years.

Related: Somali civilians bombed by US airstrikes, targeted by al-Shabab

But in the early 2000s, the US-based Center for Justice and Accountability, which tracks and researches former war crimes abusers, discovered that Ali was a US green card holder who now lives in Alexandria, Virginia, and has worked as a security guard, including a stint at Washington’s Dulles International Airport. Lawyers from the CJA reached out to Warfaa and together they began a decades-long quest for justice.

Warfaa’s case will take place some 7,400 miles away from Hargeisa, Somaliland, where he lives now, in a courthouse in Alexandria, Virginia, where jurors will decide on the 31-year-old incident. And it comes just in time, as the Supreme Court has begun to limit cases like these in US courts.

"I want to see justice served, whether it’s in Somaliland or not."

Warfaa declined to speak to reporters before the week-long trial, which opens at the US District Court on May 13, but through his lawyers, he said he was glad to finally get his day in court: “I want to see justice served, whether it’s in Somaliland or not,” Warfaa said.

His lawyers told The World that “human rights abusers should face the consequences of their actions.” Warfaa’s complaint, filed to the courts, details some of the human rights abuses he suffered under Ali’s control.

Warfaa and the other detainees were held in a windowless cell without a toilet, according to court documents.

“The soldiers tightly tied his hands and feet together behind his back so that his body was arched backward in a slightly tilted U-shape, with his arms and legs high in the air, causing him excruciating pain,” says the complaint.

“This form of torture was called the ‘Mig’ because it placed the prisoner’s body in a shape that resembled the Somali Air Force’s MIG aircraft, with its swept-back wings.”

At one session in March 1988, Ali drew his “pistol and fired five shots” at Warfaa and left him for dead, says the complaint.

Warfaa, however, was shot in the wrist and the right leg, later regaining consciousness.

He was not the only victim of Ali’s unit. The Fifth Brigade committed many “gross human rights abuses” in the area, the complaint says.

Ali left Somalia in 1990 for the US and then Canada, where he gained refugee status. He was deported from Canada back to the US in 1992 for committing “gross human rights abuses in Somalia,” says the complaint.

Ali’s lawyer, Joseph Drennan, said his client would fight the claims in court. 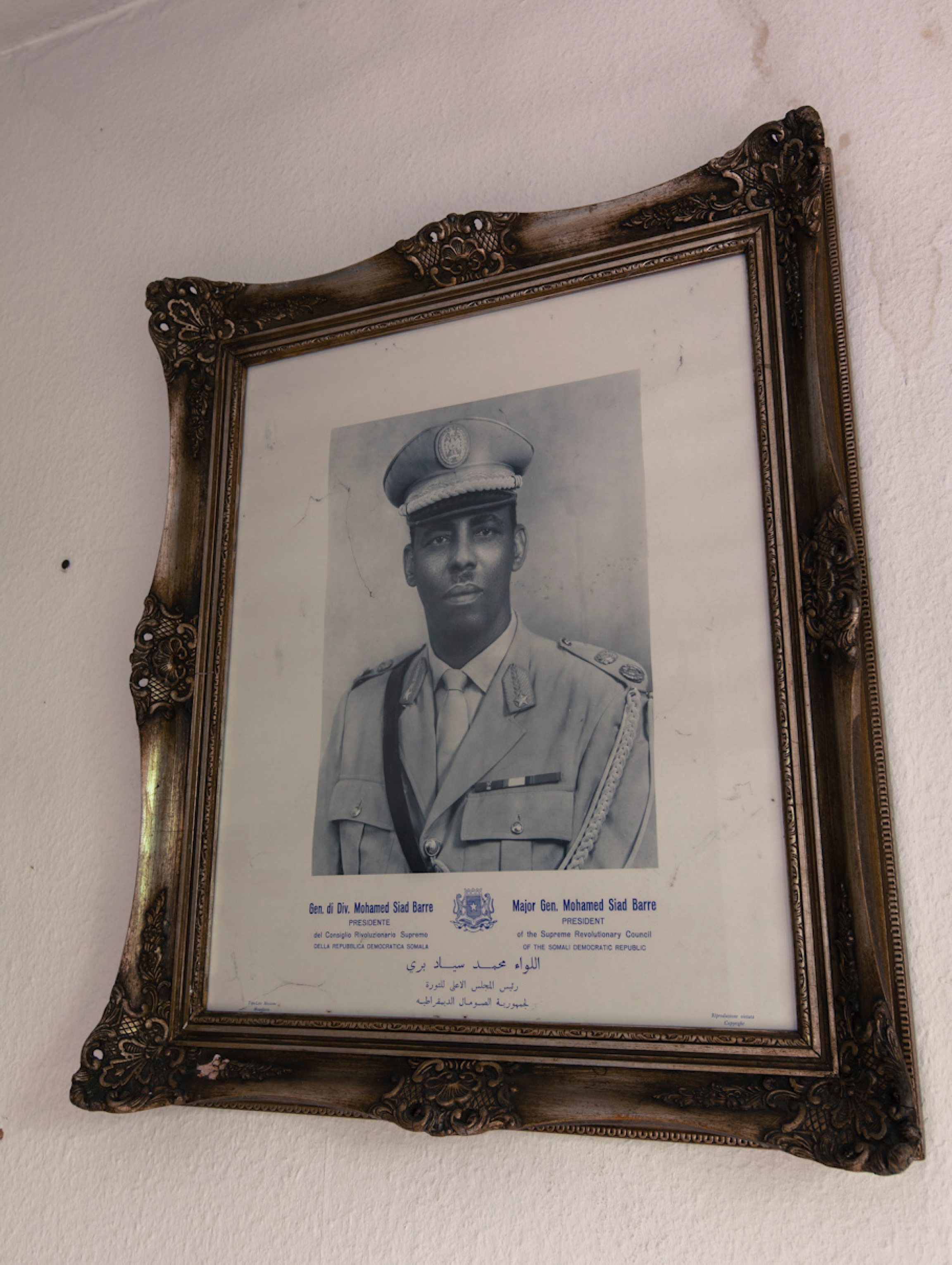 A vintage framed photo of General Mohamed Siad Barre of the Supreme Revolutionary Council of the Somali Democratic Republic.  Under Barre's regime, thousands of Isaaq Somalis were murdered in what was known as the "Hargeisa Genocide."

Lawyer Kathy Roberts and the CJA first filed Warfaa’s complaint in the US in 2004 on Warfaa’s behalf under two laws — the Alien Tort Statute (ATS) and Torture Victim Protection Act of 1991 (TVPA).

But his case has been beset by legal difficulties, leading to years-long delays, most recently due to Supreme Court rulings that have made it harder to bring such cases in recent years.

Ali’s lawyers have argued that US courts do not have jurisdiction and that he was immune from prosecution because of his job in a foreign government. US judges denied him immunity in 2014.

Warfaa’s lawyers have also struggled with US Supreme Court decisions about ATS cases.

The ATS was written way back in 1789 to address piracy and other perils overseas. Under the law, US federal district courts have jurisdiction over suits by noncitizens for torts — or civil wrongs — in violation of international law.

The largely forgotten law was revived by legal activists in the 1980s and was used successfully to bring cases involving torture, mass rape, executions, war crimes and other atrocities committed overseas.

In 2013, the Supreme Court ruled that it could only be used in cases that “touch and concern” the US, making it useless for cases between one foreigner and another. But in 2018, the court stopped ATS suits against foreign corporations.

Warfaa’s claims of abuse under the ATS were dropped as a result of the Supreme Court decision to limit the use of the ATS, but he was still able to bring his case under the Anti-Torture Act, which US Congress passed in 1992, Roberts said.

“Even without the benefit of claims under the ATS, our case against Col. Tukeh represents an important step” toward justice, Roberts added.

William Dodge, a law professor at the University of California, Davis, School of Law, commented on changes to the law.

“Things looked promising for human rights victims [who used the ATS in the 2000s]. ... But since then, the court has nibbled away at the right to sue so that today there is very little left.”

“Things looked promising for human rights victims [who used the ATS in the 2000s], Dodge said. “But since then, the court has nibbled away at the right to sue so that today there is very little left.” 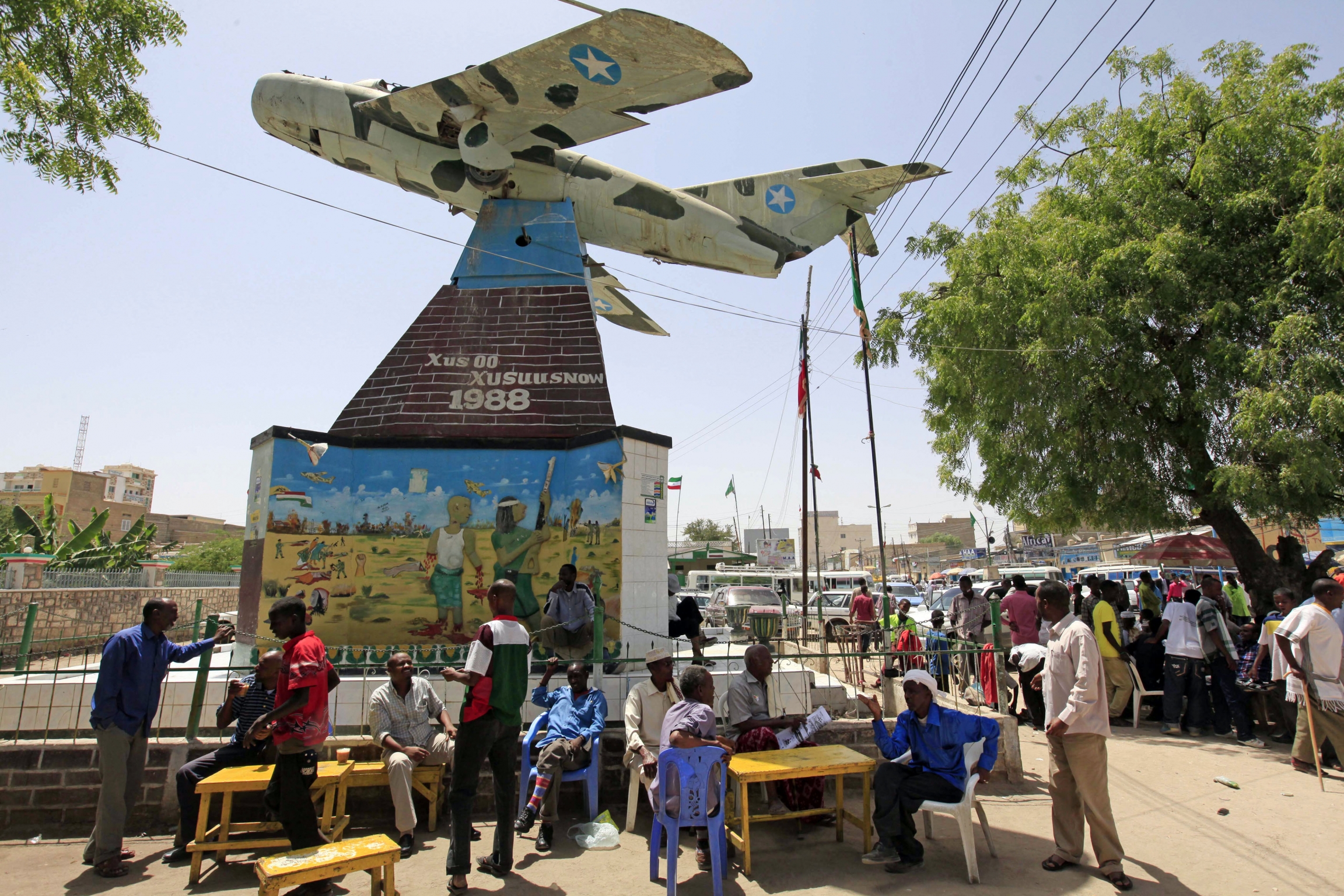 Residents of Somaliland sit under a war memorial of a MiG fighter jet in the center of town in Hargeisa, May 19, 2013. The memorial was set up to commemorate Somaliland's breakaway attempt in the 1980s and is a symbol of struggle for the people of this province.

The meaning of justice

Roberts, one of Warfaa’s lawyers, said his trial was about more than events in Gebiley.

After all, the case is civil, rather than criminal, and Ali will not go to jail if he loses. But defendants in similar civil cases have been ordered to pay millions of dollars in damages.

This case is very different from the big international war crimes trials of suspects like Slobodan Milosevic, the former Serbian president, or the Liberian rebel leader Charles Taylor, which took place in The Hague.

But, Roberts said, “victims and survivors of the Somali government’s abuses, like Farhan Warfaa, deserve justice.”

“The upcoming trial will not only give Warfaa his day in court, but it will also provide him with the opportunity to shed a light on, and prove, some of the historical record of the abuses that he and people like him suffered at the hands of the Somali National Army.”

“The upcoming trial will not only give Warfaa his day in court, but it will also provide him with the opportunity to shed a light on, and prove, some of the historical record of the abuses that he and people like him suffered at the hands of the Somali National Army.”

Back in May 1988, then-president Barre sent aircraft and troops to the SNM stronghold of Hargeisa and reduced the city to rubble — an event that has been dubbed the “Hargeisa Holocaust.”

Barre’s forces committed torture, rape and butchered as many as 200,000 Somalis — mostly Isaaq clansmen and opposition leaders — in the country’s northwest.

It backfired. Barre’s opponents teamed up and Somalia collapsed into the chaos of a civil war that drags on to this day.

Somaliland, a northwestern breakaway region, is relatively stable now. Warfaa, a shop owner, lives in Hargeisa with his family and has become a respected clansman who resolves local disputes.

At the trial, Warfaa will give evidence, supported by the testimonies of four eyewitnesses, doctors and a former US envoy to Somalia.

Ali denies all acts of attempted extrajudicial killing and torture.