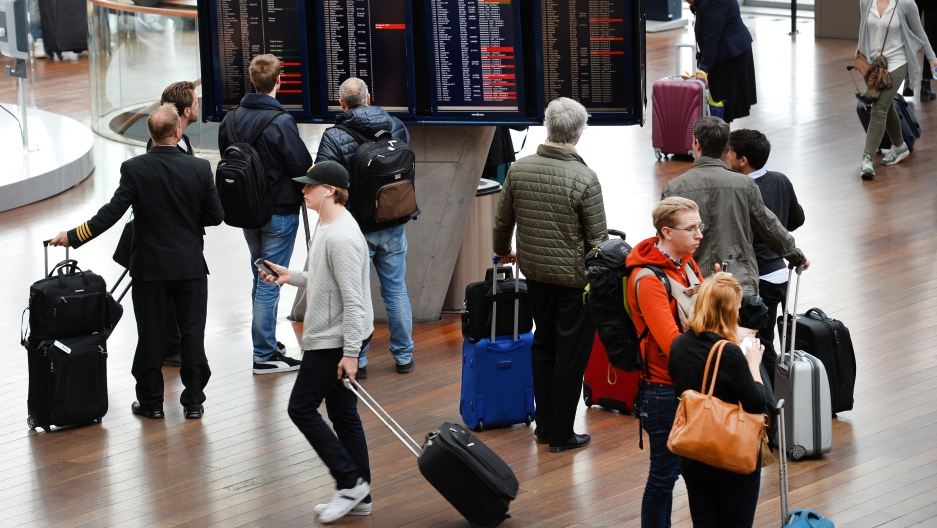 Travelers wait for their flights to leave from Arlanda airport in Stockholm, Sweden, May 19, 2016. The flygskam, or "flight shame" movement has recently encouraged Swedes to turn to trains instead of planes to reduce their carbon footprint.

Planes, trains and automobiles? For Swedish climate activists, only the trains will do.

And while Thunberg is among the most well-known of Swedish climate activists, she is just one of many Swedes who regularly opt for train travel instead of often quicker plane flights.

The Swedish movement of flygskam, or “flight shame,” has brought awareness to the toll air travel has on the environment. According to a 2013 study, air travel has the “biggest climate impact per distance travelled,” while carpooling, bus rides and train travel are greener alternatives.

In Sweden, flygskam has also given way to tagskryt, or "train bragging."

But the ability to make eco-conscious travel choices may be a luxury that does not apply easily across countries. For example, the US Federal Railroad Administration only brought train standards closer to those used in Europe last November.

And while Swedes earn at least 25 government-mandated days of paid vacation each year for full-time employment (plus holidays), the US Fair Labor Standards Act requires no paid vacation at all. This means even for Americans with access, many simply do not have time for lengthy train travel.

Tågsemester.nu, which gives out travel advice and tips for people trying to cut back on plane travel, is behind the movement to promote rail-only travel in Sweden.

“I started this Facebook group because I wanted to make it easier to go by train to other countries,” said Susanna Elfors, who heads up the site. Elfors spoke with The World's Carol Hills about turning to trains to combat climate change.

Elfors says that a no-fly commitment picked up in Sweden after Greta Thunberg's mother, Malena Ernman, a well-known opera singer, announced that she would stop flying.

“And when she said, 'No, I am not flying anymore,' people thought, "Oh, if she can do that, I can also stop flying,"" Elfors said. “Some famous people after her also told her that, 'I am not going to fly.' And then the people started to change the travel habits, and it became shameful to go by plane because it's so devastating for the environment and for the climate.”

Susanna Elfors: Yeah, that's the opposite of flygskam. Tagskryt is train bragging.

Do you engage in tagskryt yourself?

Yeah, I think so, and especially people in the group do because they show pictures from their train trips and so on and then they got a lot of likes.

Your Facebook page for Tågsemester is quite active, about 80,000 users. What kinds of rail-only travel advice and tips get shared on that?

Everything. But it's much like: How do I go to Barcelona? How do I go to Greece? And so on. But there are also other kinds of questions. How can I change trains in a certain city? What kind of restaurants do they have at the station? How could I bring a dog on a train? How do I bring my wheeling chair? Vegan food? Etc. So, there are so many different questions.

Are you involved in sort of encouraging more high-speed rail and linking up trains and making long trips more possible?

Yeah, kind of. We have changed the situation. In Sweden, the government has decided to put their foot on the night train lines to Europe, and they say it's because of the Facebook group. It was not our intention, but the politicians are now listening and they're very interested to discuss with us.

There's literally been a spike in rail travel in Sweden since these various efforts, including yours.

Yes. So, it has increased; so, they have been putting in new departures because the interest has increased here in Sweden, and also the domestic flying has decreased. So, it's really changing.

What about the serious issue behind all this, which is climate change and combating climate change? How serious are you about helping in that effort?

Quite serious. I worked with the sustainability and environment issues for all my adult life. But I am mostly working with housing and how to make the residential areas more sustainable. So now changed focus a bit to traveling, and I think it's a good opportunity because it's very easy for a person to really reduce their climate impact by changing their travel habits.

This interview has been edited and condensed for clarity. Brandi Fullwood and Indra Ekmanis contributed reporting.