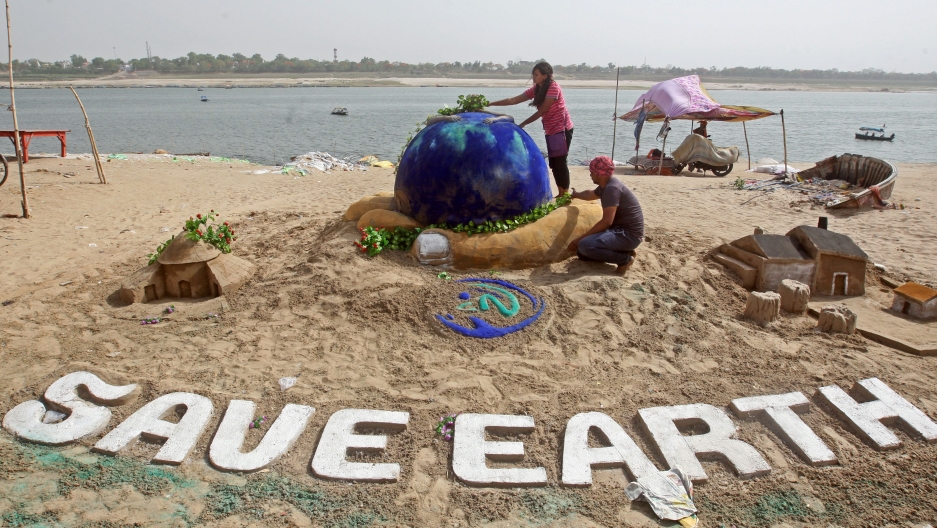 Students make a sand sculpture on Earth Day, on the banks of the river Yamuna in Allahabad, India, April 22, 2018.

Every April 22 since 1970, we celebrate Earth Day. And since that first Earth Day, the water in the US is cleaner and local air less polluted, but carbon pollution of the planet's entire atmosphere has gotten worse and is changing our climate.

The leadership the US government once showed on the climate crisis has almost vanished, as President Donald Trump vows to pull the country out of the landmark Paris Climate Agreement of 2015.

Jonathan Pershing, who led the US delegation to the UN climate negotiations during the Obama administration and is currently the program director of environment at the Hewlett Foundation, says the cost to the US in terms of moral leadership is immense.

“The world is very clear about its own collective recognition of the severity of the problem. ... The United States actually turns out to have impacts that are significant, but they are dwarfed by the impacts that are faced by others.”

“The world is very clear about its own collective recognition of the severity of the problem,” Pershing says. “The United States actually turns out to have impacts that are significant, but they are dwarfed by the impacts that are faced by others.”

In Bangladesh, for example, one foot of sea level rise will likely force 10 million people to flee the coastal regions. In Latin America, climate change is already leading to declines in agricultural productivity, loss of jobs and an increase in migration, often northward to the US.

“These countries look at the US and say, ‘You are one of the reasons we are being forced to leave,’” Pershing says. “‘You, with your significant emissions — if you curtailed them, we’d have a much more promising future. Why aren't you leading? We rely on you, as a major partner in the global community, as a leader, to do just that.’ When [we] back away, that has moral consequences, it has diplomatic consequences, it has consequences in terms of how people perceive us, not only in this arena but in much wider arrays of climate and foreign policy.”

Other big emitters, like China and India, face a difficult transition away from dependence on carbon-heavy coal but are making big progress on renewable energy deployment. China is taking climate change quite seriously, Pershing says.

“The government is run by a group of people who see the science as not only credible but as urgent,” he says. “[They] see impacts around their nation as being both immediate and far-reaching, [they] have designs on the future [and they view] technology development and protecting the nation against some of the worst impacts of climate as being consistent with their vision of the future.” 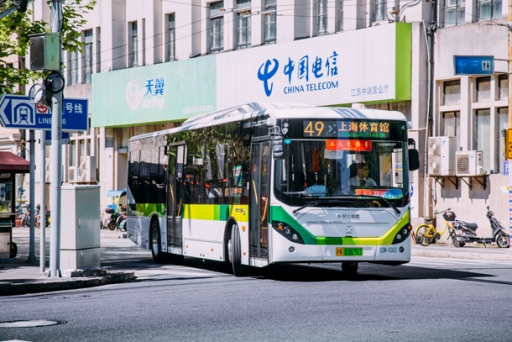 The city of Shenzhen, China, has the largest concentration of electric buses in the world. The transition to electric has helped reduce both smog and noise pollution.

Unlike the US, China has decided to go all-in on electric vehicles, Pershing notes. Transportation — primarily cars and trucks — is responsible for about a quarter of global greenhouse gas emissions and China is leading in trying to reduce them.

The city of Shenzhen, for example, has about 17,000 buses, compared to New York City, which has about 9,000. All 17,000 of Shenzen’s buses have been electrified in the last three years.

China’s policies have also been the single largest reason for global growth in renewable energy, Pershing adds. At the same time, Chinese energy demand has been growing. So, instead of retiring coal and replacing it with solar or wind, they have simply added renewables to the existing mix.

Related: Is China really stepping up as the world's new climate leader?

Where the US has replaced coal, we have done so more with natural gas — which emits carbon — than with renewables, Pershing says. For this reason, our overall emissions have not declined much. In fact, in the last couple of years, they have been inching back up, which Pershing believes is a “daunting prospect,” given the rate of change required to solve the climate problem.

China’s emissions also rose, despite their efforts to rein them in. Since the US and China are the two largest greenhouse gas emitters in the world, both countries must figure out how to change these trends or the world has only a slim chance of meeting its goals, Pershing says.

India is committed to an energy future without coal but also faces increasing demands from millions of people who still live without electricity. “They're seeing the need people have as they try to electrify the economy, so a great deal of what India has done has been additive,” Pershing explains. “We're not really seeing retirements of coal. As a consequence, Indian emissions have not gone down. They're going up.”

On a per capita basis, however, India's emissions are still about one-seventh the size of the United States', Pershing notes.

Land use also contributes to a huge share of global emissions, and changes in land use are urgently required to avoid the damages of climate change, Pershing adds. The Obama administration analyzed ways the world could achieve an 80% global reduction by the year 2050. Almost one-third of that effort would have taken place in the US from changes in land use and forestry.

This means slowing and halting deforestation; using cover crops that are modified to be more CO2 absorbent; tilling the soil in a way that sequesters carbon, instead of releasing it into the atmosphere; and adding forest lands, with trees that “act like giant sponges in the atmosphere.”

Globally, the same applies, Pershing says. We need to stop deforestation in Brazil and Indonesia and we have to manage the increase of agricultural lands and the increase of forest lands.

Nearly 50 years after the first Earth Day, much has been accomplished, but much more needs to be done, Pershing believes.

“I think we've made some huge progress in some places around local pollutants. ... We've cleaned up a great deal of the US waterways; we have much better air than we had back then, although it's getting worse again. We’re much better on things like mercury.”

“I think we've made some huge progress in some places around local pollutants,” he says. “We've cleaned up a great deal of the US waterways; we have much better air than we had back then, although it's getting worse again. We’re much better on things like mercury.”

“But some of the other big problems? Not looking too good,” he emphasizes. “The climate change problem, the biodiversity problem, where we're seeing a loss of species — those problems are very big. … I would like us to recommit ourselves not only to the local things we've begun to tackle but to the big, new, global issues that we must also tackle if we're to have a life we'd like for our children and our grandchildren.”