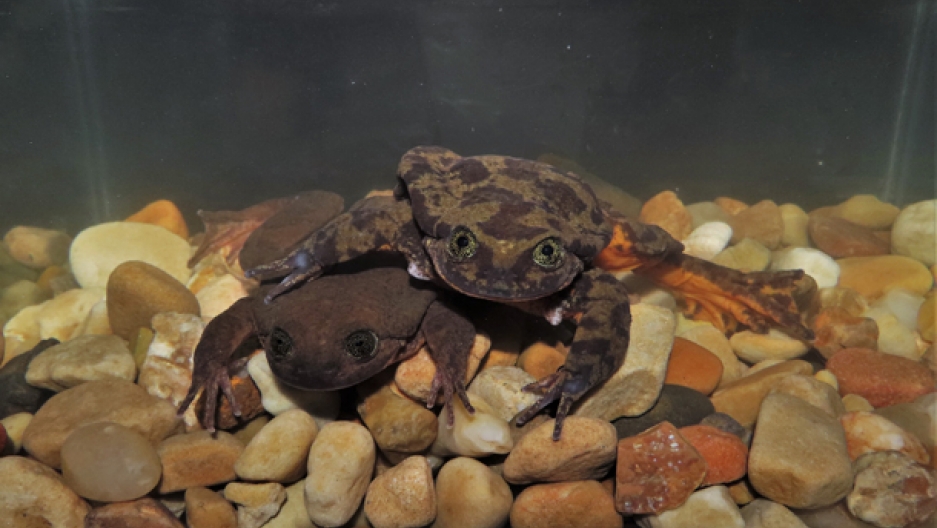 Romeo and Juliet — two of only five Sehuencas frogs known to exist. Their match gives hope to a species that was on the brink of extinction due to destruction of its habitat and the deadly disease chytrid fungus.

Courtesy of the K’ayra Center for Research

Sehuencas water frogs, like other amphibians, have been devastated by the chytrid fungus. A frog that scientists named “Romeo” was the last known of his kind and had stopped singing for a mate. But recently, scientists discovered “Juliet” and four other Sehuencas water frogs hiding in the Bolivian cloud forest — and Romeo’s song is back.

Sofia Barrón Lavayen, the manager of captive breeding at the K'ayra Center at the Museum of Natural History in Cochabamba, Bolivia, says Romeo had been alone in the center since 2009, so she created and led the project to search for a mate.

“That's how we found Juliet, in December 2018, and that's how they are together now,” Lavayen said.

With the hope the two frogs won’t be star-crossed lovers, like their namesakes, the researchers are now breeding Romeo and Juliet in an attempt to save the species. But, as with many romantic situations, the conditions for Romeo and Juliet have to be just right for the relationship to succeed.

“First, it's really important for amphibians that the water quality has to be perfect,” she explained. “All the parameters have to be perfect for the species. Why? Because this species, the Sehuencas water frog, is an aquatic frog. They breed and exchange all the ions through the skin. That’s why the water is so important.”

The temperature has to be perfect, too, Lavayen adds. And then, because all amphibians around the world use rain as a signal that breeding season has arrived, the team had to install a rain system in the water. “So ... first, we prepared, and then we put them together,” Lavayen said.

“When we put Romeo together with Juliet, we recorded the first [courtship] call. Romeo called for the first time for a mate. It was really amazing. It's super loud, and it's the first recorded call for this species.”

On the frogs’ first “date,” Lavayen and the whole team was “super excited,” she said. “When we put Romeo together with Juliet, we recorded the first [courtship] call. Romeo called for the first time for a mate. It was really amazing. It's super loud, and it's the first recorded call for this species.”

Related: In the Caribbean, queen conches are living on the edge

Lavayen says Romeo looked a little bit nervous in the beginning, but then swam directly to Juliet to perform amplexus, the mating embrace position for frogs.

“He swam really fast to her and he started also doing a really funny dance we call the twinkly toes. ... He was shaking his toes while he was in amplexus. That was also something new for us.”

“He swam really fast to her and he started also doing a really funny dance we call the twinkly toes,” Lavayen said. “He was shaking his toes while he was in amplexus. That was also something new for us.” 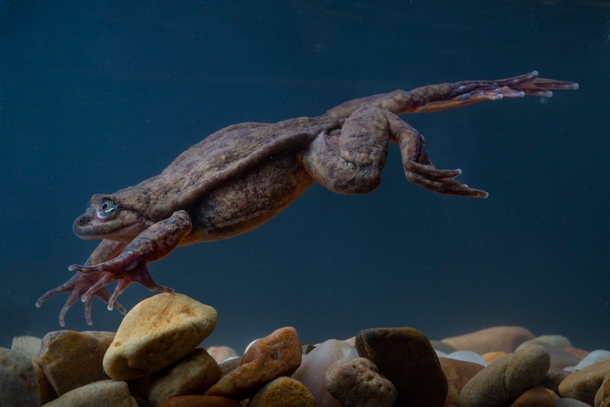 Juliet has proven to be healthy and outgoing. Researchers are hopeful that she and Romeo will be able to reproduce.

Since their first date, the two frogs have continued trying amplexus, Lavayen says, much of the time for about 15 minutes, which is fairly typical for amphibians.

“I hope they are going to lay eggs soon,” she said. “I'm really excited to see the eggs because we don't know how many eggs they [make]. We [also] don’t know where they put them, where they lay the eggs — under the rocks or between rocks or just in the surface of the aquarium. We don't know. It’s something new for us.”

If Romeo and Juliet don't get along romantically, Lavayen says the team has other options, now that they’ve found more Sehuencas water frogs.