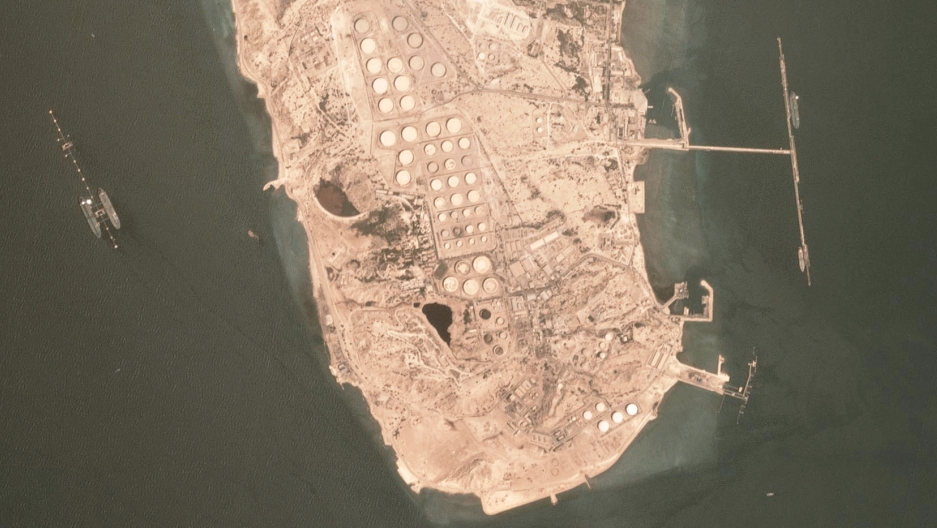 Very Large Crude Carriers (VLCC) "supertankers" can be seen loading on the sides of the Kharg Island oil export terminal in Iran.

Pushback against the US began minutes after Secretary of State Mike Pompeo announced on Monday an end to waivers that permit some countries to purchase oil from Iran. China, India, Japan, South Korea and Turkey had been allowed to continue purchasing Iranian oil after the Trump administration banned imports of Iranian oil in November 2018.

Turkey’s foreign minister was first to tell the US to mind its own business.

The #US decision to end sanctions waivers on #Iran oil imports will not serve regional peace and stability, yet will harm Iranian people. #Turkey rejects unilateral sanctions and impositions on how to conduct relations with neighbors. @StateDept @SecPompeo

The next day, a spokesperson for the foreign ministry of China warned the Trump administration against intruding on its trade relationship with Iran.

Foreign ministry spokesman Geng Shuang said that the “US implementation of unilateral sanctions and its so-called long-armed jurisdiction” would intensify turmoil in the Middle East and the international energy market https://t.co/WdDrkPjUJ7

In February and March, as the expiration date of waivers approached, Iran was exporting roughly 1.3 million barrels of oil each day. To avoid detection after the May 1 deadline, Iranian tankers may resort to "cloaking" — switching off the onboard transponders that identify a ship’s position, heading and other important data. This happened last fall when sanctions were first imposed by Washington.

“Over 80% of [traffic] was cloaked for a good, long time,” says Samir Madani, the co-founder of TankerTrackers.com, a maritime research firm that watched oil tankers go dark after they left Iranian ports. “It would take weeks, sometimes, for a vessel to reappear. You would see it disappear in the Persian Gulf, and then you’d see it reappear in the Strait of Malacca. So, it actually traveled for two weeks without even transponding at all.”

Iran’s oil exports have dropped to about 1 million barrels per day (bpd) from more than 2.5 million bpd prior to the re-imposition of sanctions. In a briefing Monday, Pompeo said, “We’re going to zero across the board,” adding the United States had no plans for a grace period for compliance beyond May 1.

The White House intends to deprive Iran of its lifeline of $50 billion in annual oil revenues, Pompeo said, as it pressures Tehran to curtail its nuclear program, ballistic missile tests and support for conflicts in Syria and Yemen.

Madani spoke with The World about Iran’s oil exports as the May 1 deadline looms, and how the threat of US sanctions may play out with Iran's oil customers.

"The top importer is China," Madani says. "The largest proportion goes to China from Iran. After that comes India, South Korea, Japan and Turkey."

Marco Werman: So I have to believe, Samir, that these countries must have seen this coming: the end of the waivers. Has that affected the amount of oil shipped from Iran in recent weeks? What have you seen?

Samir Madani: A very big rush in March, because of the fact that this window is about to close. A lot of oil was moved, and we have tracked 1.9 million barrels [per day].

Secretary of State Mike Pompeo said that the loss of Iranian oil will just be offset by other oil-producing countries. Is it really that simple? And do these countries have the capacity to replace the oil lost from Iran?

They do. But it might be a bit of a stretch to say that it's going to go all the way to zero. So right now we don't think that it will go to zero. We think it could go down to, for instance, one million barrels per day, and, if need be, it could all be going to China at the end of the day. And China, which will not be using any of the US banking systems and will have some other set up in place for Iran, may continue just importing Iranian oil at a better rate.

Iran will still be exporting 1 million barrels a day?

So how hurt will Iran be at the end of all this?

I can't imagine that they will be particularly crippled to the extent that the State Department has been conveying messages like, "OK, we're going to bring it down to zero, and then they're going to have to come to the negotiating table." I don't think that's likely if China keeps giving [Iran] this lifeline.

So you watch oil shipments in real time, Samir. You'll know whether Iran is still exporting oil after May 2 and whether China thumbs its nose and continues to import Iranian oil. What do you think is going to happen? What do you expect?

I'm curious to see, as well. But I do believe that we'll still see shipments even if they don't have a destination, initially. It may take weeks before we can actually say "OK, half a million to a million barrels is going here or there." But our biggest educated guess right now would be a continuation to China and possible escalation.

So you'll see the oil leaving Iran, but you won't know exactly where it goes until it gets there, correct?

If they continue to leave their transponders off. It might be that they work out something with China, and China works it out with the US, and then all of a sudden they're still pinging.