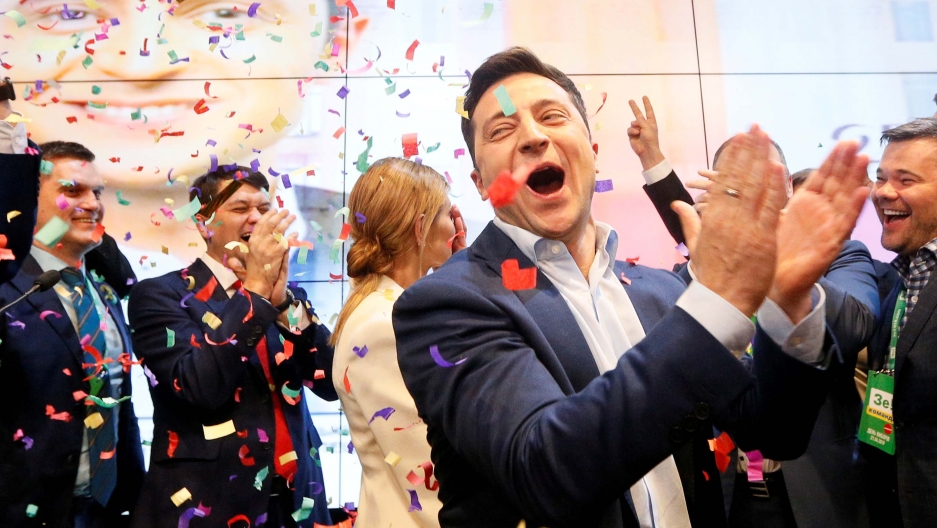 Life will imitate art as Volodymyr Zelenskiy, a comedian who played president on TV, is set to become Ukraine's president in real life next month. Zelenskiy was elected in a landslide victory in Sunday's run-off election, garnering more than 70% of the vote against incumbent President Petro Poroshenko.

But Zelenskiy, 41, has no political experience and few detailed policies. Many analysts see his victory as a rejection of Poroshenko rather than an ideological commitment to a celebrity candidate whose campaign has been compared to that of US President Donald Trump. Ukrainian voters appeared fed up with the status quo and dissatisfied with unfulfilled promises during Poroshenko's five-year tenure.

Related: A struggling mining town in Ukraine looks to one of their own as leading presidential candidate

Poroshenko conceded the election to Zelenskiy soon after returns were announced. A country in transition since gaining independence from the Soviet Union in the 1990s, a peaceful transition of democratic power is important for Ukraine. But the country remains in an active war with Russia in the east.

Zelenskiy is the latest anti-establishment figure to unseat an incumbent, both in Europe and further afield. He has promised to end the war in the eastern Donbass region and to root out corruption amid widespread dismay over rising prices and sliding living standards. But he has not said exactly how he plans to achieve all that.

"I'm not yet officially the president, but as a citizen of Ukraine, I can say to all countries in the post-Soviet Union, look at us. Anything is possible!" Zelenskiy said. He is expected to take office next month.

Volodymyr Dubovyk, director for the Center of International Studies at Odessa Mechnikov University in Ukraine, spoke with The World about the impact of Zelenskiy's win.

"If you look at him absolutely unprepared, incompetent, having no clue as to ... what it takes to run the country, then it's [not] going to be really ... inspiring to anyone in the post-Soviet space.

"It depends on how you look at his success," Dubovyk said. "If you look at him absolutely unprepared, incompetent, having no clue as to what it requires, what it takes to run the country, then I don't think it's going to be really encouraging or inspiring to anyone in the post-Soviet space."

Marco Werman: Will he remain clueless? You're suggesting that because he has no experience he's going to fail, but is it possible that he succeeds?

Yeah, that's a great question. He might, and in fact, a lot of people — including myself — who didn't vote for him in this country, we are now kind of rethinking the whole thing and we are basically saying to each other now on social media and elsewhere that, well, he is our new president and actually elected by a landslide. It means something.

Maybe the biggest question right now is how Ukraine under Zelenskiy will fare vis-a-vis Russia. He said he's anti-war and doesn't want Ukraine to be fighting other countries, so what is his stance on the war in eastern Ukraine against Russia?

You're right indeed, Marco, it's a core question. We are in war with Russia. You can go into definitions and try to call it properly, but it is a war de facto. It's ongoing conflict — it's not even a frozen one. People are actually dying every day and there is shelling and there is mortar fire and stuff like that. So it's an open wound and I don't think that Zelenskiy has anything in the works or in his plans that will provide for a substantial change on the ground.

But hasn't he said that he wants Crimea back in Ukraine?

"[Crimea is] a nonstarter with Russia. ... What might be actually negotiated is Donbass ... an area which is basically under Russian occupation."

Oh yes, he did. Of course, he did. And that's, of course, a nonstarter with Russia because Russia wouldn't even entertain this idea and wouldn't sit down with Ukraine or anyone else on the subject of Crimea. What might be actually negotiated is Donbass, that part of Donbass which is beyond Ukraine's government control right now. That's an area which is basically under Russian occupation.

How has Moscow received Zelenskiy's win in Ukraine? What's the word from there?

"The election of Zelenskiy doesn't really change anything radically or dramatically in terms of Ukraine-Russian relations."

I think they're satisfied. I mean, there was no big secret they didn't like Poroshenko. There was no chemistry whatsoever between [Russian President Vladimir] Putin and Poroshenko. But at the same time, Putin refused to congratulate Zelenskiy today. Among other things, that might tell us that Putin doesn't want to congratulate him, to validate some of those theories that Zelenskiy is pro-Russian, because the moment Putin calls Zelenskiy to congratulate him with his win, a lot of people in Ukraine will say, "Look, see? Putin is calling him. That must mean that Zelenskiy is pro-Russian." So, it's really a big game there. But we've been through this game for years and years, and definitely for the last five years. So, therefore, the election of Zelenskiy doesn't really change anything radically or dramatically in terms of Ukraine-Russian relations.

Reuters contributed to this report. This interview has been edited and condensed for clarity.