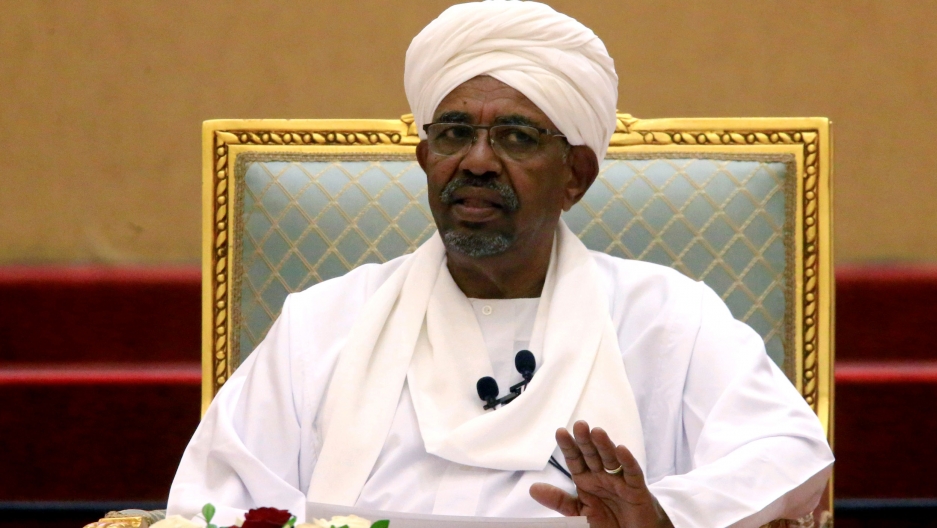 Omar al-Bashir addresses a meeting at the Presidential Palace in Khartoum, Sudan, April 5, 2019.

With protests continuing on the streets, family sources of deposed former Sudanese President Omar al-Bashir, said on Wednesday that he has been moved to Kobar prison in Khartoum from the presidential residence. Reuters additionally learned from a prison source who said Bashir was being held under tight security in solitary confinement.

Sudan's military ousted Bashir after weeks of mass protests that climaxed in a sit-in outside the Defence Ministry compound. Protests are continuing and their leaders say the unrest will not cease until the ruling Transitional Military Council (TMC) hands power to a civilian-led authority ahead of elections.

The Sudanese Professionals' Association (SPA), leading the  revolt, has called for sweeping change to end violent crackdowns on dissent, purge corruption and cronyism and ease an economic crisis that worsened during Bashir's last years in power.

In initial steps to tackle corruption, the TMC ordered the central bank to review financial transfers since April 1 and to seize "suspect" funds, state news agency SUNA said on Wednesday.

SUNA said the TMC also ordered the "suspension of the transfer of ownership of any shares until further notice and for any large or suspect transfers of shares or companies to be reported" to state authorities.

Bashir, 75, had been detained under heavy guard in the presidential residence inside the compound that also houses the Defense Ministry, before being shunted to Kobar prison late on Tuesday, the family sources said.

At least some political prisoners have been freed since Bashir's overthrow, including several SPA figures.

Awad Ibn Auf, an Islamist like Bashir, initially headed the TMC before stepping down after one day in the post. Abdel Fattah al-Burhan, who has engaged in impromptu dialogue with protesters in the streets of the capital, now heads the council and has promised to hold elections within two years.

The Sudan People's Liberation Movement-North, a rebel movement in the southern states of Blue Nile and South Kordofan, announced it was ceasing all hostilities until July 31 as a "goodwill gesture" following Bashir's overthrow.

SPLM-N leader Abdelaziz Adam al-Helew, in a statement conveyed to Reuters in Khartoum, said the move was to help facilitate "the immediate and smooth handover of power to civilians" in Sudan.

The SPLM-N had sought to overthrow Bashir and is seeking autonomy for Blue Nile and South Kordofan and a redistribution of wealth and political powers in the country.

Bashir ruled Sudan with an iron hand for 30 years after seizing power in an Islamist-backed military coup.

Uganda will consider offering asylum to Bashir despite his indictment by the International Criminal Court, a foreign affairs official said in Kampala on Wednesday.

"Uganda would not be apologetic at all for considering an application by Bashir," Okello Oryem, Uganda's state minister for foreign affairs, told Reuters.

Bashir faces ICC arrest warrants over accusations of genocide and crimes against humanity in Sudan's Darfur region during an insurgency that began in 2003 and led to the death of an estimated 300,000 people. He denies the allegations.

The head of the TMC's political committee, Omar Zain al-Abideen, said on Friday the council would not extradite Bashir for trial, suggesting he could be tried in Sudan instead.

Oryem said Bashir had yet to contact Kampala for possible refuge, but added that there was no harm in considering the fallen Sudanese leader for political asylum.

In The Hague, an International Criminal Court spokesman declined comment "on hypothetical situations". ICC member states, which include Uganda, are legally obliged to hand over indictees who enter their territory.

Bashir has defied the ICC by visiting several ICC member states. Diplomatic rows broke out when he went to South Africa in 2015 and Jordan in 2017 and both declined to arrest him for extradition to the ICC in the Netherlands.

Ugandan President Yoweri Museveni has in the past criticized the ICC, describing it as a tool of Western justice against Africans, and he once vowed to mobilize African countries to pull out of the court's founding treaty.

On Tuesday, TMC chief Burhan fired Sudan's three highest-ranking public prosecutors after protesters demanded an overhaul of the judiciary as a step toward civilian government.

The SPA has called for the TMC to be dissolved in favor of an interim civilian ruling council with military representatives.

On Monday, the African Union's Peace and Security Council urged the TMC to hand power to a transitional civilian-led authority within 15 days or risk Sudan being suspended from the AU.

But a delegation from Saudi Arabia and the United Arab Emirates met Burhan in Khartoum on Tuesday, suggesting the TMC would enjoy support from powerful Gulf allies.

As chief of Sudan's ground forces, Burhan oversaw Sudanese troops fighting in the Saudi-led war in Yemen and has close ties to senior Gulf military officials.

The UAE, a leading member of the Saudi-led coalition fighting in Yemen, was quick to welcome Burhan's appointment and said it would look to accelerate aid to Sudan. Shortly after Burhan's nomination, Saudi Arabia said it would provide wheat, fuel and medicine to Sudan.

Additional reporting by Elias Biryabarema in Kampala and Anthony Deutsch in the Netherlands; Writing by Yousef Saba; Editing by Mark Heinrich.