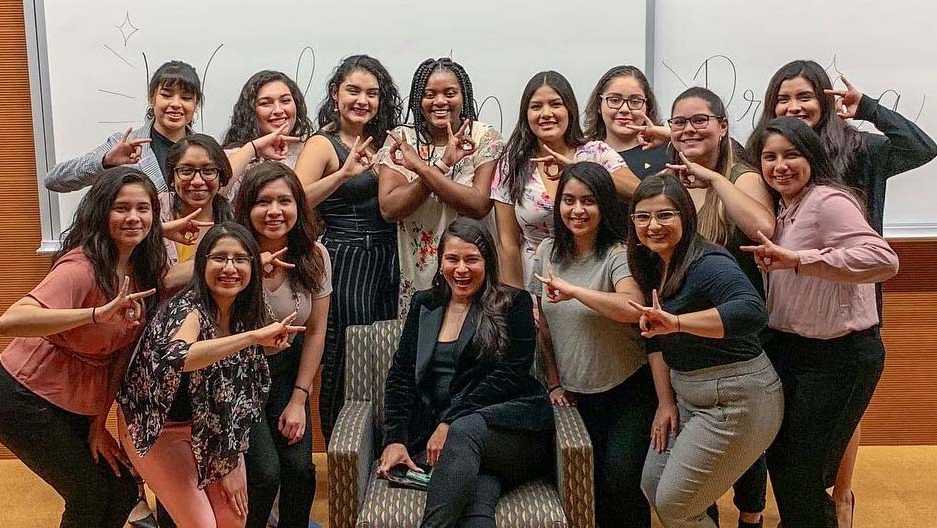 Latina Rebels founder, Prisca Dorcas poses with a group of Latina women: "When I speak to a room full of Latinas, young vibrant Latinas, I come alive. I want them to feel seen and to know they are not alone, while they have no clue that they keep me feeling seen and not alone, and that is priceless."

When Prisca Dorcas, founder of Latina Rebels, was in graduate school at mostly white Vanderbilt University in Nashville, Tennessee, frequent race-driven microaggressions made her feel isolated and confused. Without a physical place to vent her frustrations and find solidarity, Dorcas turned to Instagram in 2013 to create a virtual rallying ground.

What started with a group of 10,000 followers grew to a community of 120,000 from across the US. Latina Rebels has become a gathering place for Latinx women who self-identify as fiery, bold and unapologetic.

Dorcas is a writer, storyteller and performer who still calls Nashville home. Via Instagram, her team is helping define what it means to be a Latina in the US today — sparking debate about hot button issues, documenting their experiences and providing Latinx activists a platform to share their work.

For this group, memes, quotes and cartoons aren’t pointless internet blips — they are images with cheekily written script that take on issues like border debates, immigration reform and the changing demographics of US politics, which are becoming ever more diverse.

Related: The women who made history in this year's midterm elections

The Latina Rebels are masters at curating social media posts that inject humor or perspective into otherwise contentious topics. But, as Yareliz Mendez-Zamora, a follower-turned-contributor, explained in an email, “The simplicity of a lot of memes serves not only as an educational tool, but also a stress reliever.”

Mendez-Zamora, who lives in Miami and works as a community engagement specialist, found Latina Rebels while looking to connect with other millennial Latinas. She asked Dorcas to speak during her college’s Hispanic Heritage Month programming and became a regular contributor in 2014. 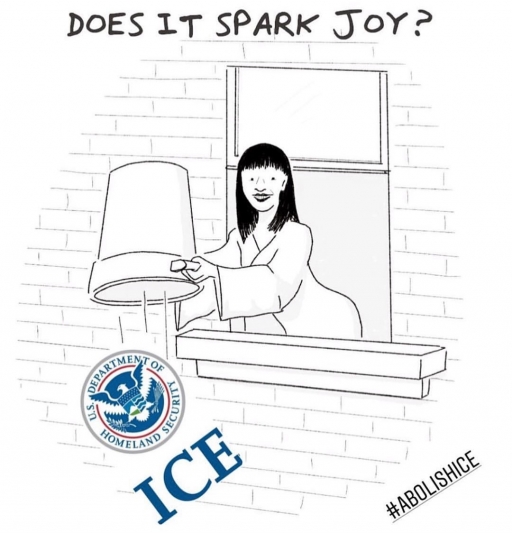 This post featuring a take on a piece by cartoonist Tommy Siegel plays off the popularity of decluttering guru Marie Kondo’s theory that whatever does not spark joy in one’s home (or life) should be thrown out. In this case, Immigration Customs Enforcement is being tossed out.

Melissa Guerrero, who joined the Latina Rebels team in 2018 after hearing Dorcas at speaking engagements, agrees that humor in the midst of so much negativity in the media and beyond is important. “While laughing [at the memes] I began to realize I was also learning a lot about the Latinx community and social issues I never thought about,” she said via email.

“Laughing is a part of health,” said Guerrero. “I don’t know anyone that isn’t full of anxiety, stress and the pressures of life on the daily. Even in the irony of some memes, people still laugh and I know it feeds our soul. … [B]eing able to provoke thoughts/feelings within seconds is important. There is so much information out there, it's drowning at times.”

Memes also provide brief respite or embody feelings about issues like border barrier fanaticism or Latinx political representation that can be difficult to put into words. 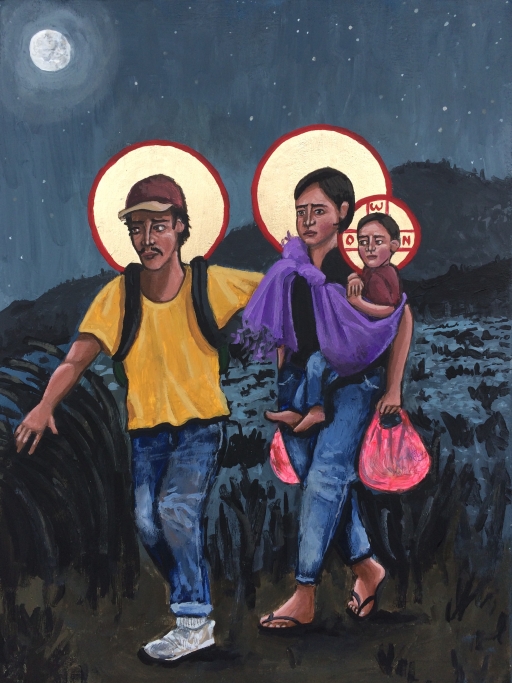 Dorcas posted the painting “Refugees la sagrada familia,” or “Refugees holy family,” when conversations about the northbound migrant “caravan” reached a fever pitch in December 2018. She says she wanted people to “understand migration through the lens of the Bible. … Everyone knows that Jesus was in the midst of migration when he was born, so I was trying to allow people to humanize these migrants as they humanize migration in biblical stories.”

Dorcas and her team embrace causes that focus on body positivity, sexual orientation, mental health, emotional well-being and more. By tagging, liking, sharing and commenting on other Latinx-centric Instagram handles, Latina Rebels’ fans have expanded their networks to include new Latinx creators, lobbyists, news and events.

Many of the posts share information about other Latinx organizations like BoldLatina, publicize community events such as the “Unapologetically Brown Series,” or help to connect followers in real life. 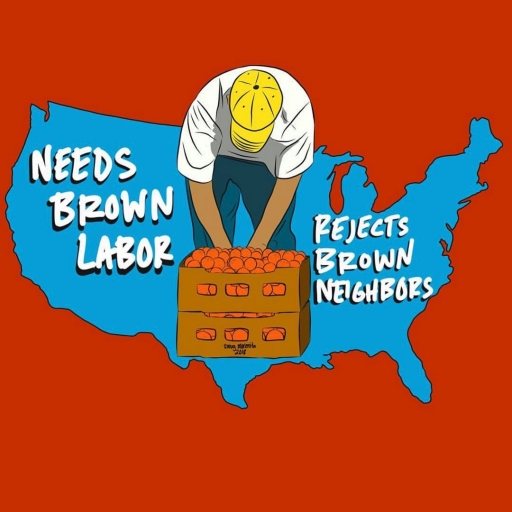 This post from January 2019 highlighting the artwork of visual artist smugmorenita homes in on the message that migrant workers have contributed to the US despite prejudices.

The comments sections are full of enthusiasm, pointing to a thriving community of what Dorcas calls luchadoras — female fighters.

“I read most of the comments and learn so much from our followers. We need to stay accountable for ourselves and a lot of times hold people accountable for what they have done,” said Guerrero.

Mendez-Zamora knows first-hand how meaningful accountability can be. One of her first posts was unintentionally transphobic, and the follower community was quick to explain the reasons behind hurt feelings. She embraced the dialogue and it has become one of her most meaningful exchanges.

“I am a troublemaker, I have curls, curves and revolutions inside of me. I am the daughter of revolutions, which means that I have la lucha in my blood and bones,” Mendez-Zamora said.

She says being involved in a distinctly Latinx organization is also important to her. “I needed something that spoke to me, that validated — in a way — my experiences. I was tired of following pages that did speak to my politics, but left out identity,” she said. 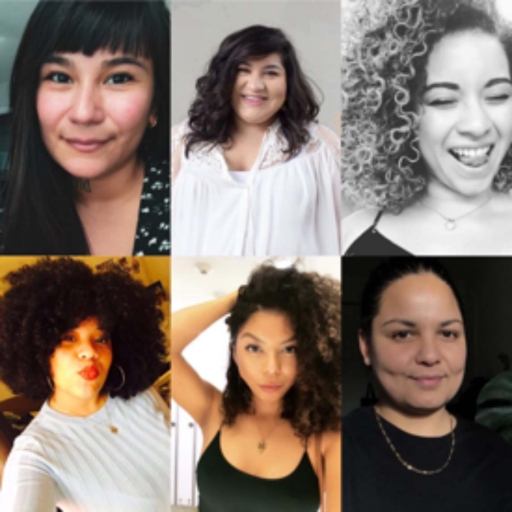 What started with a group of 10,000 followers grew to a community of 120,000 from across the US. Latina Rebels has become a gathering place for Latinx women who self-identify as fiery, bold and unapologetic.

Guerrero says she grew up in “what would be considered a black and brown ghetto,” but later moved to a very white state where she felt pressured to present herself differently. Latina Rebels has helped her reconcile difficult feelings about her Hispanic heritage.

“I posted about my experience growing up in a family that [was] heavily assimilated, I wasn’t taught Spanish, although I was taught to show hate towards my own people, it left me feeling guilty and ashamed,” Guerrero said.

Dorcas said she is proud she and her team of rebels are cultivating a space to be unapologetically Latina, female and of immigrant descent — and of how much they strive to bolster confidence among their tens of thousands of followers to do the same.

“We challenged traditional Latinx media to think broader and wider, to expand outside of white media,” said Dorcas. “I know it has challenged a lot of people with less access to start asking questions. We are in a time where conversations around liberation are becoming somewhat normalized, so I do believe that we have already impacted the world as we know it.”

It’s a unifying sentiment among the Latina Rebels. “My brown pride continues to rise, I think about how much of our Mexican culture my family let go of,” said Guerrero. “The fire inside me keeps me committed to living a life that is structured with the people and the land I come from, while making space for others.”

Editor's note: Kaitlin E. Thomas is a lecturer of Spanish at Norwich University and specializes in Latino pop culture.