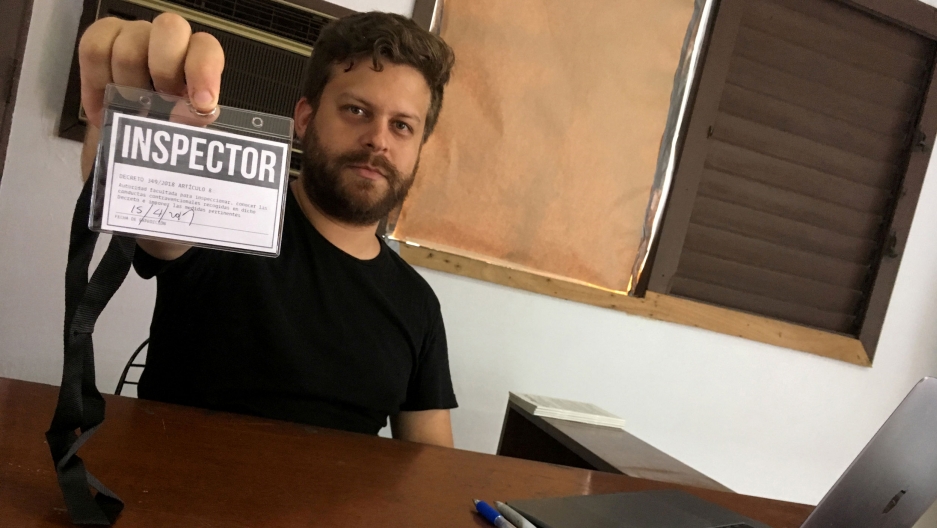 Cuban artist Leandro Feal holds a badge reading "Authority invested with power to inspect and recognize contraventions laid out in decree and impose pertinent measures," during the 13th Biennial in Havana, Cuba, on April 15, 2019.

A blustering bureaucrat fills a form out with your personal details and hands you a badge declaring you an inspector qualified to police Communist-run Cuba's cultural sector under a controversial new decree.

This interactive performance by Cuban artist Leandro Feal, 33, is one of the politically charged artworks in a parallel exhibit on the sidelines of Havana's 13th Biennial arts celebration that kicked off this weekend.

The exhibit underscores both simmering tensions in Cuba's arts scene and artists' growing independence from the state,  which has dominated all aspects of society since the 1959 revolution, including promoting culture.

The official biennial program of more than 300 works by artists from 52 countries is taking over Havana's museums, galleries and open spaces, including its seafront, until May 12.

Meanwhile, the parallel program of exhibits is sprawling — often in private studios and galleries — and reaches into the most remote neighborhoods.

The growth of tourism and the private sector over the past decade, as well as greater freedom to travel and Internet access, have enabled artists to work more independently of state institutions.

While most of these exhibits are not explicitly political, artists say the greater independence allows them to address politically sensitive issues more freely.

"The biennial, at the end of the day, is a kind of mirror of Cuban society where the independent scene is growing," said Abel Gonzalez Fernandez, 27, curator of the group show that includes Feal's performance and works by some of Cuba's top young artists, like Reynier Leyva Novo.

Some say Cuba's cultural institutions are ideologically outdated and too strapped for cash to promote them sufficiently. The so-called biennial, impressive as it is, was last held four years ago.

Gonzalez Fernandez and others believe the government last year introduced Decree 349 partly to rein them in. It gives inspectors the right to shut down exhibits and performances deemed to violate Cuba's revolutionary values.

The government says the legislation targets offensive and mediocre content. But it agreed in December to revise the accompanying regulations after broad outcry, and since then, it has not expressed itself again on the topic.

"They tried to impose a moratorium on the topic, but we have artists who are getting imprisoned," Feal said.

Self-proclaimed "artivist" Luis Manuel Otero Alcantara, who led a vocal campaign against Decree 349, was arrested on Friday after staging a small but politically charged performance in his neighborhood.

In the show, competitors carrying the flag of Cuba's old-time foe, the United States, ran a race, in homage to the Cuban who interrupted Havana's mass May Day march in 2017 by running in front of it waving the Stars and Stripes.

Otero Alcantara said he had been briefly detained a week earlier and warned not to stage his planned performance. He was released on Monday.

Asked about the arrest, the head of Cuba's National Council of Visual Arts, Norma Rodriguez, said at a news conference: "As far as I know he is an activist, not an artist."

Cuba considers dissidents to be mercenaries in the pay of the United States trying to subvert the government. A few other artists who have protested Decree 349 say they have also been harassed by authorities.

Some supporters of the Cuban government accuse activist artists of trying to boost their cachet or get offered asylum through altercations with the state.

A top cultural official, speaking on condition of anonymity, said Decree 349 had nothing to do with the biennial and described it as an inclusive event showing the work of several artists who had publicly criticized it.

Cuban artists who are critical of the government have often used the biennial — which attracts international collectors, gallery owners and critics — to raise awareness of the restraints on freedom of expression in Cuba.

"We are testing the limits of what's possible," said Gonzalez Fernandez.

Tania Bruguera, one of Cuba's most famous living artists, who has had frequent run-ins with authorities, said she would not participate in this year's biennial because the government was using it to "clean its international image in the wake of the campaign against Decree 349."