Venice's population has declined rapidly from roughly 175,000 after World War II to about 50,000 today. Remaining residents complain that their city is being overrun by tourists while they have to pick up the bill for cleaning and security.

Around 25 million tourists pour into the Italian lagoon city each year, of whom around 14 million spend just one day there. It has close to 8,000 Airbnb apartments catering for those who stay longer, soaking up the attractions around the canals. 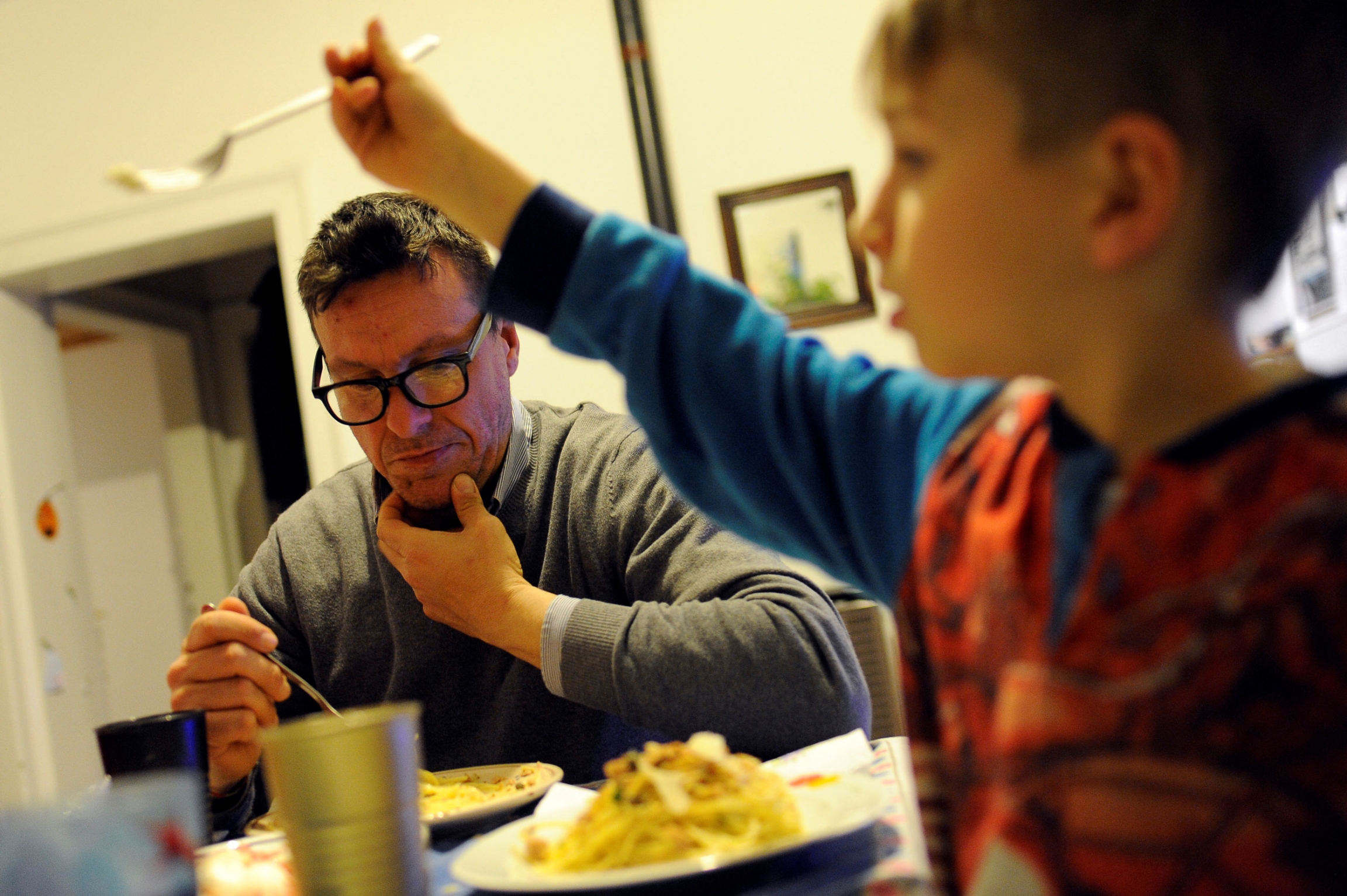 Spokesman of Social Assembly for the House (ASC) Nicola Ussardi, 41, eats dinner in his illegally occupied apartment in Venice, Italy.

Nicola Ussardi, 41, co-founder of a housing community group that helps Venetians find homes, has been squatting in an apartment in the Cannaregio district since 2013, with his partner Nadia and their two children.

He says many houses remain empty as people are forced to move out and then cannot afford the upkeep of the properties in order to rent them out — although the city housing authority says the activists are preventing the renovation of homes by occupying them. 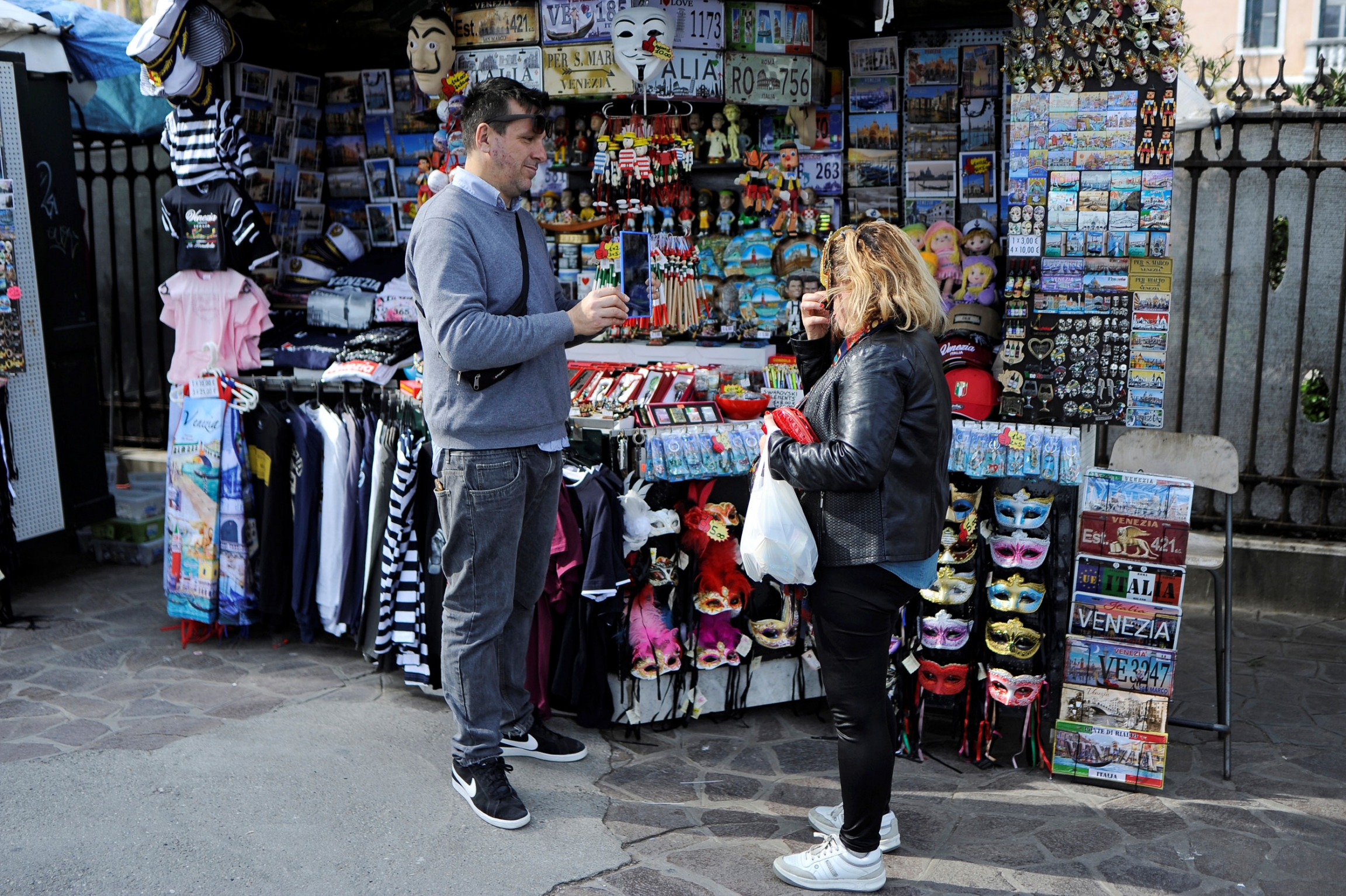 Nicola Ussardi helps a customer at a souvenir stand where he works near St.Mark's square in Venice. 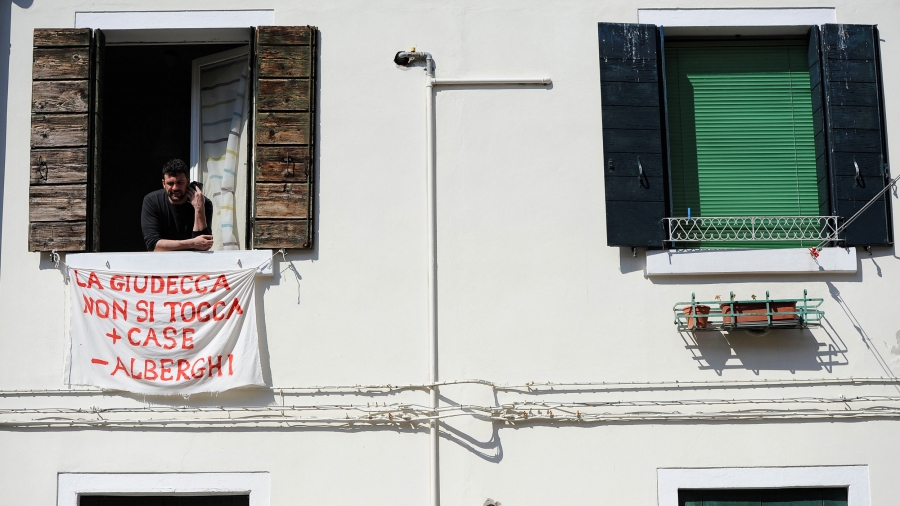 Alessandro Dus, 34, talks on the phone in his illegally occupied apartment in the Casette neighborhood in Venice. The banner reads "Don't touch the Giudecca. More houses, less hotels."

Alessandro Dus, 34, has been occupying an apartment for two years. 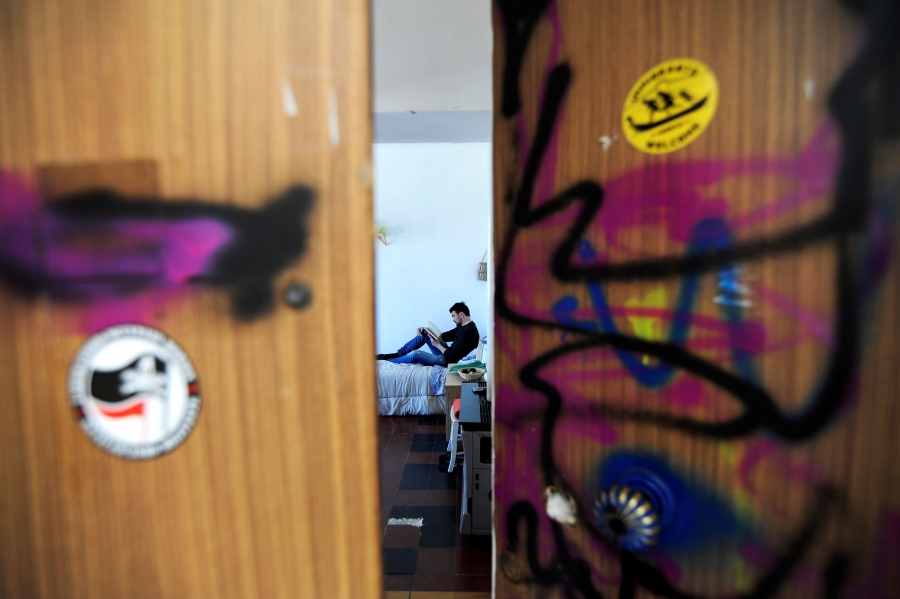 Alessandro Dus reads a book in his illegally occupied apartment. 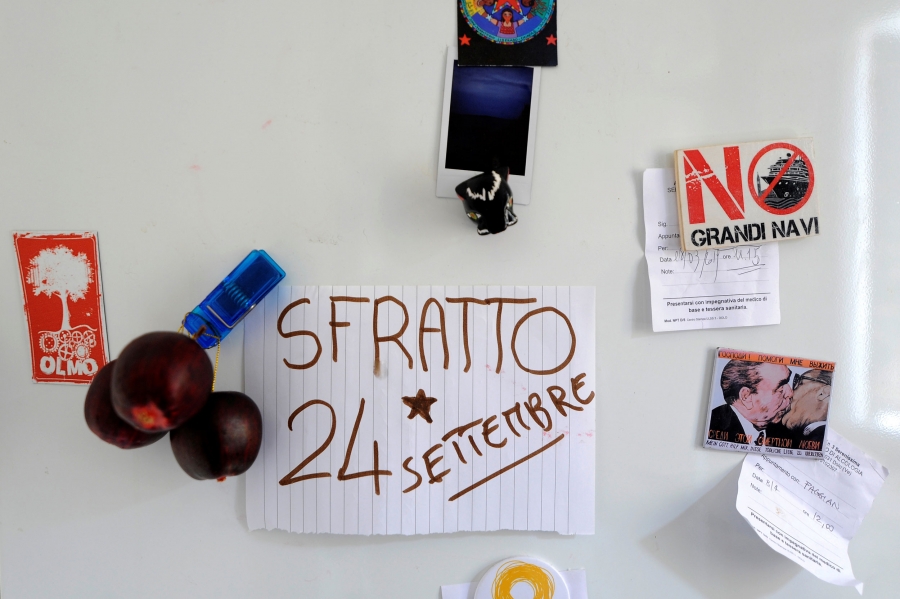 A note with the date of the next scheduled eviction is seen on the fridge of Alessandro Dus' illegally occupied apartment. "24th of September is the date they will come to try to evict me from the apartment. I need to be home when they arrive," Dus said.

Venetians do not want to end tourism — a huge revenue earner — but like many hotspots now looking to address the challenges from a surge in visitors, they are working out how numbers can be controlled and how locals might be able to stay in the city. 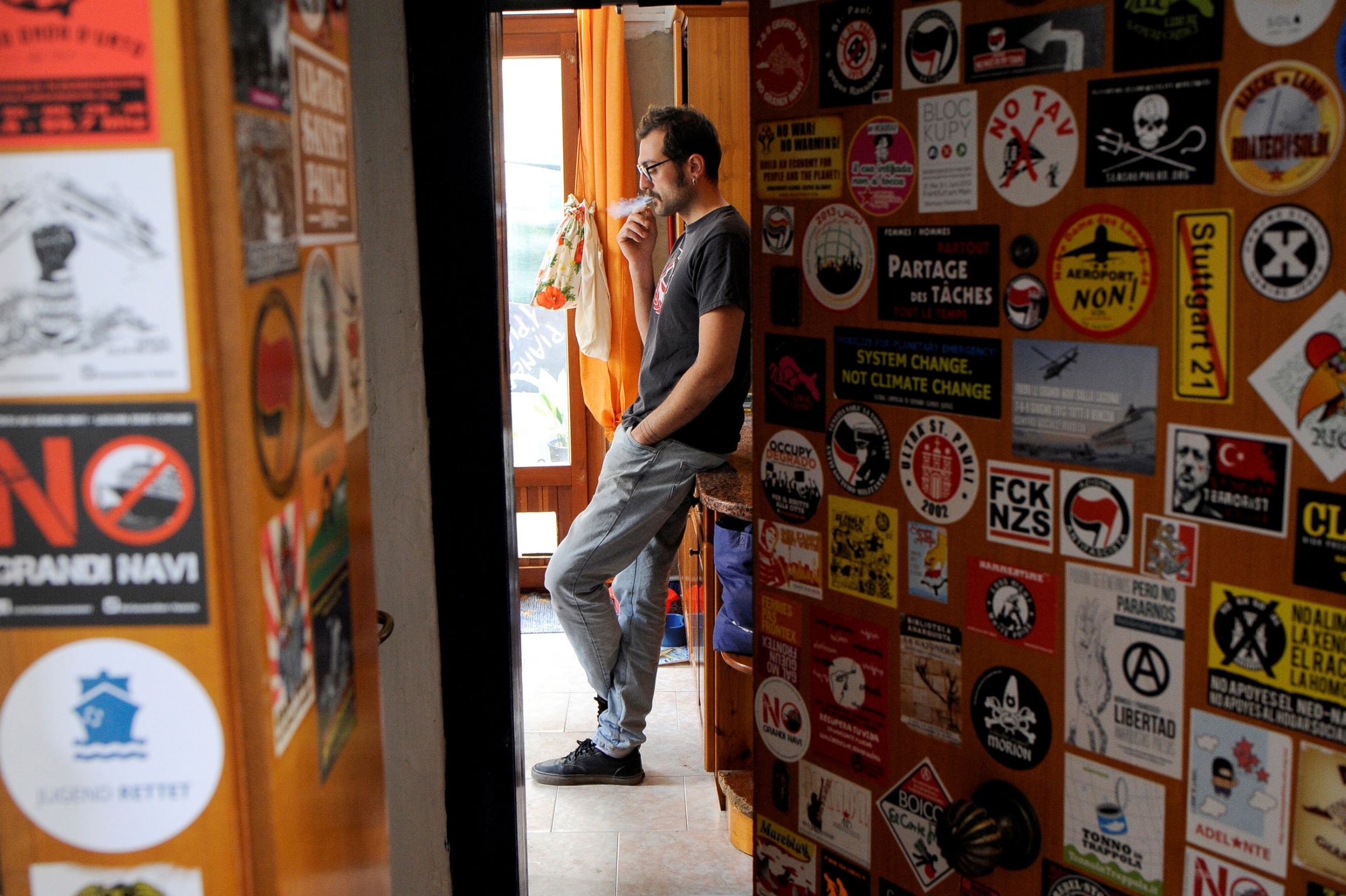 Pasquale Ambrogio, 33, smokes a cigarette in his illegally occupied apartment in Venice. "I moved to this apartment seven years ago. I can't afford to pay a rent in Venice but I don't want to leave the city. I consider myself a resisting citizen," Ambrogio said.

This year, Venice council voted to impose an entrance fee for visitors to help pay for the upkeep of the much-visited World Heritage Site and maybe help limit the numbers. 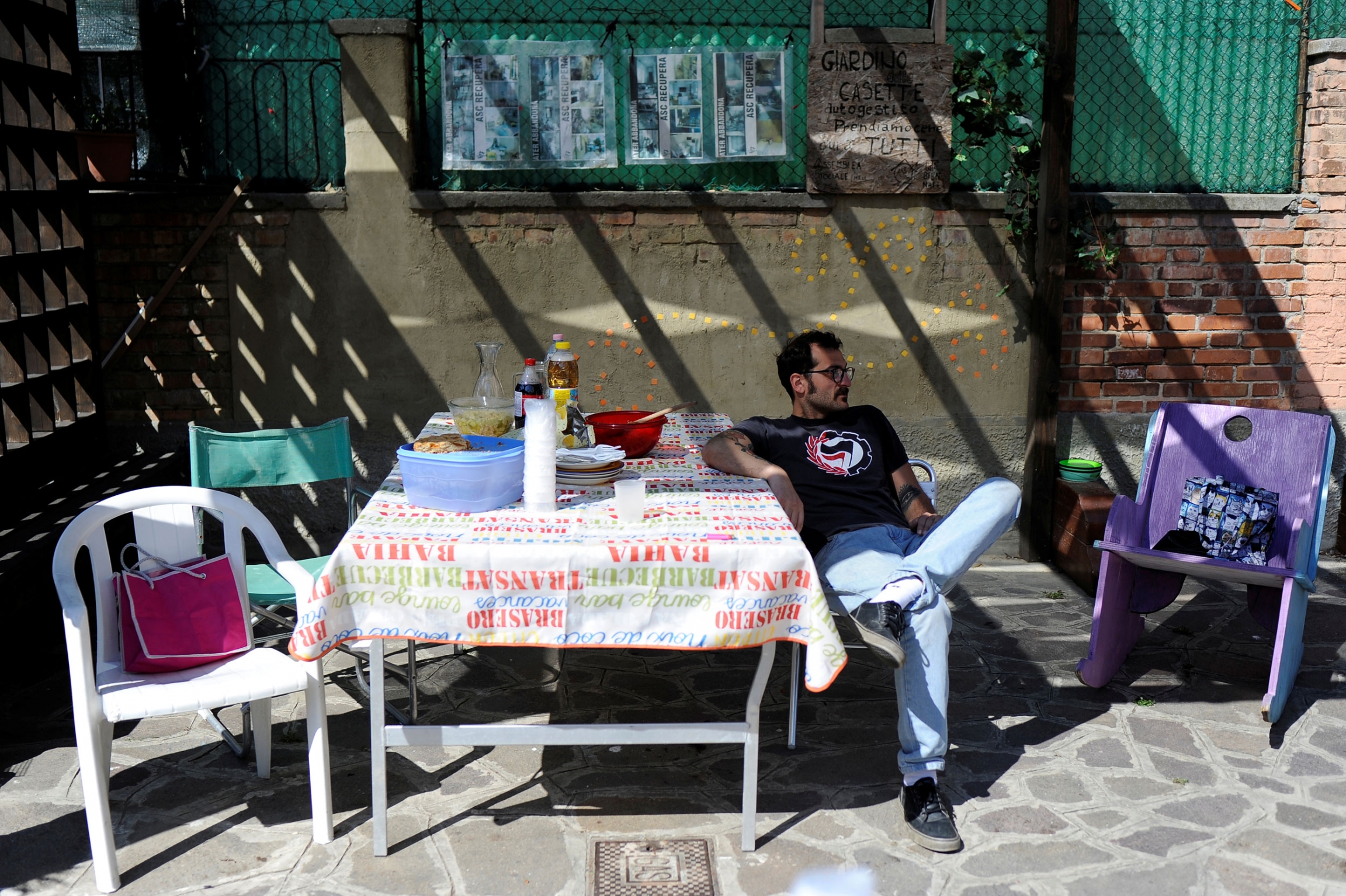 Pasquale Ambrogio sits outside his illegally occupied apartment during a lunch organized by squatters in Venice.

While acknowledging that "Venice risks extinction", regional housing agency chief Raffaele Speranzon denounced the squatters for taking matters into their own hands, saying they are jeopardizing the fair allocation of homes. 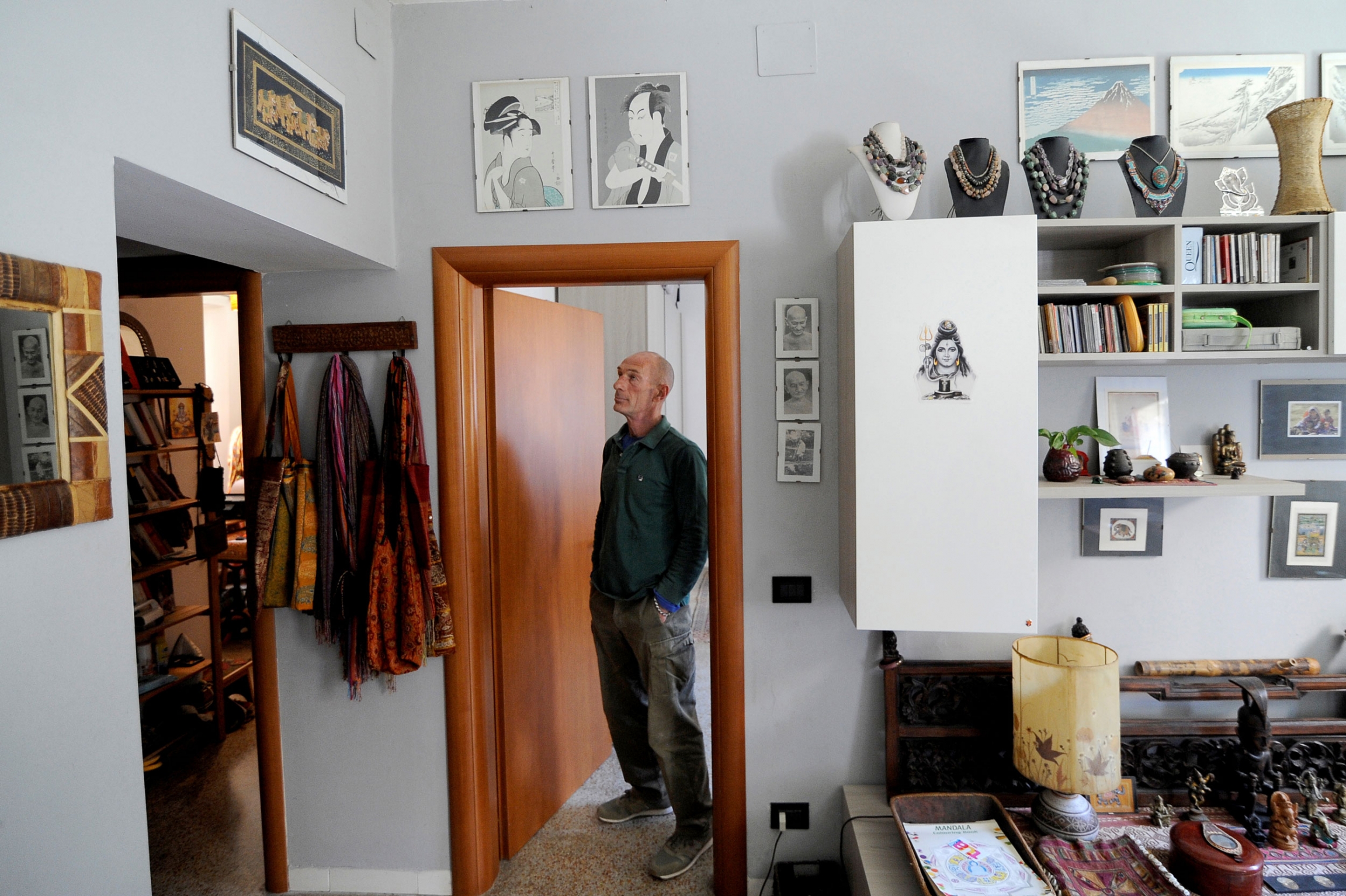 Carlo Spinazzi, 59, looks on in his illegally occupied apartment in Venice.

"We have funds which come to us from the region in order to maintain these buildings but frequently we can’t use this money because the houses are occupied. In effect these are houses extracted from the community," he said. "Often they are passed out between friends, ignoring people who want to follow the rules or request apartments in a legal manner. It is like jumping the queue at the check-out till." 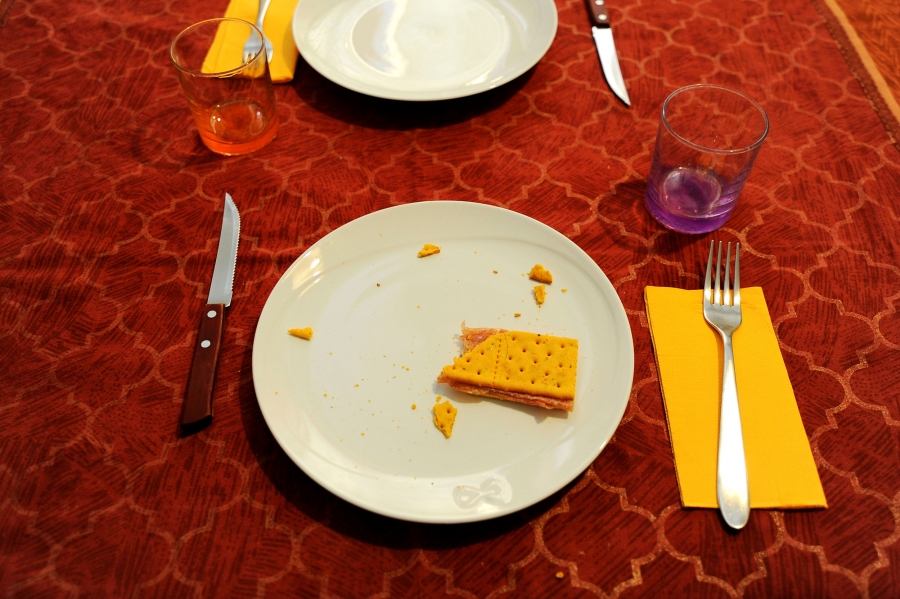 A snack is seen on the table of Carlo Spinazzi's kitchen, in his illegally occupied apartment. "I am living with some savings I got from the closing-down sale of my shop that went bankrupt one year ago and from a family loan. But I am running out of money and I can't find a new job as I am considered too old," Spinazzi said.