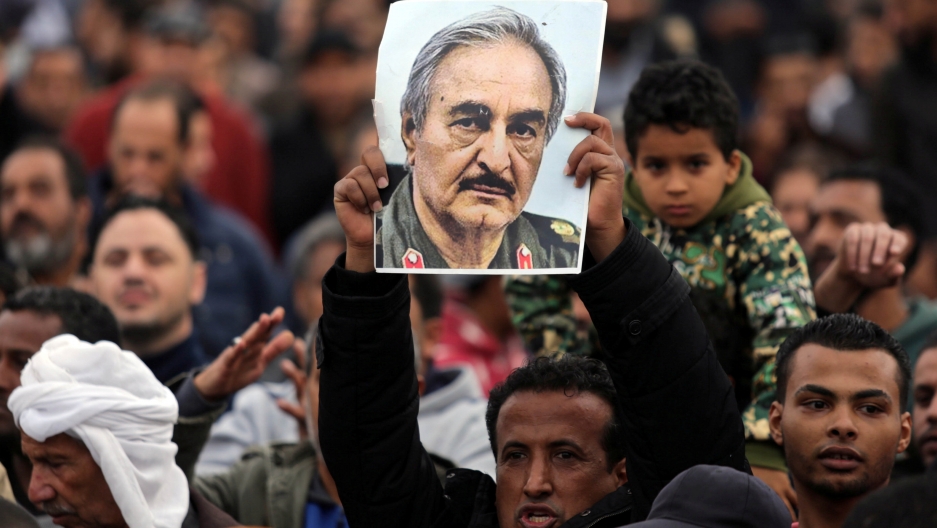 A man holds a poster of eastern Libyan military commander Khalifa Haftar during a rally in Benghazi, Libya, Dec. 17, 2017.

Eastern forces and troops loyal to the Tripoli government battled on the outskirts of Libya's capital on Wednesday as thousands of residents fled from the fighting. The Libyan National Army (LNA) forces of eastern commander Khalifa Haftar held positions in the suburbs about 7 miles south of the center. Steel containers and pickups with mounted machine-guns blocked their way into the city.

Residents reported LNA planes buzzing Tripoli as anti-aircraft guns fired at them. On the ground, Haftar's forces were fighting Prime Minister Fayez al-Serraj's soldiers at the former international airport, witnesses said. Dozens of Libyans have been killed since the assault began last week, and thousands of people have fled their homes.

The Libyan general leading the assault on Tripoli has a long history as a fighter going back to his days alongside a young Muammar Gaddafi.

Haftar is currently trying to wrest control of the Libyan capital from Prime Minister Fayez al-Serraj, leader of the internationally recognized Government of National Accord of Libya. At age 75, Haftar is no upstart. He's been present for many key moments in modern Libyan history.

In 1969, he was one of the military men who helped overthrow Libya's King Idris. He helped launch Gaddafi to power that year.

"A long part of his career was as a very obedient, loyal subordinate to Gaddafi."

"A long part of his career was as a very obedient, loyal subordinate to Gaddafi," said Jalel Harchaoui, who studies Libya's politics and security situation. "[Haftar] participated in the 1973 Yom Kippur War against Israel, and he was deeply appreciated by President [Anwar] Sadat of Egypt. He received a medal."

In 1987, Haftar led a Libyan invasion force into neighboring Chad and was captured and imprisoned by Chadian forces. Gaddafi did not negotiate for Haftar's release.

"He said, 'I don't know who those people are. Those are traitors,'" said Harchaoui, a research fellow at the Conflict Research Unit of the Clingendael Institute in the Netherlands. "[Haftar] was humiliated by Chad, on the one side, and by his own boss on the other. And that is the starting point of his political career."

Harchaoui says Haftar, after being abandoned by Gaddafi, was rescued by the US. "William Casey, the head of the CIA, had this idea of creating a Libyan force on Chadian soil to be able to conduct an attack, an incursion, into Libya and hurt dictator Muammar Gaddafi ... They went to Haftar and they said, 'If you want to be free you have to work for us.'"

The US plan to overthrow Gaddafi failed.

In 1990, Harchaoui says, the US airlifted Haftar and hundreds of his fighters to Virginia, and for the next 20 years, Haftar called the US home. He even got US citizenship. Haftar finally went back to Libya in 2011, just as the Arab Spring began. President Gaddafi, his former boss, was captured and killed, and Libya slipped into chaos.

In the following years, Haftar made a name for himself as a military strongman. He patterned himself after the Egyptian general, Abdul Fattah al-Sisi, who brought stability — and authoritarian rule — to Egypt by leading a campaign to eliminate the Muslim Brotherhood. Haftar followed Sisi's example, defeating Islamist fighters in Libya's eastern city, Benghazi.

"He was able to project that image, and Libyans are so fatigued because of all the disorder — eight years of disorder. They know he's authoritarian, but they think  —  and I respect that — they think that he is going to expand a national army over the entire territory. It's not going to be liberal or democratic but at least it's going to be unified."

"He basically fit the bill," Harchaoui said. "He was able to project that image, and Libyans are so fatigued because of all the disorder — eight years of disorder. They know he's authoritarian, but they think  —  and I respect that — they think that he is going to expand a national army over the entire territory. It's not going to be liberal or democratic but at least it's going to be unified."

Related: Libya now has three governments, none of which can actually govern

Harchaoui says Libyans — until now — had grown accustomed to weak governance and social instability. "There was some kind of equilibrium that a lot of people had begun to take for granted." But that changed when Haftar began his march on Tripoli.

"It's very important to recognize that what we're witnessing is a full-blown civil war," Harchaoui said. "Both camps now are lashing out, trying to save face, using whatever military means they can, and this is a very dangerous dynamic."